Passing drivers and people passing by is not without interest observed in the Parking lot near the complex there are numerous cars and to the main entrance an endless stream of adults coming with their children. That is a Grand final event at our office swimming organized by the coaching staff together with the pupils gathered in the sports hall of the “left Bank” is the number of adults and children.

Sounds festive music, are the final preparations…And the music gets quieter, the word takes Daria Prokhorov, who gives the command to the Grand opening. Rhythmic music ran out pupils with flippers on his feet and goggles on his head, and for them leads an impromptu hunt their coach Anton Boldovsky in the role of dancing hunter. This is so cool looking, that the audience applauded incessantly. The guys ran out into the center of the room and warmed up the audience so that the charge will last all the excess. Bravo, Anton, Bravo kids!

Further applause was awarded to the coaching staff, who for many years brings and will bring victory to the glory of the Volkhov and the Volkhov area: Nina Samoylova, Valentina Borisovna Bogdanova, Larisa Prokhorova, Darya Yurevna Prokhorov and Anton K. Boldovsky. The children congratulated their coaches and presented them with flowers.

After that, the audience asked the Director of FSTS Volkhov A. M. Tsvetkov: “I congratulate all of those victories that brought us the 2017-2018 season. Grateful to parents who stubbornly, persistently and demanding to take their children to ensure that they achieved good results.” Head of Department for physical culture and sport of administration of the Volkhov district, O. V., chegodaeva, head of testing center rules TRP T. G. Borisov, and the Director of ANO “BLACKBIRD-Volkhov” M. I. Gowdy thanked coaches and parents, they admired the results that show the pupils of office of navigation, rejoiced in their achievements and proud of the Volkhov swim school, has earned recognition at the highest level. Coaching staff offices diving FSTS “Volkhov” for professionalism and high achievement in the competition awarded a commemorative diploma from the district administration. The diploma took Larissa Prokhorov, who founded the glorious traditions of sailing in our city.

Tatiana Borisova was awarded the best who managed to pass the test, and thanked all the athletes who honorably and victoriously helped to defend the honor of Volkhovsky district at the regional level in the delivery standards TRP. Michael Gowdy expressed hope for further fruitful cooperation between “BLACKBIRD-Volkhov” and FSTS.

Next, leading Anton and Daria began to congratulate the swimmers, declaring their merits and awards obtained water-track competitions of various level. I think that to list all those who contributed to this Grand success, not enough time nor space in any printed edition. Let me just say that it was unforgettable and perfect! Minutes of fame and well-deserved awards were interspersed with a variety of colourful rooms and performances prepared by the pupils of office, and at the end of the event there was a colorful dance flash mob. 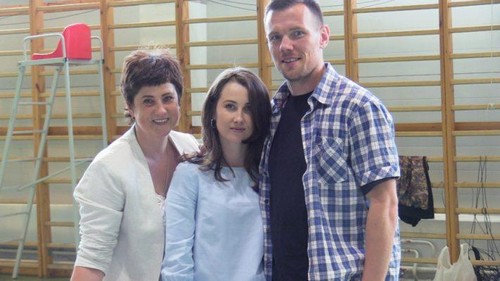 The coaching staff thanked the parents throughout the swimming season was near and helped in any situation. The link between generations was felt in every second and in this – the key to victories and successes just swimming in our city. Vivat, Volkhov, Vivat, swimming!