Pedro Caixinha has been dismissed as Rangers manager just seven months into his tenure at Ibrox following a poor recent run of results.

Rangers board met on Thursday morning to discuss Caixinha’s future and the decision has been made to dismiss the Portuguese boss from his position.

Chairman Dave King was pictured outside Ibrox after the unscheduled board meeting. King was believed to be joined by Stewart Robertson, Andrew Dickson and Graeme Park at Rangers’ home ground.

Rangers confirmed the news in a statement released on their official website and said the search for a new manager will begin immediately.

The club have acted swiftly after the latest in a string of disappointing results saw Rangers draw 1-1 against Kilmarnock on Wednesday night.

Rangers missed a penalty at 1-0 up before conceding a late equaliser, a draw which saw them slip to fourth place in the Scottish Premiership table. 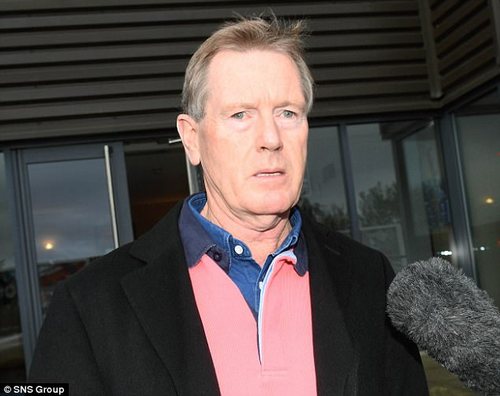 Pressure had mounted on Caixinha after last Sunday’s Betfred Cup semi-final defeat by Motherwell and the Kilmarnock draw has proven to be the last straw.

Following Wednesday night’s result, Caixinha insisted he was still the right man for the job, saying: ‘I am strong enough to take things forward and always look to put things in the right place’.

But the 46-year-old has since been removed from his position after just five wins from their opening ten league games of the season.

Caixinha was appointed as Rangers manager in May and oversaw 14 wins from his 26 matches in charge of the Glasgow giants.

‘Pedro Caixinha has left the Club. The decision to part company with Pedro was taken after careful consideration and the search for a new manager will begin immediately.

‘Pedro was appointed in March this year but results have been disappointing and not commensurate with the level of investment that was made available.

‘Graeme Murty, head development squad coach, will take charge of the first-team in the interim, just as he did earlier this year.

‘The priority is to appoint a new manager as quickly as possible, but the Board will take as much time as is necessary to secure the right person capable of representing Rangers and providing the brand of football supporters rightly expect.

‘We, the Board, appreciate this is a difficult time for all Rangers supporters and we thank you for your patience and know Graeme and the players will receive your full backing in the days ahead.

‘We thank Pedro and his backroom staff for their efforts and commitment and wish them well for the future’.