RB Leipzig sporting director Ralf Rangnick sparked a row with Bayern Munich’s players on the stroke of half time in the German Cup in a bizarre turn of events.

Rangnick strolled onto the pitch and attempted to show the referee a replay with his phone. The referee had awarded a penalty to Leipzig but pulled it back for a free-kick.

The Bayern players reacted angrily at his attempts to influence the referee and Mats Hummels had to be separated from him by Naby Keita.

Scroll down for video… 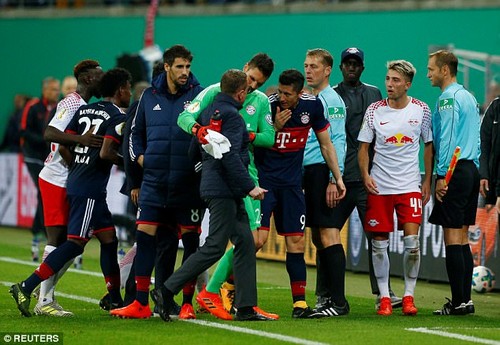 The shoving continued as both sides and officials head down the tunnel.

And the fractious behaviour continued in the second 45 minutes as Liverpool-bound Naby Keita was given his marching orders for his second yellow card.

There is clearly no love lost between the two sides who now enjoy a feisty rivalry with Leipzig a real threat to Bayern’s dominance. 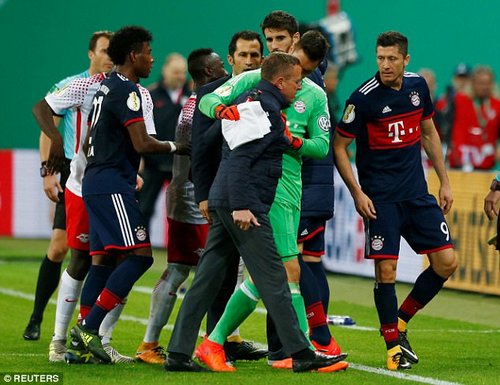 It all kicked off during half-time between RB Leipzig and Bayern Munich ?

Ralf Rangnick has his own VAR system… on his phone ? pic.twitter.com/BZgh7HYfN3

Ultimately it took penalties to separate the two sides and replays showed it was the correct decision to award a free-kick rather than penalty.

Sven Ulreich was the hero as the Bayern stopper kept out Timo Werner’s tame spot kick.