Australian Richie Porte has pulled out of the Tour de France after damaging his shoulder in a crash 10 kilometres into the ninth stage, a 156.5-km ride from Arras on Sunday.

The BMC Racing rider, who also crashed out of the Tour last year, was one of the main contenders to finish on the podium in Paris.
Porte finished fifth overall in 2016.

He was sitting 10th in this year’s race, 57 seconds behind yellow jersey holder Greg van Avermaet of Belgium.

His team tweeted: “We can confirm that @richie_porte is on his way to hospital for examination. No one could have imagined this is the way Stage 9 would have started but we still have 7 riders in the race and we are behind them 100% of the way.” 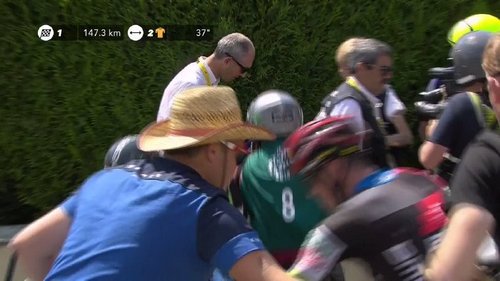 CRASH. @richie_porte goes down badly with a big group of riders. It looks serious and that could be an absolutely heartbreaking way for his race to end

Porte won the Tour de Suisse in the build-up to the Tour to suggest he was in perfect form but the 33-year-old, a renowned one-week stage racer, has struggled to hold it all together over three weeks in a Grand Tour.

The former Team Sky rider crashed out of last year’s Tour on stage nine as well, having seen previous tilts at the 2015 Giro d’Italia and the 2016 Tour ruined by mechanical issues and illnesses.