Fresh from shooting a course record 61 at the most iconic golf course in the world, Ross Fisher lifted the pull-tab on how a golfer celebrates a fine week on the links. In Fisher’s case, judging by the picture he shared of his fridge, that might consist of enjoying a little beer, wine, champagne, gin and tonic, Baileys and… Special Brew.

‘Nice to come home to a full fridge #balanceddietmrsfisher’, joked the 36-year-old Englishman as he shared the amusing image after finishing runner-up to Tyrell Hatton in the Alfred Dunhill Links Championship.

Ross Fisher enjoyed showing off his fridge, which was jam-packed full of booze 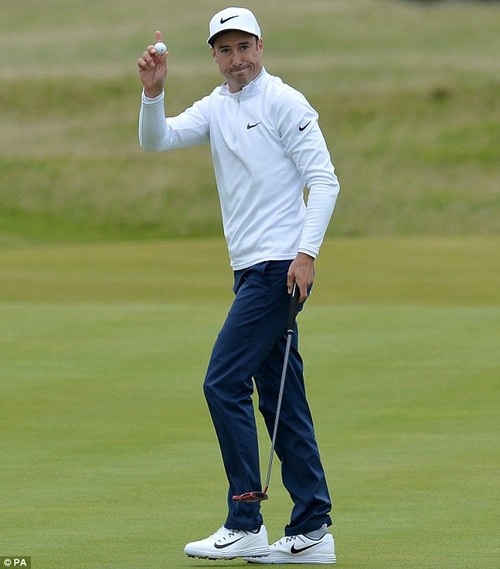 The Englishman shot a fabulous, new record 61 on the Old Course at St Andrews on Sunday

And yes, Fisher’s jam-packed fridge full of booze even contained Special Brew, the strong lager (its ABV is a whopping 8%) that can only be described as an acquired taste and is often associated only with those wishing to get very drunk, very quickly.

Of course Fisher is not likely to have that motive in mind, or have drunk all of those types of drink in one sitting – besides, he also appears to be pinning the blame for all the booze on his wife, Joanne.

He does, however, look well prepared to host a party when his next tournament victory arrives. But as the former Ryder Cup player’s last win on tour was back in March 2014, perhaps he’s been stocking up ever since?

Fisher hits a drive on the world-famous 18th hole during the Alfred Dunhill Links Championship. Fisher finished runner-up to Tyrell Hatton but looks like he enjoyed celebrating his fine week

Fisher is in a strong position to qualify for a second Ryder Cup appearance after his good show at the Dunhill, which is played on three Scottish courses – Kingsbarns, Carnoustie and the Old Course at St Andrews, where he shot his remarkable 61 on Sunday.

Former world No 1 Luke Donald was certainly impressed by Fisher’s performance, tweeting: ‘Got to witness history today playing alongside Ross Fisher as he flushed his Mizuno’s to a course record 61. Well played Ross.’

It is early days in the race for a place on Thomas Bjorn’s European team at Le Golf National, however, and the world No 45 will probably need to end that long wait for a win over the next year or so to claim a place in the side.

But the good news is that while he’s experiencing something of a victory drought, he’ll never go thirsty judging by that fridge.