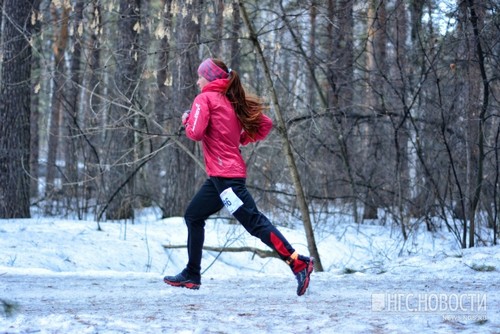 Today, on world health Day in Novosibirsk was held the spring festival of running “Hello, April.”

The event was held in Central Park on the territory of the ski base “the locomotive”. The event was organized by the Novosibirsk school of running “ABEGA”.
The forum starts in a matter of seconds

For many runners, “Hello, April” was the opening of the summer season after the long Siberian winter. Some participants noted that the track was difficult due to the abundance of loose melted snow.
Runners Maxim Kochergin keeps the pace!

“We have tried to include in the program of the competition distance for every taste. Experienced runners chose 10 km, beginners and fans of fast running tried his hand at a distance of 6 km, while the most young participants competed at small distances of 800 and 1600 meters.
Although the distance was short enough, simple can not call them. Hard snowy trail today turned into a dirty mess.

Participants had to exert a lot more effort than when running on pure asphalt,” comments Olga Novoselova, a representative team of organizers of the event.
General warm-up before the start

In total, the race was attended by over 100 people from 5 cities of Russia, and there were also guests from the Republic of Kazakhstan.
Runners Sergey shablikin catches balance

On the longest distance, 10 miles, quickly turned novosibirets Evgenie Jakub and Olga Veselkina from the city of Belovo. The finish line at the distance of 6 km was the first to reach novosibirets Andrey Roik among men and Anna gutova from Belovo among women.
A team of fans of run “ABEGO” after the race

The youngest participant of competition was Fokin Svetoslav, who will soon turn 3 years. The adult was Nikolai Vaschenko, at the age of 58 years.
The youngest helped their sport parents – as best they could

In addition to awards in individual competition, was the “family test”, which was won by family Baranovych and semyonovykh. All winners, prize-winners received gifts from the organizers and partners of sporting events.