The wolf Zabijako can be seen in the sky over the airfield of Krutitsy in the Ryazan region.

Bright performance in the image of the mascot of the world Cup staged a famous parachutist from Voronezh Galina Klastava.

Girl costume included a souvenir hat, t-shirt with the symbols of the world Cup, socks and sneakers. And the left leg was attached to a soccer ball. 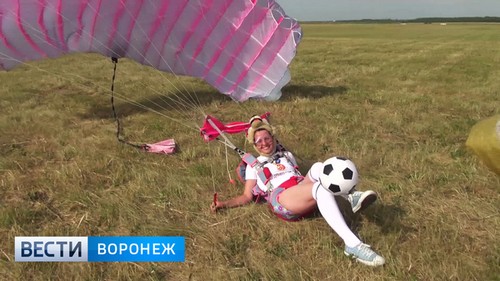 Despite the fact that I had to jump from a height more than 4 thousand meters, the way Zabivki managed to keep to the landing. For this the ball tied to his left leg with tape, thread and laces.

After Igor Akinfeev left foot repulsed decisive penalty in the match with Spain, friends parachutist saw this, nothing less than a prophecy. But she says that this is nothing more than an accident.

At the time of the 2018 world Cup to fans a visa-free regime. On the Belarusian-Russian border, a temporary inspection and registration. How they work, learned DW.The day before the start of the world Cup, which started in the Russian capital on 14 June, on the Belarusian side the border crossing point “Red” on the highway Brest-Moscow grew 15-kilometer queue. As explained later, the representatives of Smolensk customs, it was connected with the mass arrival of football fans on the eve of the first match of the 2018 world Cup. For fans dedicated a separate lane, which trucks were forced to stand.

Special treatment at the time of the 2018 world Cup

Now the queue is gone, but the entry of foreigners to Russia via the Belarusian border is not without problems. But to the surprise of the Russians, the guards stopped every car and subjected to inspection even cars with Russian registration.

29 may foreign Minister of Belarus and Russia signed an intergovernmental agreement on “sports bezveze”, according to which Belarus initially allowed visa-free travel through its territory to fans who go to matches in Russia from June 4 to July 25. A year later, Russia agrees to set the same mode for arriving in Minsk for the second European game with 20 to 30 June 2019.

Therefore, from the beginning of the championship in Russia – the control of the Russian side in the “Red” has become much tougher. First of all, catches the eye is the abundance of cars of traffic police on a half-kilometer stretch of the border crossing their duty just three. Increased the number of border guards, they are now approximately twice more than usual. Despite this, in the “Red” in the early days was a waiting list of fans.

Rules for the holders of Fan ID

Instead of a visa foreign nationals are required to provide to border control with your passport personalized map viewer Fan ID is the so – called “passport fan”, which is issued after the purchase of tickets for the matches. All Fan ID are registered only at the border of Russia.

Point of inspection and registration of fans consists of four small kiosk right on the highway border crossing, for which dedicated one of the road lanes.

However, visually on the border of Russia and Belarus is nothing like that in Russia is football world Cup. No signs or signs for fans to find failed. Only in one of the Windows security hung a small poster with the rules for completing “passport fan”.

Polite guards, but do not know English

By the beginning of 2018 a temporary checkpoint could not cope with the influx of fans. But in the following days, “sports bezviz” not without incidents, the witness of one of them was the DW. Last Friday, the citizen of China, Jiang Qi Ming arrived at the Russian border station of the Red diesel train from Orsha.

He already had bought a ticket on the train for further journey through Smolensk to Moscow. But with the passage of mandatory passport control fan from China was stopped by Russian border guards. Guest of the championship was very concerned when his train went to Smolensk without him. At first he thought he decided to return to Belarus.

The border guards were very polite, however none of them appeared to not speak English. In Russian, they tried to explain to a Chinese national registration procedure and made to follow them on their official car to the inspection station on the highway, promising that then he will travel on a special bus.

They took his passport and ID Fan, which caused the alien to panic. At the point of inspection, as it turned out, despite the large number of security officers that no one speaks foreign languages. Check lasted about an hour, and then it turned out that bus no. Jiang Qi Min continued on his way to Russia at the nearest ride, which was stopped by guards.

The exception is for the fans

With the appearance of the shift supervisor all the talk of guards was sharply curtailed. More stringent was the prohibition of photography, and the DW after careful review of the documents was “notified” about the necessity of accreditation of the Russian foreign Ministry to obtain the right to ask questions.

Only the duty of the border Department of FSB of Russia across the Smolensk region has agreed to clarify that foreign nationals, without a Fan ID still required to enter the territory of Russia through the international checkpoints, and “Red” is not.

This means that even athletes and members of sports delegations do not have the right to go to Moscow via Belarus, they are required to obtain a Russian visa and enter Russia from other countries.