When Ahmed Fathi sends the ball into his own net, the crowd just explodes.

Broadcast of the match “Russia – Egypt” on the Admiralty square, have set an attendance record. Watch the game, the team drew thousands of fans. Together with Voronezh citizens for a tense match watched by the Egyptians. In the stands there was an atmosphere of a real football feast.

Half an hour before the start of the match empty seats on the podium anymore. People, meanwhile, continue to arrive. In anticipation of the football festival, the audience is entertained by rock musicians. Fans from Egypt, which at the Admiralty square is suddenly a lot, arrange a concert. 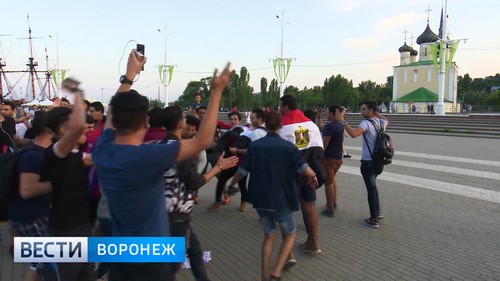 – Egypt today will be better – said, a native of Egypt, a resident of Voronezh Ibrahim.

The voltage of the first half is transmitted to the fans. Before the break, the gates remain unopened.

Russian fans are so focused and know exactly what they want. The Egyptians noisy, emotional, and ready at any moment to dance.

In the second half the pattern of the game changes radically. When Ahmed Fathi sends the ball into his own net, Admiralty area just explodes.

The Egyptians do not sing, but still do not lose optimism. Their mood is completely spoiled, when after only 12 minutes, the Admiralty area explodes again. 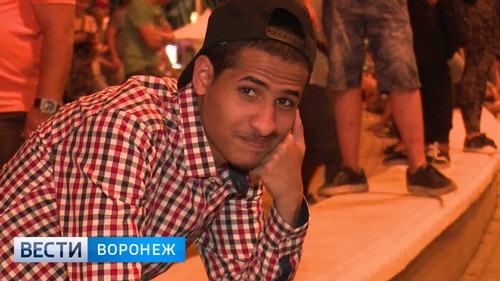 And after the third goal the fans from Egypt it became a pity to watch. They perked up a little after scoring a penalty against the national team of Russia, but it already changed nothing. Our team wins a football stream on Admiralty square sets record. According to the police it looked nearly 7 thousand people.

Exercises on the eve of the World Cup was held at the site Pogonovo.

On the range Pogonovo Riot units of transport were trained to act during emergency situations. These field exits arrange two times a year – fall and spring. It is always a test of strength, character and cohesion of the squad.

On any job the first eager engineers – they check the road. According to legend, in the way of the Riot police found an explosive device. Specialist it neutralized. And then – a sudden attack. 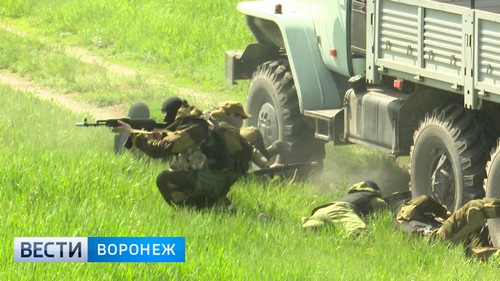 Enemy lurks in the forest. The assault team goes into bypass, while others are taking heavy fire.

In this work, the main thing, according to the troops themselves, the confidence in each other, their on the pitch not throw. The evacuation of the wounded is one of the most important exercises. By the way, recently to the task of Regardie added another protection of higher officials of the region. The tactic was developed independently.

All you have to look for yourself counsel acting almost there, so Lopatin material. Accordingly, there is a desire – let us learn all. This should work as a single mechanism. This is the same car as a watch. Because what’s at stake are the lives of soldiers, the lives of employees, and we depend on each other, no matter what rank, and what one position, – said the commander of the operational platoon of riot police on the transport Control Regardie in the Voronezh region Dmitry. 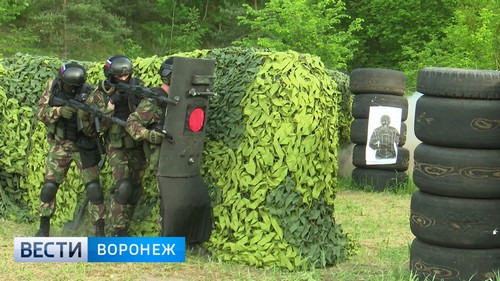 Special forces are small. Getting there can be only strong guys, both physically and mentally. Psychological stability is paying even more attention than the muscles. There is a kind of career guidance – over time, you can learn about different occupation: sapper, sniper or a dog handler.

Candidates come mostly for the posts of police-men. And has been for some time, if space is available, we look at the candidate and offer him the position for which the employee should have a certain skill, needs to perform certain tasks, – said the assistant commander for work with personnel of SWAT transport Management Regardie in the Voronezh region Alexander Tokmakov.

This summer will be for special forces especially hot – because of the World Cup. Within the area of responsibility of the Voronezh Riot police on the transport will pass a huge number of fans. In an impromptu car work out the detention of the offender. 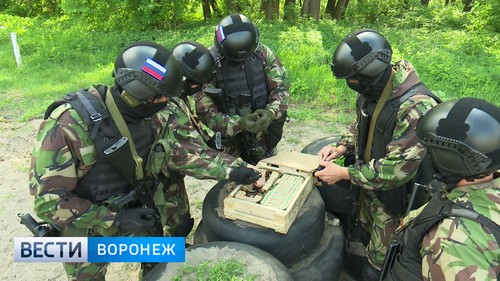 – Such a big event in the country is rare. And hence the implementation of the tasks imposes a special responsibility. Moreover, in 11 cities will host matches of the World Cup. Between these cities, except for air transport, there will be more to move trains for the fans. Each train will be accompanied by police officers, with the participation and with the power support of employees of Regardie, – the commander of the riot police on the transport Control Regardie in the Voronezh region Vladimir Radomski.

On the territory of the Central Federal district only two towns stationed riot police on transport in Moscow and in Voronezh. Therefore, the responsibility of our big fighters, they operate in five neighboring areas. In addition, close to the state border and its protection is also included in the tasks of Regardie.

After field release, the fighters will return to the everyday tasks. A detachment of mobile special purpose, because so called that they are always ready to provide support where it is needed, whether it be support at events or the apprehension of dangerous criminals.