Jan Vertonghen said he is ‘immensely proud’ after becoming the most capped player in the history of the Belgium national team.

The Tottenham Hotspur defender made his 97th appearance for the Red Devils in their Tuesday night 2018 World Cup qualifier against Cyprus.

This took him beyond the previous Belgian record, held by attacking midfielder Jan Ceulemans who played in the side which came fourth at the 1986 World Cup. 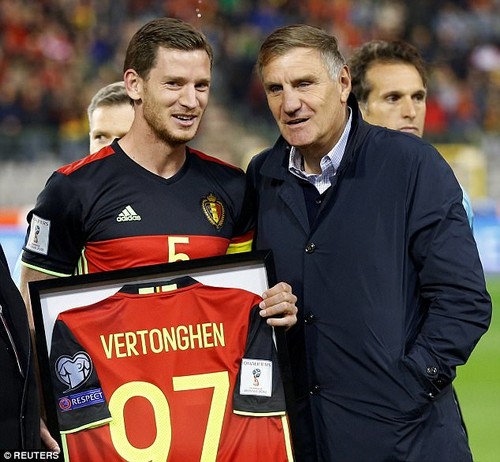 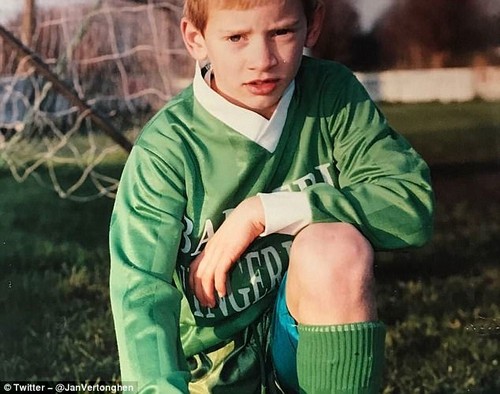 Ceulemans was at the centre of the presentations before the game, handing Vertonghen a special framed Belgium shirt with 97 on the back.

After the game – which Belgium won 4-0 – Vertonghen wrote on Twitter: ‘A very special night. Immensely proud and honoured to be the most capped Belgian.’

He then shared a picture of himself as a child in a youth team’s football kit, commenting: ‘I’ve come a long way since this’.

After the game Vertonghen (centre, hidden) was at the centre of celebrations in Brussels

After the game at the King Baudouin Stadium, the players celebrated with the crowd after easing through their group with nine wins and a draw from 10 matches.

Vertonghen was at the centre of the party, and was carried shoulder high by team mates in a squad among the favourites to go all the way in Russia 2018.

Belgium – the first side to successfully come through the European qualifying section – rounded off their campaign with a double from Eden Hazard, a penalty by his brother Thorgan, and a late strike by substitute Romelu Lukaku.