For three boys in the Kenyan team, taking part in the Street Child World Cup in Moscow has meant swapping their prison shirts for football kit. The teenagers were released from a juvenile detention centre to play in the tournament and will serve out the short time left on their sentences back in Mombasa. Their crime: being on the streets.

“I had to fight really hard to get permission to bring them, but I wanted to give them a really positive experience,” says the team’s manager, Frederick Achola, from the Glad’s House organisation.

Based in Mombasa, Glad’s House campaigns against the criminalisation of street children in Kenya, particularly the practice of sending them to detention centres thousands of miles from the areas in which they have been living, if there is no space nearby. 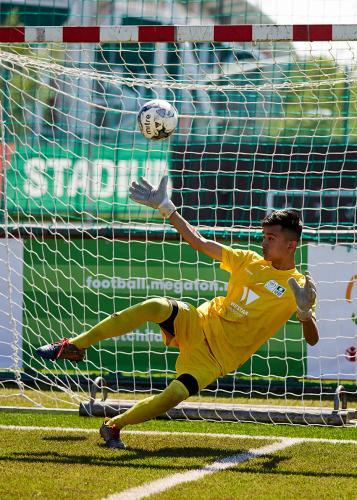 The 10-day tournament aims to raise awareness of homelessness among young people and challenge negative stereotypes about vulnerable children at risk on the streets. This year, 12 boys’ teams and 12 girls’ teams took part in the event, representing 24 countries, including Belarus, Egypt, Kazahkstan, Mauritius, Nepal, Russia, Tanzania, the UK and the US. Uzbekistan took the trophy for the boys, and previous winners Brazil lifted the cup for the girls. All the matches were played at the home of Russian Premier League champions Lokomotiv Moscow.

In addition to the football, the children take part in a congress on children’s rights and a mini-general assembly on the final day of the competition, where they call on governments to protect their rights to education and identity documents, as well as their rights to safety from violence.

Getting a passport to attend the event can be far from easy for many of the players, particularly those lacking papers who may not know their birthdate, or those who are orphaned. This year, a team of girls from Casa Alianza in Mexico City – which included victims of trafficking, violence and sexual abuse – were only allowed to travel after two court hearings, because obtaining permission from their parents was not possible.

The story of the young Kenyan hopefuls who traded a prison cell in Kenya for a football pitch in Moscow was just one of the many remarkable tales to emerge from the combined tournament and congress on children’s rights, which took place in the run-up to the World Cup in Russia. More than 20 countries were involved, with defending champions Brazil lifting the girls’ trophy and Uzbekistan the boys’.

Since its inception in 2010, the competition has acted as a springboard for street children to speak out on rights and work with other vulnerable teenagers. The players are all either homeless, have spent time living on the streets or are considered at risk of doing so. Here, young people from Brazil, the Philippines and India share their experiences.

I lived on the streets in north-eastern Brazil for two or three years. After my parents got divorced, I went to live with my father. He used to smoke crack, and when I was around 11 I decided to leave his house and live on the beachside Beira Mar, near the fish market. We would beg food from the local restaurants and beach kiosks.

I made a lot of friends and we’d all look out for each other but it was really dangerous. People would drive by and sometimes shoot kids living on the streets – we never knew if they were bandidos gangsters or the police. I lost friends like that. I did drugs every day, marijuana and cocaine, but I never got into crack. You just begged for money and saved up enough to go into the favela and buy drugs. The worst thing was the way people looked at you, unwashed and in dirty clothes. Sometimes they’d call the police.

Eventually, my mother’s cousin heard I was on the streets and got in touch with a charity that works with homeless children. They persuaded me to go and live at their shelter in the countryside. I stopped doing drugs and went to classes and started taking part in sports events.

In 2016 I took part in a mini-Olympics in Rio … I even won medals. But when I got home my friends called me to go train surfing in Fortaleza and I fell off and a train went over my leg. It had to be amputated. But it’s only a leg and I still have my life.

Now I am studying and living with my mother again. She is not worried like she used to be when I was on the streets, fearing that I might die at any moment. My dream would be for every child in Brazil to be able to live a dignified life, with protection from violence.

I grew up in Payatas, one of the poorest areas of Manila. I used to scavenge on the rubbish dump for stuff to sell to support my family. For many families in Payatas, life revolves around the dumpsite. Like a lot of other kids, I would scavenge in the mornings and then go to school in the afternoons. We are 11 siblings and the money we earned from selling things we found in the trash paid for food and school. If the electricity cut out, sometimes the whole family would sleep on the streets because the house was so hot and cramped.

It was dangerous because we were always chasing the garbage trucks, and also there were lots of gang fights in the area. I drifted into gangs because my friends were in them.

Eventually I was helped by a charity and started to go to their school. They also gave me food so I didn’t have to scavenge. But football opened the doors for me and took me out of the Payatas area.

I have a scholarship to study football at university and I coach younger children. Now the dump is closing and I want the kids I am coaching to have an education so they can find other ways to support themselves.

I was six or seven when I ran away from home in Chennai, on the Bay of Bengal in eastern India. I saw a lot of violence at home because my father was an alcoholic and used to beat my mother. If I interfered, I also got a beating. They didn’t really care about us or try to send us to school so I had to get out of that house.

In the end I just got on a train without a clue where I was going and stayed on it. I survived by eating leftover food. The people on the train made us clean the floor and toilets and we couldn’t refuse. Eventually I ended up in the railway station. I’d stay there until I was chased off, so I kept moving from place to place.

It was a terrifying existence because I never felt secure. I had to steal food and if the shopkeepers caught us they would beat us and sometimes sexually abuse us. If we were caught by police they also abused us, and sometimes pinned cases that they could not solve on us so street kids went to jail for crimes they hadn’t committed.

One day, in Chennai, social workers came and started talking to me and took me to the shelter, and I started going to school. Now I coach football and would like to train to become a professional coach.

I also rescue other children from the railway station. I set myself a target of rescuing one child a day. We try to reunite runaway children with their parents … I will strive for a society with equal opportunities for all children.

Members of the Philippines team walk through a slum area to their dormitory, after a training session in Payatas, Quezon City, north of Manila. Photograph: Mark R Cristino/EPA www.theguardian.com