German footballer of Turkish descent Mesut Ozil was attacked by bikers armed with knives in an attempted carjacking in the UK. 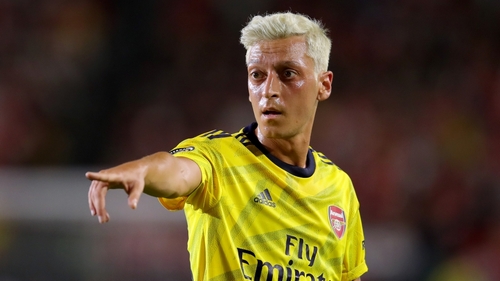 Ozil has made 92 appearances for Germany and played a key role in their 2014 World Cup victory File: Alexander Hassenstein/Bongarts/Getty Images

The 30-year-old Arsenal footballer was chased in Golders Green, north London, when the gang surrounded his black jeep around 5pm local time (16:00 GMT) on Thursday, according to media reports.

Ozil was with his teammate Bosnian player Sead Kolasinac at the time of the attempted attack.

Leaving his car, Ozil ran into a Turkish restaurant fearing for his life after Kolasinac attempted to take on one of the assailants.

Waiters and chefs from the Likya restaurant rushed to the aid of the football stars forcing the gang to flee empty-handed, the Daily Mail reported.

“As soon as the restaurant staff started to come to the window and to the doorway, they turned around and roared off,” a witness told the British daily.

An incident took place in London today where Arsenal’s Mesut Ozil was the victim of an attempted car-jacking.

An Arsenal spokesperson confirmed the players were involved in an attempted carjacking, saying: “We have been in contact with both players and they are fine.”

“Police were called to Platts Lane, NW3, shortly before 5pm on Thursday, 25 July to reports of an attempted robbery,” a police spokesperson said. “There have been no arrests.”

Celtic left back Tierney living the dream after new deal