Jonathan Vaughters, the manager of the Education First team of last year’s Tour de France runner-up, Rigoberto Urán, has voiced his concerns at the threats being directed towards Chris Froome.

“If I were Team Sky I would be concerned,” Vaughters said regarding the decision by the UCI to drop anti-doping proceedings against Froome. “Reading comments on social media from people saying, ‘Since justice wasn’t served, by the UCI and Wada, we’ll serve it from the side of the road’, that’s basically an outright threat. And it does feel the Tour promoter ASO fired things up when it’s their responsibility to protect them.”

Armed police are patrolling team hotels and have been a presence at the Team Sky and Education First hotels in the past 48 hours. Extra security was introduced at the Tour following terrorist attacks in France, but Team Sky also called in security experts from BSkyB to advise on extra measures. “It is really concerning,” Vaughters said of his anxieties over crowd control. “The amount of vitriol and anger directed at Sky is pretty impressive. The barriers need to go further down the mountain climbs, but you can’t barrier 200 kilometres of open road.”

Vaughters, a former teammate of Lance Armstrong, was a pivotal witness in the Usada investigation that exposed Armstrong’s systemic doping programme. Yet he is among the growing numbers within cycling who have attacked the lack of confidentiality in the Froome matter.

“The first thing to understand is that this was never a case,” he said. “It was a process to determine whether they should bring a case. And 99% of the time that happens behind closed doors, in complete privacy. 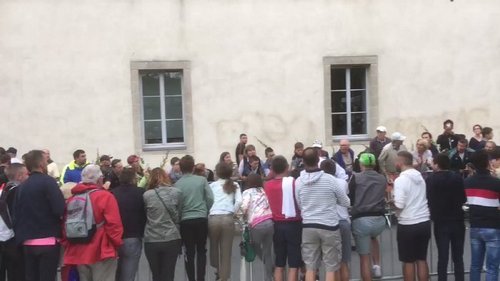 “In this case, it was public, which is really unfortunate and whoever leaked it – because somebody inside the UCI leaked it – it’s just nasty, vindictive behaviour to do that,” he said. “It doesn’t actually allow the system to work in the way that it should in a case involving a restricted substance, as opposed to a banned substance.”

Although under normal circumstances the athlete in such a case would be expected to undergo a controlled pharmacokinetic study, this was not insisted on by Wada in Froome’s case.

Sign up to The Recap, our weekly email of editors’ picks

But despite an onslaught of criticism of Wada’s procedures, Vaughters remains supportive of the anti-doping body. “I don’t think Wada is broken. The people involved in anti-doping are incredibly passionate about fairness to athletes.

“I’ve been saying for years that cycling should be throwing more money into anti-doping. I think it’s €140,000 that each team contributes to the biological passport, but that’s like a minuscule amount of Team Sky’s budget. Each team should be spending more like five per cent of its total budget on anti-doping.”

Vaughters insisted cycling has cleaned up its act, despite many believing that little has changed since the Festina affair of 1998.

“That’s just not reality,” he said. “I can say that all day long, but nobody’s going to believe it. It’s not true and I think anyone inside the sport with any genuine knowledge is going to say that’s not true. Unfortunately many people look at us all sceptically.

“I’m all for transparency once there’s an ADRV anti-doping rule violation under way. I think those should be almost like publicly open trials so that people can see the evidence. But when you’re trying to determine whether or not you’re even going to bring a case, then, come on …”

But Vaughters joined those who now think that all relevant details to the case should be made public, despite both Team Sky and Wada declining to do so. “It shouldn’t have been leaked in the first place, but it was, so live with it and now release all the information. Both sides should come to an agreement and release all the pertinent information.”

A day of glory: how the French press covered World Cup victory