The Russian national football team at Luzhniki drew 0-0 with Croatia in the 2022 FIFA World Cup qualifying round. This was the first match of the national team under the leadership of Valery Karpin.

The national teams of Russia and Croatia share the first place in the group. They have seven points each after four rounds

At the heart of the “Rostov” scheme

Before the head-to-head clash, Croatia and Russia led Group H with six points each in the starting three rounds – they were played in March 2021, before the European Championship.

In his debut game, Valery Karpin chose the 4-3-3 formation, which he liked to use when he was in charge of Rostov. The Russian national team entered the match against the reigning vice-champions of the world without a clean striker. Three attacking midfielders could have played on the edge at once: Alexey Miranchuk, Alexey Ionov and 18-year-old Arsen Zakharyan, who made his debut in the national team.

Goalkeeper Guilherme returned to the base of the Russian national team, having fallen into disgrace to Stanislav Cherchesov in November 2020 – after a major defeat from Serbia (0: 5) in the League of Nations. The goalkeeper, who had previously been the first number of the team, in the end did not even get into the application for the European Championship.

For the Croatian national team, due to an injury, midfielder Luka Modric, one of the best players in the world and the leader of the Balkan team, did not get into the application for the match. In the absence of the captain, the burden of leadership was taken on by another hero of the 2018 World Cup – Ivan Perisic.

The sharpness from the debutant and the dangerous ending

The starting minutes were spent by the teams for reconnaissance. The first dangerous moment in the match was created by the Russian national team at the end of a quarter of an hour of the game: Arsen Zakharyan took the ball in the penalty area and hit the goal in the fall, goalkeeper Dominik Livakovich saved the Balkan team. A couple of minutes later, Alexei Ionov fled to the rando with the goalkeeper, but he was interrupted by the referee, fixing an offside position.

After that, the Croats gradually began to take the initiative and the ball under their control. For a long time this was not embodied in dangerous moments at the gates of Guilherme, but at the end of the half, the “checkers” broke through. In the 40th minute, Borna Sosa hung from the flank into the penalty area of ​​the Russian national team, Mario Pashalich won the fight against the Russian defenders at the far post, but could not get on target. 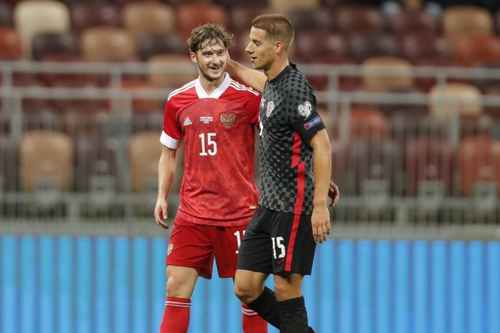 In the next attack, forward Andrei Kramaric avoided the tackle of Georgy Djikia and ran alone to the home team’s goal, Guilherme ran outside the penalty area and knocked the ball out of the striker’s feet in the fall.

But the most dangerous moment at the gates of the Russian national team was in the 43rd minute: the ball after a pass hit Ivan Perisic, the midfielder, being a couple of meters from the goal, struck against Guilherme and missed the open corner.

Rebuilding in the attack

Immediately after the break, Valery Karpin made a substitution. Instead of Alexei Miranchuk, the overall striker Anton Zabolotny entered the field, who had to cling to the balls in the fight against the Croatian defenders.

The fans did not have time to return to their seats, as in the 47th minute the Russians created a dangerous moment: Alexey Ionov struck from the penalty area, but Livakovich caught the ball tightly.

Croatia and Russia showed a generally equal game, but in the 67th minute, Valery Karpin’s idea worked. Zabolotny caught the ball in the center of the field and gave a pass to the flank to Alexei Ionov, the midfielder shot into the penalty area, where the Croatian defenders prevented Alexander Golovin from delivering an aimed strike from eleven meters.

In the middle of the half, Valery Karpin freshened up the flanks, releasing Denis Cheryshev and Zelimkhan Bakayev instead of Arsen Zakharyan and Alexei Ionov.

Both teams tried to snatch victory, but attacked with small forces. This did not stop them from creating dangerous moments. The Croatians responded to Igor Divev’s headbutt after a corner kick from Luka Ivanushets with an unpleasant blow from outside the penalty area.

As a result, the match ended in a goalless draw. Croatia and Russia continued to share the first place in the group, as in the parallel match Slovenia and Slovakia did not reveal the strongest (1: 1).

Government ordered draft of a new LDS with two arenas

Manchester City youngster Phil Foden is star in the making