Pochettino is a Ferguson disciple. He recently read the former United manager’s latest book and described a lunch with him last year as a ‘dream come true’.

‘I will always remember every detail from those hours of conversation,’ he writes in his new diary Brave New World. 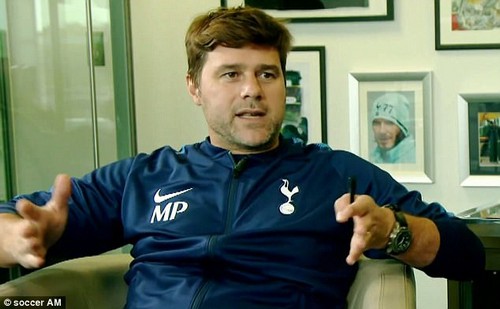 The admiration is mutual, which adds another layer of interest to any meeting between the clubs. Ferguson would have quite liked to see Pochettino replace Louis van Gaal as manager of United in the summer of 2016, not long after the two men had that lunch. Senior figures at Old Trafford and some players agreed.

In the end, Jose Mourinho’s track record of winning trophies ensured he got the vote and the job. And who can say that Pochettino would have left Tottenham anyway?

But on Saturday the Argentine takes his team to Old Trafford at an interesting stage of his career. Some believe that in finishing second in the Premier League behind Chelsea last season, he hit a glass ceiling. 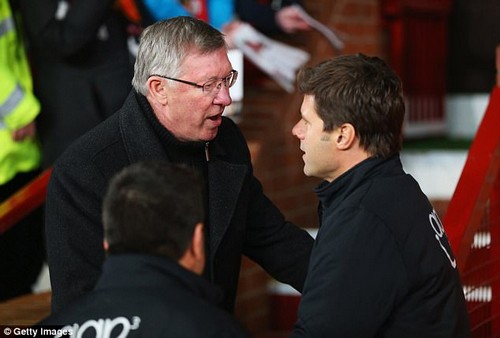 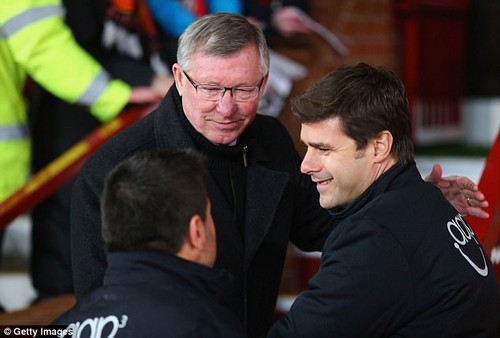 In his fascinating book, Pochettino jokes that Crystal Palace pay players more than Tottenham. As the north London club wait to move into their new stadium, the wage structure remains a very real issue.

Yet Spurs continue to surge forwards under the South American’s expert command. Four goals against Liverpool last Sunday laid down yet another marker and it is not stretching things to say Pochettino will arrive in the North West with a side who play the way United teams used to play.

Expansive, energetic and athletic, a blip against West Ham in the cup in midweek should not interrupt their swagger.While Mourinho moves United forwards in his own inimitably pragmatic style, Pochettino’s football has smoother edges. If he were to win for the first time at Old Trafford, it would feel telling. In more ways than one. 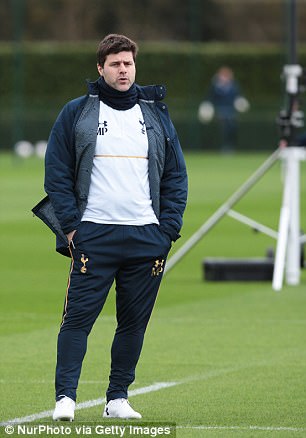 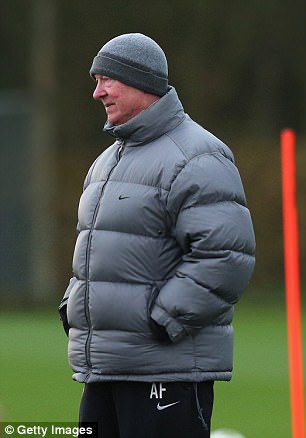 Pochettino, similar to Ferguson, enjoys being on the training pitch with his players

Nobody really knows – least of all people at Tottenham – why Pochettino has written a book at this stage of his career. Charting the period from the end of the 2015-16 campaign to the end of last season, it is candid and revealing. Maybe, at times, it gives too much away.

The book, written in conjunction with Spanish football journalist Guillem Balague, reveals Pochettino to be a man of great depth, an obsessive with many idiosyncrasies. If he was not quite so successful, we may even consider him eccentric.

For example, Pochettino chooses the exact laundry detergent used to wash the first-team kit. He thinks the smell is important. 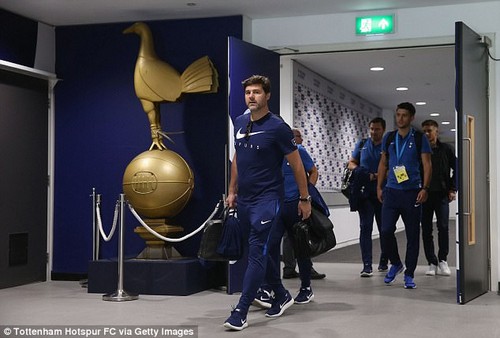 On his desk is a tray of lemons because he has read that they absorb negative energy.

Every day he lets his car engine run for 10 minutes before getting in, while occasionally he makes his players listen to a Robbie Williams song called Love My Life. When some of them sing along to it, he doesn’t know whether they are taking the mickey out of him or not. He doesn’t care.

But above all this book, this window into Pochettino’s heart, mind and soul, shows him to be desperate in his intention to take Tottenham to the top of the English game.

Pochettino has a deep admiration not only for Ferguson but for current adversaries Mourinho, Pep Guardiola and Arsene Wenger. 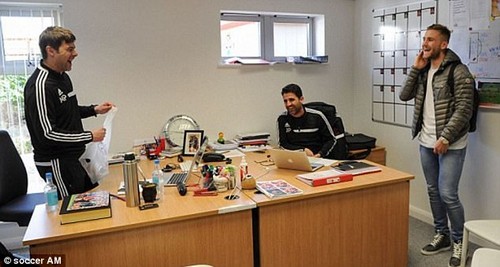 It makes his recent verbal jousting with Manchester City manager Guardiola intriguing. The men were neighbours once in Barcelona and faced off in derbies while Pochettino was coach of Espanyol. They like each other and have mutual friends such as City coach Mikel Arteta.

Meanwhile, Pochettino and Mourinho occasionally text and call each other over the course of a season. ‘We have always had a good relationship,’ Pochettino writes in the book, beneath a picture of the pair.

But Pochettino’s diaries of last season show him to be a manager fed up with finishing anywhere but first. In different ways and to differing degrees, he feels he owes something to these men – these rivals – but believes it is now time to beat them. ‘We have to perform really well to be at their level,’ he writes. ‘But we can do it. Finishing fifth (at Spurs) used to be fine. Now we are trying to create the standards present at the big clubs.’ 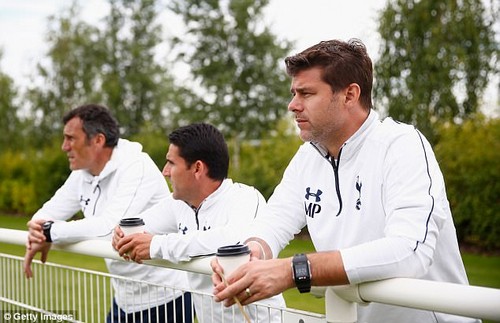 Pochettino states Tottenham are no longer a selling club. That said, he lost Kyle Walker to City in the summer and believes Mourinho wanted his central midfielder-cum-defender Eric Dier the previous year.

Details of the Spurs boss watching Mourinho and Dier talking in the tunnel after United beat Spurs at Old Trafford last December have made headlines through the serialisation of the book in last weekend’s Mail on Sunday.

We can expect the issue to resurface when both managers give pre-match press briefings on Friday. Pochettino has already called out Guardiola regarding him labelling Spurs ‘the Harry Kane team’ and now a shot has been fired across Mourinho’s bows, too.

Maybe this represents a shift in approach from the Argentine. He explains in his diary that he understands the importance of what he says in public, but has not previously wished to tweak the tiger’s tail, especially if the tiger is Portuguese. 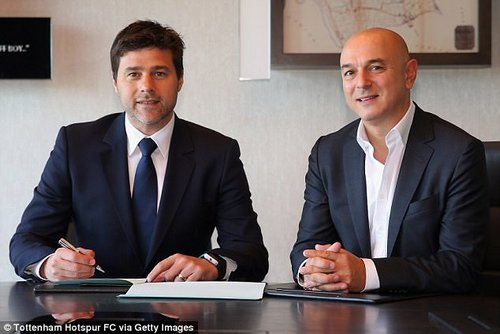 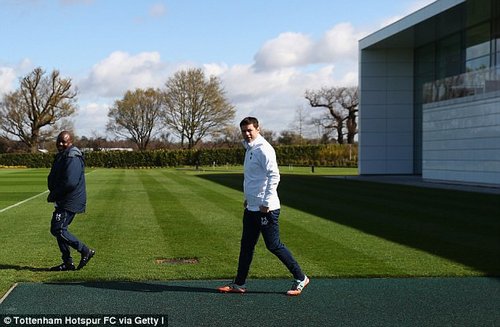 ‘English football is in thrall to the cult of the personality,’ he writes. ‘The sport is transformed into stories about individuals. The very best at controlling the public message is Jose Mourinho.

‘(It is not good) to fire up the beast that rages inside Jose.’

At their lunch, Ferguson told Pochettino that any match begins in the press conference and that you must always win it. Pochettino is not sure he agrees but he knows that Mourinho thinks the way of the great knight of Old Trafford.

So, maybe what we are witnessing this season is a manager taking the next step in positioning himself and his club where they need to be – namely, squarely in the face of their rivals.

Certainly, Pochettino is a small-details coach and will not tolerate players who do not share his obsessions. Last season he chose not to pick a player after seeing him choose a heavy meal – a plate of lasagne – an hour before a training session, while he has not forgotten the day midfielder Georges-Kevin N’Koudou turned up on his first day in a fancy car.

‘He has to show his value and we told him,’ Pochettino recalled. 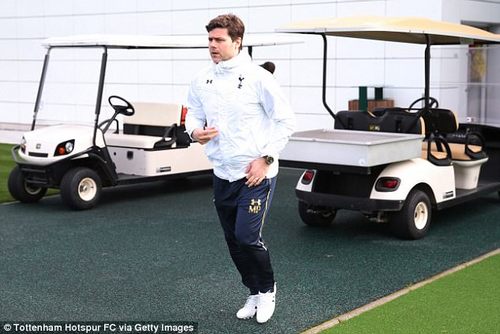 Banned by himself from the home dressing room at the training ground, he will nevertheless join in the odd drill on the field. He does not encourage players to use a psychologist because he believes that is his job.

For example, on hearing a supporter in Melbourne in pre-season 2016 tell him how proud he was of the way Tottenham’s players had conducted themselves during the 2-2 draw at Chelsea that had handed the league title to Leicester, he invited him to address the squad the next day.

Pochettino’s book reveals a man of contradictions. But name a top-level football manager who isn’t one of those.

He deliberately does not celebrate goals on the touchline as he believes it transmits the wrong message to his players. For the same reason, he tries not to look too despondent if things are going wrong. If he does either, his wife Karina will point it out later.

Conversely, he encourages his players to choreograph their own celebrations because he feels it brings them closer.

And underpinning everything, of course, is hard work. A Pochettino creed. A Ferguson creed. ‘Ferguson used to tell his players that working hard is a talent,’ he said. ‘To me, if a player doesn’t work hard for the team he wont play. Nothing happens by chance.’ 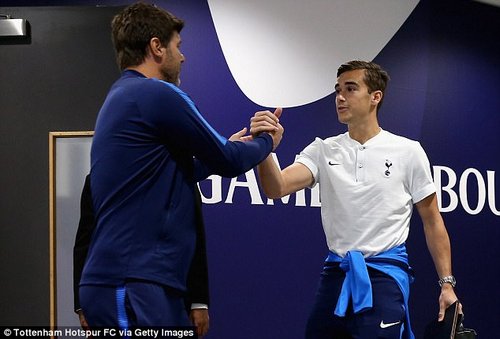 Ferguson once marked a heavy defeat by Manchester City by taking to his bed for the weekend. ‘I pulled the covers over my head,’ he later revealed.

Last weekend, Ronald Koeman followed Everton’s home smashing by Arsenal by going to Manchester’s most high-profile restaurant.There are no rules about what is right or wrong but Pochettino belongs in the former category.

Defeat by West Ham on Wednesday will still be hurting him.

The Spurs boss doesn’t believe in taking players to task individually in front of their team-mates. He does not even insist they speak English. ‘I am not a policeman,’ he writes in his book. But he can lose his temper. At half-time of last season’s Champions League defeat at Wembley by Monaco, for example, he punched a TV in the dressing room and almost broke it. 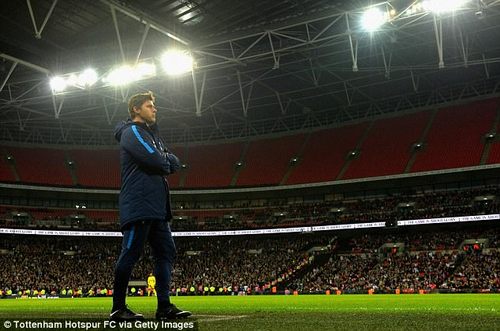 He was left visibly disappointed, though, as Spurs lost 3-2 to West Ham in the Carabao Cup 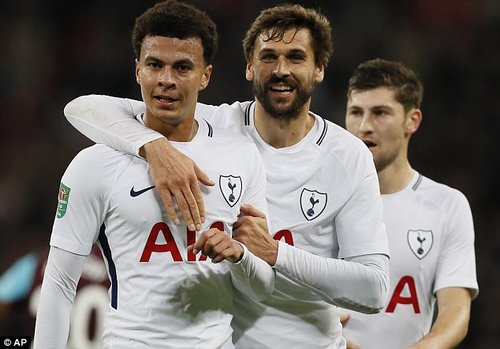 Pochettino can never understand why players do not hurt as much as he does. He put himself through a summer of torture after a 5-1 defeat at Newcastle on the last day of the 2015-16 season that allowed Arsenal to take the runners-up spot behind Leicester.

‘How can anybody think finishing third is the same as finishing second?’ he asks, rhetorically.

Pochettino’s book reveals him to be an obsessive watcher of his players. His staff video them as they enter and leave the training pitch and he wonders why they look happier on the way off.

If he passes one in a corridor, he will mention a point from the most recent team meeting in case they have forgotten it. He doesn’t overload his players with information, however. Discussions about the opposition before a game sometimes last only five minutes. Shades of Brian Clough and Bob Paisley, there. 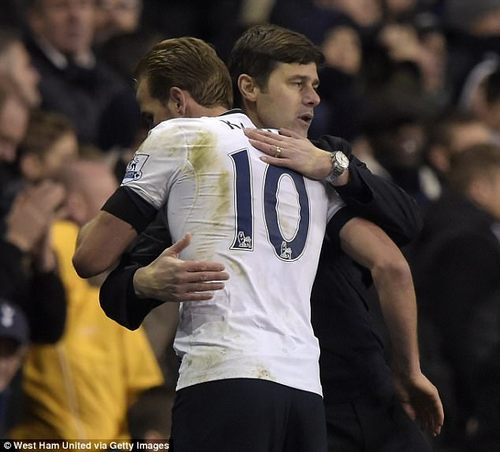 But when it comes to the moods, attitudes and mannerisms of his players, Pochettino endeavours to miss nothing.

His favourite place to sit is on a sofa in the canteen at the training ground. Usually he is there by 9am but if things have gone badly on the field it may be 8am. ‘This is our first conversation or contact of the day,’ he writes. ‘I need to see what state of mind they are in. I keep an eye on their expressions.’

If this all makes the manager of Tottenham sound like a bit of a control freak, then maybe he is.

He obsesses about his weight, for example, and admits sometimes, at the training ground, his wife has to make an appointment to see him. When referees visit – as they usually do – before the start of the season, he has videos prepared. We can presume they are not highlight reels of their correct decisions. 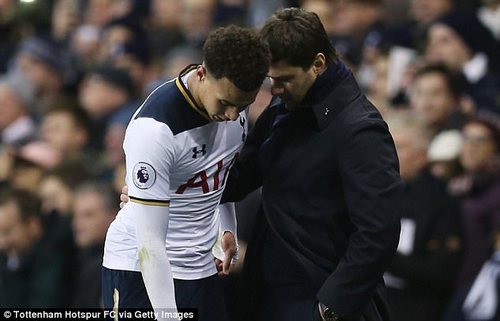 Does this book make him seem arrogant? That is something he worried about as he wrote it. But no, it doesn’t, on the whole.

He has an emotional connection to his players and that is not something that happened by accident.

He talks about the day he thought his time at Tottenham was coming to an end, only three months into his first season. Losing 1-0 at Aston Villa, Pochettino turned to his bench and warned them: ‘Pack your bags, we are going home.’

In the end, two late goals saved Tottenham and their manager. Their goalscorer in the 90th minute? Harry Kane.

‘The revolution had begun,’ writes Pochettino in the book.

At Old Trafford, the wheel may take yet another significant turn.

Wigan and Luton promoted as Macclesfield return to Football League