Van Avermaet’s grip on the yellow jersey is tightening too – he’s still in the lead group. Of the other riders up front, Calmejane is just over 5min behind on GC, as is Serge Pauwels.

There’s a chance for the 14-man breakaway here – the lead is over seven minutes now.

Froome is safely back in the peloton, having bagged a wheel from Jonathan Castroviejo.

Why always him? If one rider was to puncture on this gravel section – and it does seem to be only one – Chris Froome would be your first guess.

? – 84 km
Puncture for @chrisfroome, who is now catching up with the bunch all alone in the dust ?
Crevaison pour @chrisfroome qui remonte seul dans la poussière ?#TDF2018 pic.twitter.com/KSMWM7DQIM

Team Sky and the peloton hit the gravel path now.

On the way up, by the by, the leaders were jumped by a mountain biker: 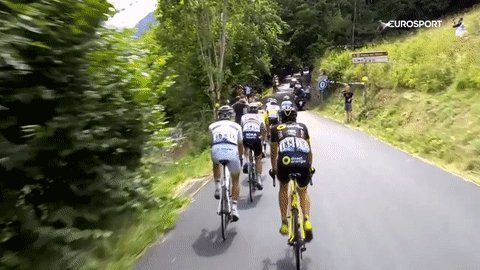 Nothing to see here … just a BMX jumping over the peloton ? #TDF2018 pic.twitter.com/sNqaomztly

Also well worth mentioning is the fact that the top of this mountain is home to the national museum to the French Resistance. More than 100 resistance fighters were killed by the Wehrmacht on these hills during a battle in the second world war.

The uphill section of the gravel is a little more lumpy but I’ve seen cycle paths in the UK that are much, much worse. (Though that may say more about the UK’s cycle paths than it does about the road at the top of the Glières.)

They hit the gravel section, with Alaphilippe briefly powering off on his own. No one seems to discomfited by the surface, which isn’t the potholed farm track that you might imagine.

Gaudu attacks the summit, with Alaphilippe following. The older man nips past and takes full points.

One kilometre to the finish for the break, which is a big bunch once more. Gaudu leads the way.

Pauwels, Gaudu, Molard, Taaramae and Van Avermaet are the five remaining members up front. They have over five minutes on the peloton but only a few seconds on Gesink and co.

The lead group is down to five men and Greg van Avermaet is still there. Gilbert has gone, as has Moinard.

Robert Gesink of Lotto-Jumbo is bringing the second group on the road back to the leaders. Meanwhile, Vincenzo Nibali drops back to his team car for something or other then blasts past the backmarkers with enviable ease.

Five kilometres to the summit for the peloton. No fireworks yet.

Glières approaching. This makes me feel a little faint:

The steepest climb of this Tour is about to begin. Deadly black from the bottom to the top. Unfortunately, so far from the finish… #TDF2018 pic.twitter.com/bwVhDABnR6

That octet have just over four minutes on the Team Sky-led peloton – which isn’t really much of a margin given the terrain to come.

The 21-man break is no more – there’s now eight riders off in a group of their own: Gilbert, Pauwels, Moinard, Molard, Taaramae, Gaudu, Postlberger … and Greg van Avermaet, who may lose the yellow jersey today but a) is doing his damnedest to hang onto it and b) may get himself the combativity numbers for tomorrow instead.

So, one down, three to go. It’s a long steady decent to the foot of the Montée du plateau des Glières, around 20km away.

@John_Ashdown re: the loose section – having (just about) cycled it last week, and walked over a cobbled section of stage 9 I can confirm if they can get over the cobbles, the gravel will be a walk in the park!

Molard and Taaramae duke it out with 400m to go as their former (and future) breakaway colleagues close in. Molard thrashes his way to the top to take maximum points.

I assumed there were too many riders in the break to play “What is the breakaway?” today, but apparently Paul Griffin is up for the challenge: “You’ll be well aware of course that van Avermaet, Gilbert, Sagan, Calmejane, Pauwels, Impey, Moinard, Martin, Alaphilippe, Gallopin, Slagter, Vichot, Gesink, Molard, Taaramae, Degand, Gaudu, Bauer, Postlberger and Gesbert were the names of the Fimbles in the disastrous Hungarian original children’s series, which was too confusing, and also drew too much on nihilism, free love and existential terror for its pre-school audience. Episode 7: Gaudu gives in to Hate, was particularly hard to stomach.”

It’s all got a little bit broken up at the front as the summit approaches. Molard and Taaramae jump away and open up a 45sec gap.

“Can someone explain why Van Avermaet has made an effort to get in the break?” wonders Luke Harrison. “He is not interested in Sprint points and can’t think he is going to extend his lead today. Surely his only chance of holding on to Yellow would be to just have a storming day trying to hang on to the leaders and limit his loses. I seem to remember Cancellara surprising everyone a few years back by holding on to Yellow in to the mountains for a bit longer than expected. Or is it just that he knows he is doomed and wants to show off the yellow jersey as long as he can?”

Team Sky – quelle surprise – are on the front of the peloton, controlling the pace and allowing the break close to three minutes. Up at the front, Calmejane leaps away in an attempt to take the mountain points, but Slagter reels him in.

As someone who cracks on the gentle hills of north London (yes, like anyone else who enjoys the Tour and commutes on two wheels, the slopes over the past few days or so have become “the Col de Co-op” and “the Mur de Caledonian Road”) these gradients are wince-inducing. The pace and the percentage are not enough to shed Peter Sagan from the lead group though, but Marcel Kittel is already having a tough time at the back of the peloton.

“Any word on whether the riders have gravel bikes to swap onto or have made any other accommodations for the loose sections?” wonders Craig Fawcett. No, I think it’s just “cling on and hope for the best”. The gravel section is fairly flat – there’s some interesting info on it all here and here.

The breakaway hit the foot of the Col de la Croix Fry, 11km at an average of 7% though there are some flat sections.

After that slightly chaotic start we finally have 21 riders in the fully established break, including the yellow jersey Greg van Avermaet. Deep breath:

True that the women didn’t ride all of it it as part of La Course but the 13 women of @desELLESauVELO rode the whole stage yesterday (and are riding the entire Tour a day before the men)!

Julian Alaphilippe, who seems in the mood to make mischief today, crests the Bluffy first to take the solitary mountain point.

The green jersey, Peter Sagan, is determined to get himself into the first break of the day – sprint points are available 10km after the summit of Bluffy, which he’s likely eyeing.

@John_Ashdown Lots of people looking forward to this stage as it was used for the Etape last week. Glieres really was a tough climb so it’ll be interesting to see how the pro’s do. Disappointing that the women didn’t ride the whole thing earlier though.

With the first climb of the day, the pleasantly-named Col de Bluffy, just 19km into the stage there’s a panic at the front of the peloton as about half the pack try and get into the breakaway. Nothing has fully formed yet, though.

The 2018 edition of La Course has already been over the final hills of this stage. It was a superb race, won in the final metres by Annemiek van Vleuten.

Hello all and welcome to live coverage of stage 10 of the 2018 edition of the Tour de France. And what a stage it should be – we’re into the mountains!

The Col de Romme and Col de la Colombiere (both category one climbs) await in the final 40km but before then we’ve got the Col de la Croix Fry and the hideously steep HC climb of Montée du plateau des Glières, which includes gravel roads near the summit.

Romelu Lukaku amongst Man Utd stars checking in at Lowry