“Our game is under attack,” Fedora said on Wednesday at the ACC’s preseason media day in Greensboro. “I fear that the game will get pushed so far to one extreme that you won’t recognize the game 10 years from now. And I do believe that if it gets to that point, that our country goes down, too.”

Fedora illustrated the point by recalling a conversation he’d had several years ago with a three-star Army general who attributed the success of the US military to football.

“I had a question for him: What is it that makes our country, our military, superior to every other military in the world?” Fedora said. “He was like: ‘That’s easy, we’re the only football-playing nation in the world. And most of our troops have played the game at some point in their life at some level and the lessons that they learned from that game makes us who we are.’” 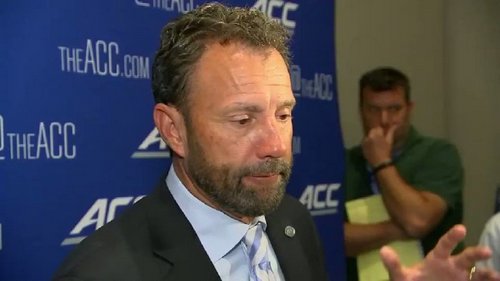 And here’s Larry describing his meeting with a General who attributed US military superiority to playing football: pic.twitter.com/oZnAzc7QB4

Fedora also questioned the scientific evidence drawing a connection between football and chronic traumatic encephalopathy (CTE), the progressive degenerative brain disease that’s been linked to repeated blows to the head, saying that the game “is safer than it’s ever been”.

“Are there still injuries? Yeah. It’s a violent sport,” Fedora said. “You’ve got big, fast, strong guys running into each other. Something is going to give. But there are risks involved in the game, and everybody that plays the game understands those risks. It’s not like they’re going into it not knowing that something could happen. And so they have to – personally have to weigh those risks versus the rewards.”

In 2016, an NFL official acknowledged a link between football and CTE for the first time when Jeff Miller, the league’s senior vice-president for health and safety, spoke about the connection at a discussion with the House committee on Energy and Commerce.

“When I started playing the game, it was all about the head,” Fedora said “You were going to stick your head into everything. And as we’ve learned and we understand the dangers of what’s going on in the game of football, you slowly have taken the head out of the game. And so all the drills that you teach, all the tackling, all the things you do, you do it with the head out of the game, to keep the head away from the impacts.

“Also, back when I played, you were three practices a day during fall camp. I mean, so all of those changes … you had one cup of water at practice. We’ve learned and evolved so much about hydration and you don’t need to take salt tablets and all those different things that you did in the past.”

After his formal availability Fedora returned to clarify his points regarding the link between football and CTE, though his follow-up remarks were anything but a backtrack.

“I’m not sure that anything is proven that football itself causes CTE,” he said. “My understanding is repeated blows to the head cause it, so I’m assuming that every sport, football included, could be a problem with that if you’ve got any kind of contact. That doesn’t diminish the fact that the game is still safer than it’s every been because we continue to tweak the game to try to make it safer for four players.”

Celtic left back Tierney living the dream after new deal

Ireland face lottery of the play-off after win over Wales