The United States have been eliminated from the World Cup, a shocking loss at Trinidad ending the Americans’ streak of seven straight appearances at football’s showcase.

Surprise victories for both Honduras and Panama ensured that Bruce Arena’s side slipped from the third automatic qualification spot to fifth place out of six.

Twenty-eight years after a stunning victory at Trinidad put the Americans back in the World Cup after a four-decade absence, their chances for next year’s tournament in Russia ended on this island nation off the coast of Venezuela. 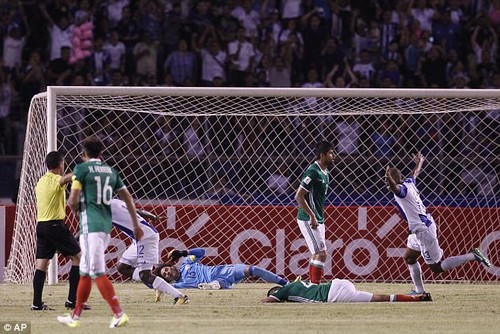 Trinidad and Tobago scored a pair of first-half goals, and the United States were eliminated with a 2-1 defeat Tuesday night – the first time missing the World Cup since 1986.

The US entered their final qualifier with a berth uncertain for the first time since 1989. Home losses to Mexico last November and Costa Rica left the Americans little margin for error.

But the defeat – coupled with Honduras’ comeback 3-2 win over Mexico and Panama’s 2-1 victory over Costa Rica on Ramon Torres’ 88th-minute goal – dropped the Americans from third place into fifth in the six-nation final round of the North and Central American and Caribbean region.