The imperious Vasiliy Lomachenko captured the World Boxing Association lightweight title from Jorge Linares in a wildly entertaining scrap on a rainy Saturday night in New York, becoming a world champion in a third weight division in the remarkable and unprecedented span of a dozen professional fights.

It’s so often looked easy for the sport’s most technically proficient fighter but Saturday’s outing was anything but. The two-time Olympic gold medalist showed he was indeed human against the bigger, longer champion before him, coming off the floor at the end of the sixth round and roaring back for a devastating body-shot knockout in the 10th before a rollicking crowd of 10,429 in the big room at Madison Square Garden, bolstering an already compelling claim for boxing’s pound-for-pound throne.

Now the 30-year-old southpaw is a champion in three weight classes in fewer bouts than it took division-spanning icons like Oscar De La Hoya (who needed 23 fights), Floyd Mayweather Jr (34) and Manny Pacquiao (41). The all-time mark in boxing’s century-spanning annals had been held by Australia’s Jeff Fenech, who won titles at bantamweight, junior featherweight and featherweight inside 20 fights between 1984 and 1988. 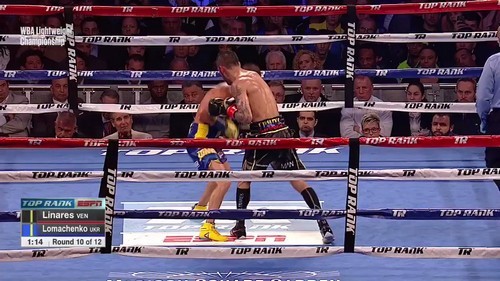 The TKO that made Lomachenko the new WBA lightweight world champion. ?? #LinaresLoma pic.twitter.com/xXSt22Ni4g

Linares (44-4, 27 KOs), three inches taller and a reported 10lbs heavier after rehydrating, appeared to loom even larger over Lomachenko at the opening bell than at Friday’s weigh-in and for once the Ukrainian wasn’t clearly the faster fighter in the ring. The 32-year-old born in Venezuela and based in Las Vegas, a top operator and three-division beltholder far more worthy than the oddsmakers’ 10-1 price against him, took advantage of his opponent’s cautious opening, working in the pocket and scoring in spots as the calculating Lomachenko carefully assessed the challenge before him.

Lomachenko needed only two rounds to make the right adjustments and began using feints to move Linares out of position, making him pay with shots from unexpected angles. That left Linares already starting to look disspirited while Lomachenko was only getting started and the crafty veteran, immediately devoid of a plan B, found himself relying on a series of rabbit punches to stem Lomachenko’s ominous tide in the fourth, drawing a warning from the referee and the animated ire of the Ukrianian’s corner.

By the fifth Lomachenko appeared in full command, controlling the distance and dictating the action with the same impeccable, balletic footwork that’s made one elite challenger after another quit on their stools rather than absorb another minute of a punishment that’s proven to be as taxing mentally as physically. He closed the round with an educated four-punch combination, sending the partisan crowd into hysterics as the bell sounded.

The one-way traffic, the sort of creative symphony of jabs, hooks and uppercuts that evoke the bullet-time origin of his initial nickname (‘The Matrix’, since usurped by the equally evocative ‘Hi-Tech’), continued into the sixth but just when it seemed the outcome was a formality, Linares found purchase against the run of play with a compact right hand flush on the jaw that dumped Lomachenko onto the seat of his trunks near the end of the frame. The fight was on.

“I relaxed a little bit,” Lomachenko said afterward through a translator of the first knockdown of his career. “He used his speed and he was throwing a lot of counterpunches, but I thought I already did what I what I needed to do. I was wrong and he caught me.”

Linares came on strong when defeat looked imminent, sending Lomachenko to the canvas for the first time in his career in the sixth round. Photograph: Al Bello/Getty Images

The high-speed chess match continued but now it was Linares who appeared to be winning exchanges with power over precision and he did enough to nick the seventh on dedicated body work. But Lomachenko rallied back in the eighth with pinpoint combinations, including one in the closing minute that opened a cut over the Venezuelan’s left eye.

Every time it seemed Lomachenko had solved the puzzle, Linares managed to fire back, including a cracking flurry in the ninth that stopped the stalking Ukrainian in his tracks. But he finally succumbed at 2:08 of the 10th round after Lomachenko bounced a series of punches off Linares’s head before finishing the proceedings with a beautifully timed left hook to the liver almost imperceptible to the naked eye that dropped the champion to the canvas, pumping his right fist in celebration as he strode clear of the wreckage toward a neutral corner. Linares managed to make it to his feet to narrowly beat the 10-count, but referee Michael Ortega had seen enough and waved it off, resigned to an ennobling defeat, his first in five years, that result notwithstanding will surely improve his stock.

“But I was looking for that punch and I was very happy I found it.”

It’s a good thing he did. One of the ringside judges had Lomachenko trailing 86-84 at the time of the stoppage, another had him ahead by the same score while the third had it 85-all (as did the Guardian).

Now Lomachenko is expected to surrender his junior lightweight title and hold steady at 135lbs – a smart move at least for the short term given his uncharacteristic struggles with Linares’s size – and is slated to return to headline a 25 August card at the Forum in Inglewood, California. One likely match would be a lightweight title unification fight against the veteran Ray Beltrán, a Top Rank stablemate, longtime Pacquiao sparring partner and general hard-luck contender who in February finally broke through to capture the vacant WBO strap in his 19th year as a professional.

Lomachenko (11-1, 9 KOs), who turned professional after an extraordinary amateur career where he won 396 of 397 fights and Olympic golds at the Beijing and London Games in different weight classes, had already matched the all-time record for fewest bouts to win a world championship when he outclassed Gary Russell Jr for a featherweight title in his third paying fight.

He’d then climbed to junior lightweight and stopped Rocky Martinez in his seventh outing, setting another record for fewest fights to collect a world title in a second weight class. All four of the lightweight challengers he had faced entering Saturday’s fight – elite fighters like Nicholas Walters, Jason Sosa, Miguel Marriaga and Guillermo Rigondeaux – quit between rounds rather than endure further humiliation.

Lomachenko’s professional ledger may be brief but unlike countless professional neophytes holds up to close inspection: the combined record of his 12 opponents, a fraternity that includes no less than eight current or former world champions, is 396-34-13. That includes the split-decision defeat in his second fight to Mexico’s Orlando Salido, a multiple-time world champion across two divisions and one of the sport’s all-time gamers.

But Lomachenko is hopeful that Saturday’s rare glimpse of vulnerability will entice boxing’s bigger names into the ring who otherwise might have avoided the formidable challenge of taking on the sport’s best fighter regardless of weight. At least one of them, the unbeaten super lightweight champion Mikey Garcia, has articulated a willingness to come down to 135lbs for the right opportunity and the mere mention of a summit meeting between the pair will no doubt leave fight fans drooling.

“That’s what I told to (Top Rank vice president Carl Moretti) right after in the ring: right now it’s going to be much easier for you to get opponents for me because they all see I am also a human being,” he said. “I just made an easier job for my promoter.”

The two-time Olympian, who earned bronze at the London Games before controversially missing the podium in Rio, won all eight rounds on all three judges’ cards over his overmatched Basque opponent.

Already a proven draw in the Garden’s smaller theater, Conlan wore a crowd-pleasing New York Knicks jersey into the ring and delivered on his promise, albeit over limited opposition, scoring a knockdown in the fourth that ignited a still-arriving crowd that included broad pockets of Irish fans.

“It’s always going to be hard to look good against a guy who is backing up,” Conlan said. “But I’m happy because I was composed and working on things I need to work on. I’ve only had seven pro fights, so this was a good learning experience.”