An improbable goal-scorer lifted an improbable champion into the Stanley Cup finals. Ryan Reaves’ tie-breaking goal in the second period on Sunday helped the Vegas Golden Knights to edge the Winnipeg Jets 2-1, clinching the Western Conference title for Vegas in their first season of existence.

A roster consisting almost entirely of other teams’ castoffs will meet either Tampa Bay or Washington for the Stanley Cup. The Lightning lead the Eastern Conference championship series 3-2, with Game 6 scheduled for Monday night in Washington.

Reaves’ first goal of this postseason, and just his second career playoff goal, came early in the second period. Luca Sbisa took a wrister from the point that deflected off one stick before Reaves got his blade on it, tipping it off the crossbar and over the goal line. The Golden Knights defended the lead fiercely from that point, getting 31 saves from Marc-Andre Fleury and keeping the Jets from overrunning their defensive zone, even when Winnipeg pulled goalie Connor Hellebuyck for a sixth skater in the last two minutes. 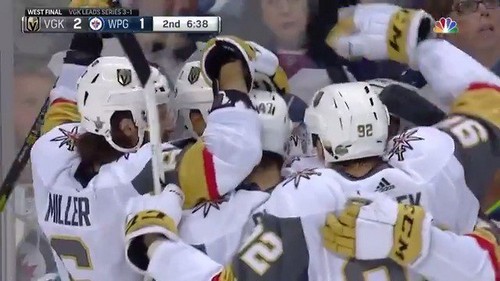 as a Golden Knight pic.twitter.com/yMgGsXE3CF

Vegas became the first expansion team to reach the Cup finals since the St Louis Blues, who played in a division of nothing but expansion teams after the NHL grew from six to 12 teams prior to the 1967-68 season.

As they have done throughout the series, the Golden Knights started fast. A failed clearance by Jets defenseman Josh Morrissey found the stick of Alex Tuch in the high slot. He wheeled and wired a wrister past Hellebuyck at 5:11 of the first period for his sixth playoff goal.  Vegas had a 15-3 advantage in shot attempts in the first nine minutes, but Winnipeg finally found some traction as its sellout crowd roared to life.

Morrissey atoned for his mistake by tying the game at 17:14 of the first with his first playoff goal. Bryan Little’s clean faceoff win found its way to Morrissey for a one-timer over Fleury’s glove.