The NRL has been widely praised for its response to comments posted below a photo it shared of opponents – and partners – Vanessa Foliaki and Karina Brown sharing a kiss after their State of Origin game on Friday night.

Brown is the captain of the Queensland women’s State of Origin side, while Foliaki plays as a lock for 2018’s winners New South Wales. The two have been together since 2014 and were snapped kissing after the inaugural women’s game at North Sydney Oval. 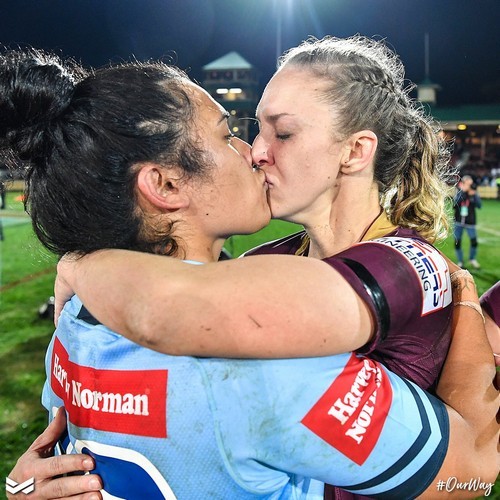 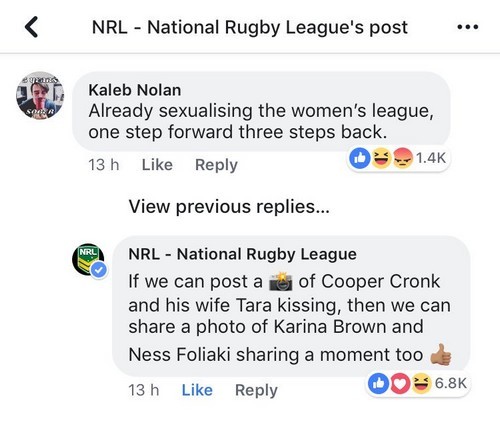 Another favourite comment from the @NRL owning the comments @leachitup pic.twitter.com/LpqwrlTkdk

As of Sunday, the NRL’s post had attracted over 25,000 likes on Facebook, including 6,200 “loves”. It was also retweeted by the NRL on Twitter. However, some were unhappy with the photo, with one user, “Matt”, writing that the women should “keep that crap to the dressing shed or at home. We don’t care if you are partners … just keep it off the field and let your football do the talking.”

The NRL also replied to a post by “Kaleb” which said: “Already sexualising the women’s league, one step forward three steps back.” The NRL’s Facebook account responded: “If we can post a picture emoji of Cooper Cronk and his wife Tara kissing, then we can share a photo of Karina Brown and Ness Foliaki sharing a moment too thumbs up emoji.” Again, public reaction to the post was overwhelmingly positive, with over 9,000 likes.

Amongst other initiatives, the NRL was acknowledged for Macklemore’s performance of LGBTI anthem Same Love at the NRL grand final during Australia’s postal survey on marriage equality, while the code also had a float in the 2018 Mardi Gras.

On Friday night, rugby league’s women were able to play under the banner of “State of Origin” for the first time in nearly four decades. The women have held a representative match between Queensland and New South Wales each year, but it has previously gone by the name “Interstate Challenge”.

Some 6,824 fans turned on a cold winter’s night to watch the Blues win the inaugural “Origin” game 16-10. Controversy, however, surrounds continued poor remuneration and conditions for women’s sport, after the revelation that Blues captain Maddie Studdon had to resign from her job as a stevedore to represent her state.

Ben Cross just revealed that Blues skipper Maddie Studdon lost her job this week. She wasn’t able to get time off work at Port Botany wharf. That’s the ultimate sacrifice and shows how much footy means to her #OurWay