So what do we know about Van Uytvanck? The 24-year-old has been beyond the second round of a grand slam only once in 16 previous attempts, at the French Open in 2015 when she made the quarter-finals. Kim Clijsters is asked on the BBC commentary whether she’s surprised by her fellow Belgian’s performance. “She’s playing her best tennis right now and when she does she’s capable of beating anybody,” says Clijsters. “She just hasn’t been able to do it consistently on tour.” 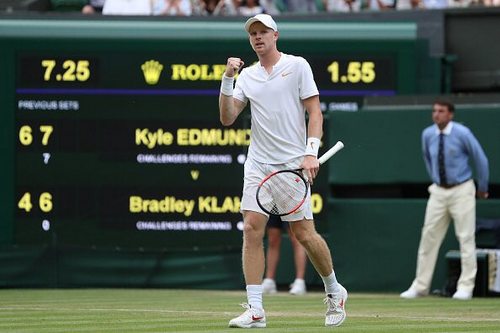 Solid day in the office… bring on Saturday and let’s make it another double… up the @England ??????? pic.twitter.com/12ao8o19By

Wow. Van Uytvanck doesn’t even need to wait for her service game to seal the set. The world No 47 breaks when the world No 3 makes a mess of chasing down a loose drop shot, and she deservedly forces a deciding set. It’s Muguruza 7-5, 2-6 Van Uytvanck.

Muguruza has a match on her hands. Van Uytvanck breaks for 4-2. Muguruza has the chance to bite back in the following game at 30-40 but balloons long on break point. Deuce. Advantage Van Uytvanck. Game Van Uytvanck. The Belgian gets out of jail and leads 5-2 in the second set.

Muguruza certainly isn’t having everything her own way on No 2. Having broken early in the second set, she’s broken back. Van Uytvanck then holds to lead 3-2.

At least Fabio Fognini’s done the business, putting friendship aside for a 6-3, 6-4, 6-1 win over Simone Bolelli.

Meanwhile in news that does my chances of getting dinner any time soon absolutely no good, Alex Zverev has lost the second set 7-5 in the battle of the young guns against Taylor Fritz. Zverev, remember, won the first 6-4.

How the draws look after today’s results:

The shadows are lengthening on the No 2 Court, where Muguruza has recovered from the disappointment of failing to serve out the first set. The Spaniard breaks Van Uytvanck – the third consecutive break – to ensure she’ll have another chance to get the set on the board. 15-0, 30-0, 40-0, game and set Muguruza 7-5. 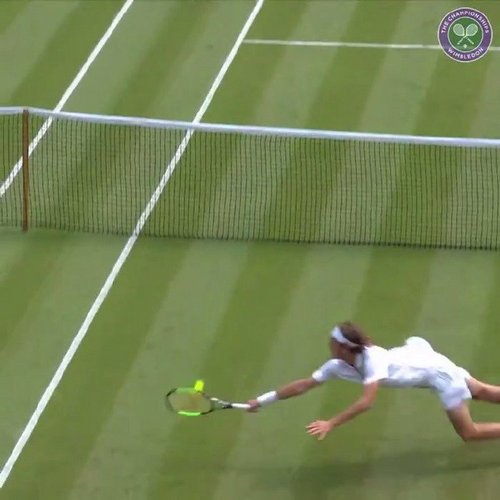 How did you get to that, @StefTsitsipas? ?

The @HSBC_Sport Play of the Day needs your undivided attention… pic.twitter.com/WKP2vFiimL

Muguruza could be forgiven for treading rather cautiously on the No 2 court given the way the seeds have been tumbling this week, but the defending champion is moving with authority, serving for the opening set at 5-4. And there’s the commentator’s curse. Muguruza is broken and they’re back on serve at 5-5.

A first-ever third round appearance ?@kyle8edmund advances at #Wimbledon thanks to a 6-4, 7-6(0), 6-2 victory over Bradley Klahn pic.twitter.com/iBNL85cvl5

First, though, there’s the off-court interview:

Really happy to get the win. Second time I’ve played on Centre Court and first time I’ve got the win. I thought the match … I broke in the first game and that helped with the nerves, though it was tentative in the second set. After the tie-break I really relaxed into it.

Klahn has checked out. 0-15. 0-30. 0-40. Edmund, on the stretch, nets a backhand return on the first match point. But he nails a backhand return on the second, which sets up the point for him, and he finishes with a forehand for symmetry’s sake. Edmund advances to a Saturday blockbuster with Novak Djokovic, so perhaps he’ll be heading straight to the referees’ office to request a 1pm start so he can squeeze in a bit of England v Sweden afterwards.

Edmund breaks Klahn for the first time since the opening game of the match and he’s in complete control, 6-4, 7-6 (0), 4-2. I feel a bit ungrateful saying this given Edmund is surely going to win, but I’m missing Andy Murray. This is all too business-like. Where’s the drama? Where’s the chattering and chuntering between points? Where’s the glares at the players’ box? Edmund backs up the break and Klahn must hold serve if he’s to continue his misery for any longer.

Strike Ostapenko v Flipkens from that list. The big-hitting 21-year-old has thwacked, whacked and cracked her way to a 6-1, 6-3 win over the 2013 semi-finalist.

Among the late starters on this fourth day: two grand slam champions and surely a future major winner. Garbine Muguruza, the defending champion here, is about to get going on the No 2 Court against Belgium’s Alison Van Uytvanck. Jelena Ostapenko, the 2017 French Open winner, leads another Belgian, Kirsten Flipkens, by a set to love on the No 3 Court. And Alex Zverev, the man who could be tennis’ king, has a break in the opening set against the American Taylor Fritz on No 1.

Neither Edmund nor Klahn have been able to secure a break in this second set, so it’ll be decided by a tie-break. Edmund ekes out a 3-0 lead. He affords himself a fist pump, as well he might. Edmund is at it again after the next point, having sprinted across the court and forced Klahn to play the extra shot, which the American inexplicably misses. 4-0. Make that 5-0. 6-0. 7-0. There’s the tie-break whitewash. Edmund is well on his way, 6-4, 7-6.

The importance of being Ernests. The enigma that is Gulbis is through to the third round. Having been taken to five sets by Britain’s Jay Clarke in the first round, the Latvian’s gone the distance again today, defeating the in-form Bosnian Damir Dzumhur 2-6, 6-4, 6-3, 1-6, 6-3. Dzumhur was seeded 27th here, and his departure means half of the men’s seeds are out.

That result means the Australians end the day with five players advancing and two going home. Through: Kyrgios, De Minaur, Ebden, Barty and Gavrilova. Out: Tomic and Stosur.

Kyrgios v Tomic in the third round was not meant to be. Kei Nishikori has come from a set down to defeat Tomic 2-6, 6-3, 7-6 (7), 7-5. It’s still been a relatively positive week for Tomic, who snuck into the draw as a lucky loser and leaves on much better terms than he did last year when he was fined a record $20,000 for feigning injury and saying he was “a little bored” during his first-round exit.

At 4-4 it’s getting towards the business end of the second set on Centre, so Edmund decides it may be time to strike. He has a break point on Klahn’s seve and then another. But Klahn stands firm. It’s Edmund 6-4, 4-5.

It’s all go for Delpo. The fifth seed completes the most straightforward of straight-sets wins, 6-4, 6-1, 6-2 over an ailing Feliciano Lopez.

It’s going with serve in the second set of Edmund v Klahn. This match hasn’t really sparked into life yet, but if Edmund wins I doubt he’ll care about that. The Brit is quietly going about his business on serve, and hasn’t faced a break point. Edmund leads 6-4, 2-2.

Youth has prevailed over experience on Court 18 though, with Karen Khachanov outlasting Marcos Baghdatis, a semi-finalist here 12 years ago, 7-5 in the fifth set. Khachanov had led by two sets to love.

One thought on “Wimbledon 2018: Muguruza, Zverev in action, Edmund wins, Konta and Cilic out – live!”