Sixteen years on, the image remains vivid in Adebayo Akinfenwa’s mind. As an 18-year-old black footballer in the Lithuanian port city of Klaipeda, he endured the most ghastly racist abuse.

In a 14-year career in England and Wales, Akinfenwa has since had his share of taunts. He is accustomed to being told his breasts are offside or being called a ‘Fat Eddie Murphy’.

He can handle that. Yet one particular incident in Lithuania remains distressing. He remembers the girl, no older than 12, who walked into a local supermarket, dressed from head to toe in dark Goth clothing. He remembers the scent coming off the perfume stand in the store. And he remembers her brief stare. 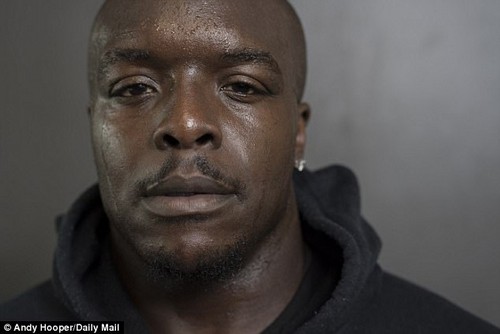 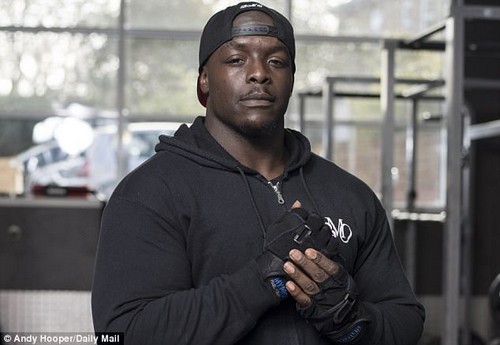 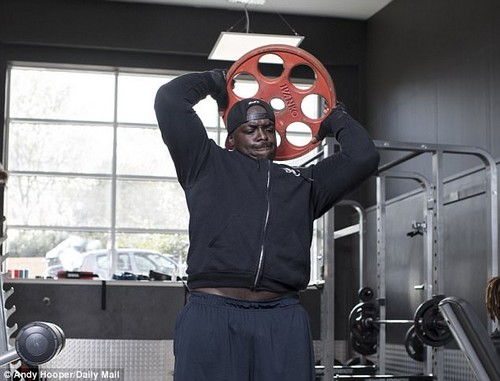 Akinfenwa, 35, still sticks to a daily routine that incorporates plenty of gym work with weights

‘She strolled up, stood there, and said, “White Power”,’ Akinfenwa says. ‘She looked right through me, waited a couple of seconds, then walked away.

‘The cashier looked straight through me – no reaction. Growing up in London, I was a big boy so nobody would disrespect me like that. Kids are a product of their environment. You look at that girl and think, “That is a shame. Whatever your parents have drummed into you, that is sad”.’

Akinfenwa has become one of English football’s most endearing characters. At 16½ stone, he is a hero for many young people who have known him as the FIFA video game’s strongest footballer.

One online poll pitted Akinfenwa against Lionel Messi and 78 per cent of users said they would prefer to play with the Wycombe striker than Barcelona’s icon. Yet he is also a fine striker within touching distance of 200 career goals, with 195 strikes in Lithuania, England and Wales.

‘The Beast nickname can be gimmicky,’ he admits. ‘I was asked to go in a banana suit once or eat as many doughnuts as possible. I would not do those things. I don’t eat doughnuts so why would I eat 20. I did Man v Food for Soccer AM and did chicken wings. That’s me because I eat chicken three times a day. I won’t blur my lines for clicks.’ 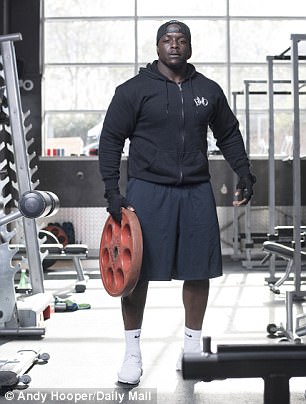 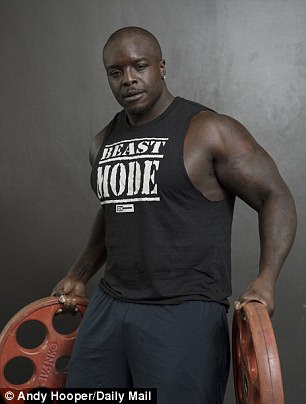 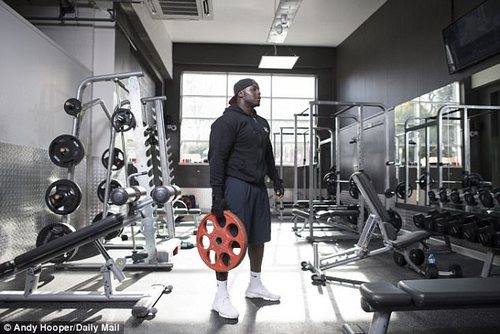 At 16½ stone, he is a hero for many young people who have known him as the FIFA video game’s strongest footballer

Now 35, Akinfenwa grew up in Islington, on the top floor of a tower block in a Mayville council estate. He developed a street-fighter mentality and learned his football by throwing down his schoolbags and racing off to play in the local cage.

Games were frenetic, sometimes 15 against 15, kids bashed into the sides, grazing their elbows and knees but picking themselves up to do it all over again. At home, he was taught love and discipline by a strict Nigerian Christian mum and a more laid-back Muslim father.

He had trials with Arsenal, Bolton and Leicester, among many more. He signed youth terms with Watford but was dropped before professional level. Then came Lithuanian side FK Atlantas.

‘My agent was married to a Lithuanian and the club president watched one of my Watford games. It was UEFA Cup football. I’d never heard of the place. I went by myself.’

The monkey chants came in his first pre-season match. In the second, it got worse. ‘Zigga, zigga, shoot the f*****g n****r’ rang out. One of his team-mates called him a negro. 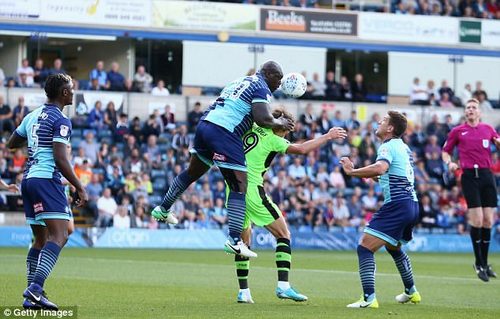 The striker had trials with Arsenal, Bolton and Leicester before he signed with Watford

‘Every time I got off the coach, it started. For the first half of the season, it was the home fans too. Then I started scoring goals and it stopped. Away, racial abuse became the norm. I look back and cry but I think, “You couldn’t break me”. If you have a love for something, you persevere.’

He ended up scoring the winning goal in the Lithuanian Cup final and the lunacy of prejudice was exposed. ‘The same people, the skinheads with the swastika tattoos who were saying “Zigga, zigga” were then celebrating the goal in the final. After that, I didn’t have to pay in the shops or the cinema. I’m thinking, ‘”I haven’t changed” but their whole mindset was that a black person must be wrong.’

Back in the UK, he’s experienced the trials of the lower leagues, where he played for 12 different teams. He says he was most fragile after breaking a leg at Swansea in his mid-twenties. 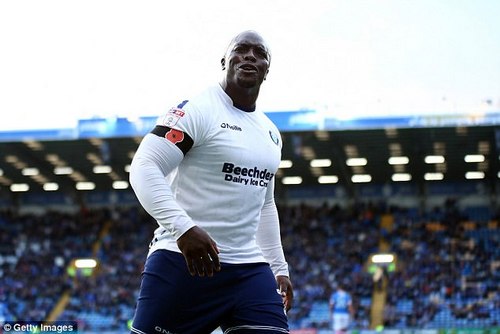 Back in the UK, he’s experienced the trials of the lower leagues, where he’s played for 12 teams

‘My Christian faith has guided me. After Lithuania, it never compares to that. “You’re fat”. Well, I’ve had people telling me they will shoot me because I’m black.

‘Talking does help. I am close to Clarke Carlisle. I went to see him after one of his dark moments in hospital. You never know what is going on behind the face.

‘I was anxious before going to see him. I struggled to understand it because he was one of my best captains. How can somebody like that be driven there? Clarke explained it is an illness and I’ve learned not to be quick to judge.

In his upcoming autobiography, he argues footballers are ‘hired help’ and says the average annual salary for a League Two player is £40,000. He did, however, feel a connection at Northampton, where he scored 74 goals in two spells.

Sadly, it ended with a feud with current England Under 21 boss Aidy Boothroyd, who claimed the striker’s car would always be full of KFC and McDonald’s wrappers. Nonsense, Akinfenwa says. 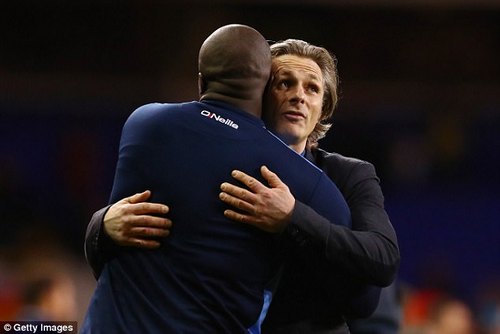 Akinfenwa has a brilliant relationship with Gareth Ainsworth, who he owes a lot to

‘I felt he went to cut me. It was wrong. Keep it mature. If he said Nando’s, I’d have maybe backed him because I love my chicken but I’ve never been a fan of KFC or McDonald’s. He tried to make out I was driving to training eating McDonald’s. How much did you dislike me to say that?’

While playing for AFC Wimbledon, he made headlines by scoring against Liverpool in a narrow FA Cup defeat. He claimed Steve Gerrard’s shirt and the pair remain friends, with the former England captain paying tribute to Akinfenwa’s ‘self-determination’ in the foreword to this book.

Akinfenwa also came across a 17-year-old Dele Alli while at Wimbledon. ‘We heard they had a baller. He was 17 but came in on me with a big tackle. He then told me to shut up. He showed no fear. It energised him. I spent 20 minutes trying to leave one on him but couldn’t get close. I thought, “Cool, I’ve got you at half-time”.

‘Bigger guys I’ve said that to have crumbled. He just smiled and said, “Cool”. That’s him. You want him to win. It’s not that he’s nasty. It’s a quirky cheekiness, he just loves his football. I saw him in LA and he was saying, “You so wanted to smash me when I was 17”. There’s no malice. He’s the best youngster I’ve played. Really, I’ve had some great experiences.’ 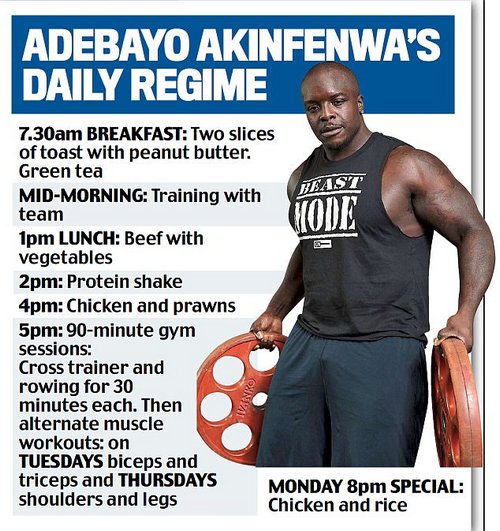 Wojciech Szczesny reveals why he left Arsenal for Juventus