Croatian fans want spectacular photos from Russia, but in the end gave birth to a new meme. The story happened in Nizhny Novgorod, where their national team sensationally beat Argentina with the score 3:0. Before the game (or after?) fans jumped into a huge hole to be photographed. Don’t know what uncommon for Croats are well on the road, and in the cities Network of city portals (hell, in the whole of Russia!) full of this stuff. So right now we’re going to tour the “road of glory”. 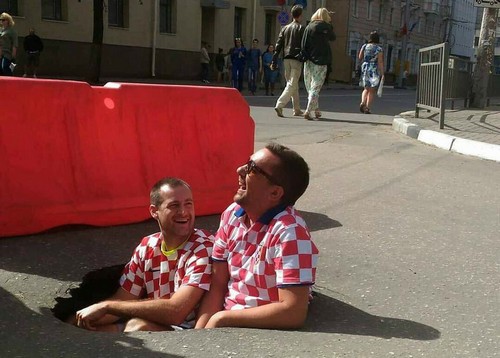 Football fans try on the main problem of Russia

Welcome to Omsk. Here in the street Irtysh Embankment disappear every year tiles. Once the situation has reached a maximum point of the absurd: a two-meter gap opened up between the Irtysh and the shop “Ocean”. And people even joked that this is the entrance to the subway or a 3D figure.

The legendary tunnel in the Omsk metro

In the capital of Bashkortostan foreigners would probably have liked the old Bielsko bridge that repair, repair, but did not repair! Deadlines repeatedly shifted, and even the head of the Republic at a recent inspection of the crossing stated that the contractors need to accelerate – for repairs motorists Ufa stand in traffic jams. While the repairmen are scurrying around in the hole on the bridge rest, guests of the 2018 world Cup.

In Ufa the Croats, too, have pictures to take

If in some cities the holes on roads and bridges – it’s a shame, Novosibirsk pit on the street of Kotovsky became a local landmark: the gaping babe even went to Google maps and got a Twitter account. If Croats won’t get to it or the authorities will undertake a thorough repair, we are ready to give visitors here a snapshot of the memory.

A hole exactly guests would put five points in Google

But in Yekaterinburg, the local residents have to explain to foreigners why the Central streets of the city storm drains can not cope with the rainfall. So, on Lenin Avenue after heavy rains appears spectacular puddle – is not a place for a photo shoot?

Not only enough bathing caps and beach attributes

In Yaroslavl this spring got a new one for fans of extreme road: sit in a garbage truck and fall into the unknown. Interestingly, this attraction would be popular with visitors?

Photos in a garbage truck would collect thousands of likes

In Tyumen the asphalt falls because of the new manifold

In Krasnoyarsk the local road builders are at war with the pit in front of the cancer center: each year, it is treated, and it still appears. 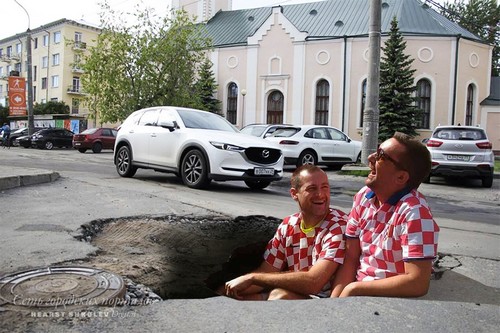 Arkhangelsk olinklyuziv: here and relax, and a photo for memory!

Such beauty can only be found in Archangelsk

In Rostov the surroundings added a great background to your photo: stucco and paintings