Meet the creative couple who spent six months building the tiny home of their dreams from scratch – proving there’s more to life than having a nine-to-five job.

It took Stevie and Margarita six-months to complete the build but they spent a whole year drawing up plans to throw them away before they even started. 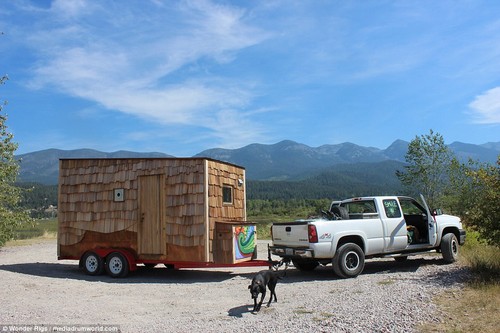 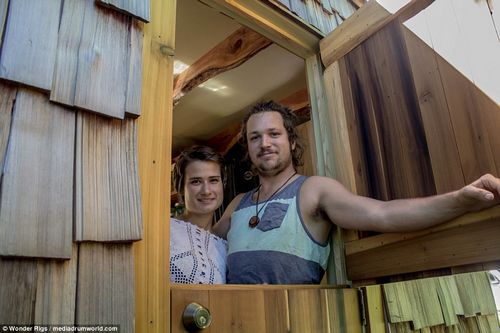 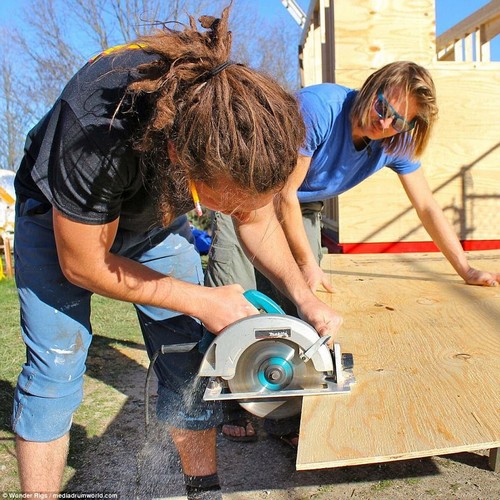 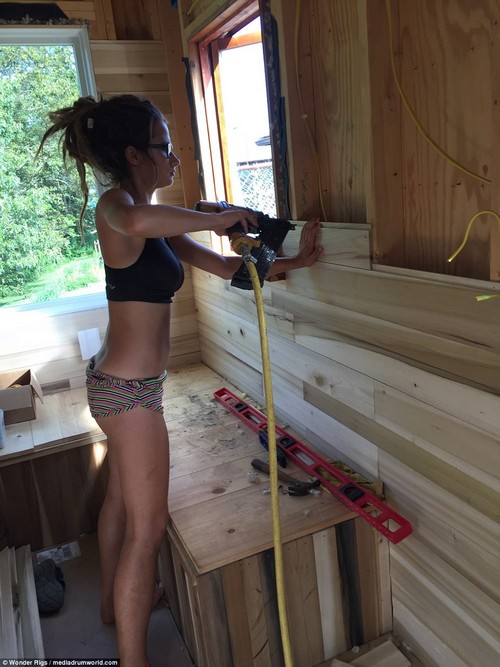 Margarita, pictured before cutting off her hair, uses a power tool to construct the inner walls of the living area of their tiny, mobile home. On the bench in front of her is a spirit level to make sure the slats are straight 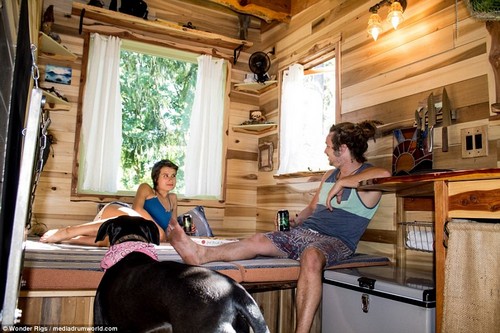 The happy couple, pictured with their dog who is wearing a pink bandana, drink cans as they relax on the bed which doubles up as the dining area

‘We had just graduated from university and knew we wanted something more than day jobs and rent.

‘We stumbled upon tiny houses on the internet and it seemed like the right thing at the right time – to create our own shelter and have it be portable since we were eventually headed west,’ said Stevie.

‘We needed independence, mobility, integrity, and creativity, building our own tiny house just fit the bill.

‘Before we had really committed to taking on this huge project, we spent about a year drawing up and scrapping floor plans, looking for ideas and inspiration online, emailing and calling people who have done it before, anything to try to get an idea of what we were in for and how to get started.

‘We taped out to scale floor plans of the tiny house inside of our living room to get a feel of just how small it was going to be.

‘We started stockpiling materials from craigslist, traveling all over to get the quality stuff we desired for as cheap as we could. We drove seven hours north to Pennsylvania from Virginia to get our sheep’s wool insulation.

‘We drove all around North Carolina to find windows. I must’ve called twenty-trailer dealers and manufacturers before choosing a person to make a custom one for us.

‘Once we picked it up, everything seemed more tangible, the commitment and all. We just started tackling one little project after another, researching different aspects of the build as they came, believing in ourselves and that all of our hard work would add up to something beautiful in the end.’

The pair shared their build on Instagram and having never taken on a build of this scale before, they learnt from any mistakes made early on. 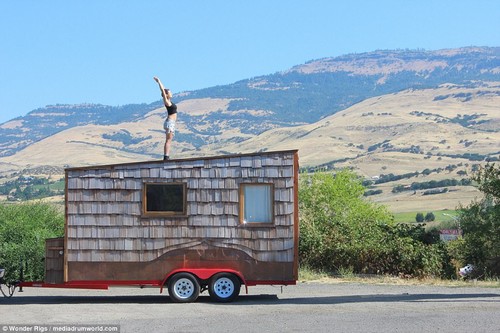 Margarita stands on top of her home, which resembles a wooden caravan sitting on a bright red trailer, as she stretches towards the sky 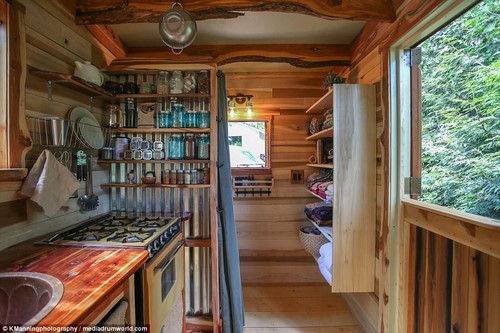 The kitchen, which is fitted with a four-hob gas oven, is seen with shelves for storing utensils, ingredients and crockery as well as a large window giving it plenty of natural light 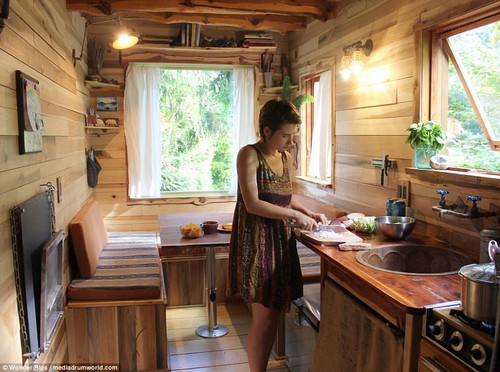 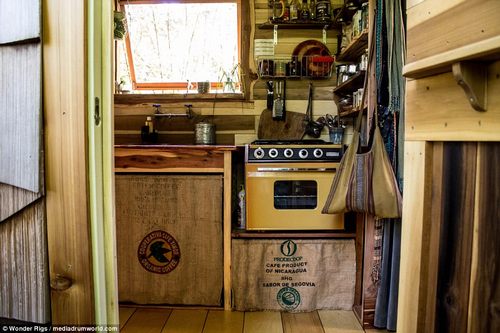 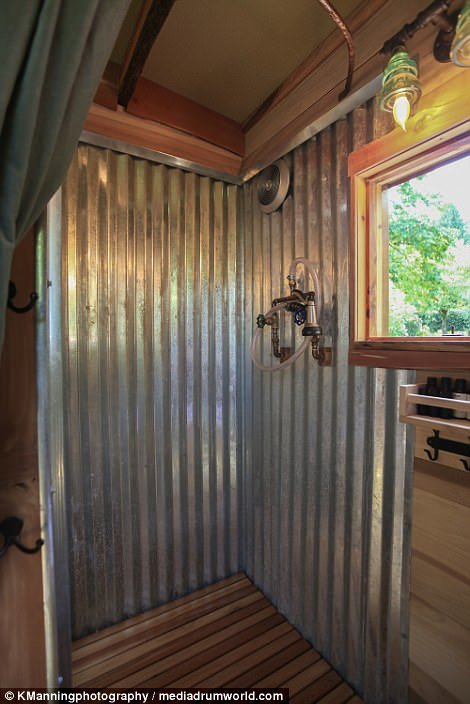 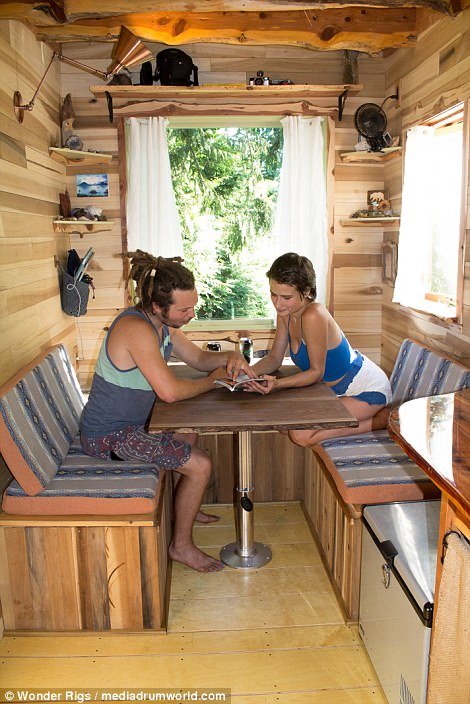 The bathroom (left), which is located behind the kitchen, consists of a shower head, two taps and corrugated metal sheets above a floor of wooden slats. On the other side of the kitchen, Stevie and Margarita read a book together at the dining table 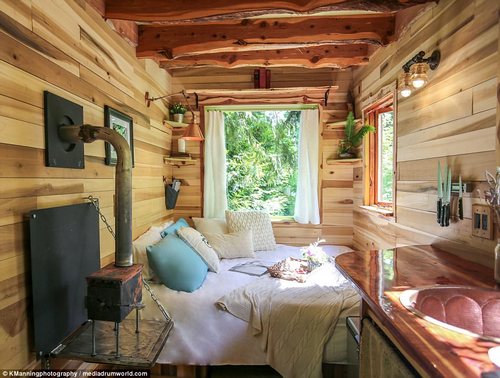 The dining area transforms into a bedroom to make the most of the limited space. A fold-down shelf is where the couple attach a heater which has a pipe leading outdoors

Stevie said: ‘When you are doing everything for the first time, problems always arise. From not having the right parts or tools and having to go to the hardware store five times in a day to just doing something wrong a bunch of times until you get it right.

‘We decided to do everything we could ourselves. It helped us to get creative and really have to learn about what we were doing so we could create what we envisioned. With every new project we took on came more obstacles.

‘We had to learn how to build windows, a door, the furniture, siding, roofing, etc, but we wouldn’t have wanted it any other way.

‘An early mistake we made was picking up the trailer unpainted. When the guy who built it asked me what colour we wanted it I didn’t realise saying none meant it wouldn’t be sealed.

‘We ended up having to remove some surface rust and paint the trailer ourselves but you live and you learn. I must admit, it was a pretty good introduction to the project.’

The measurements of the home are 7x16x11-foot, friends and family are shocked when they see what the couple have achieved and Stevie wants to encourage others to follow their dreams.

He said: ‘The thing I love most about our home is the experience and creative process it took to make it happen and how you can really feel that energy when you around it. It was more than just building a house, it was lifelong lessons,
community and relationship building, we were manifesting our dreams into reality.’ 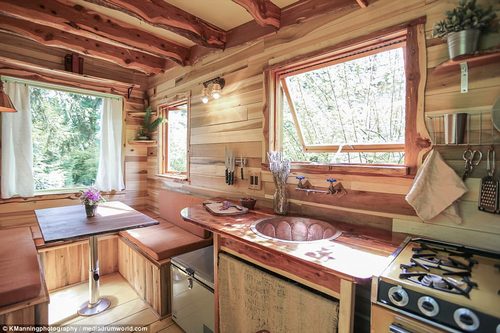 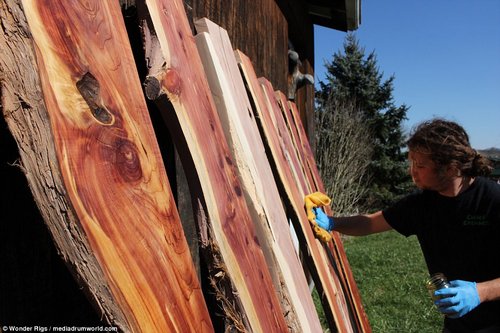 Hard at work: Stevie applies varnish to the interior wood panels of the house before later fitting them in his homely kitchen 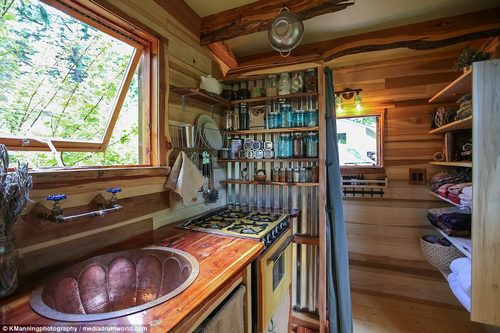 Interior design: Stevie and Margarita’s kitchen includes a copper sink, a wooden surface for preparing food and a cooker

‘Every detail has a story, it’s our art,’ Stevie added.

‘If you really want something you have to go for it, you don’t have a say in the matter after you commit yourself, you only have more reason to figure things out.

‘It’ll feel long and be exhausting, it may never even end, but it’ll be a wholeheartedly satisfying journey.

‘Our friends and family are usually shocked and in awe. The huge cedar rafters almost knock the wind out of you when you enter.

‘New friends and people who check it out can feel the hard work and long hours that went into it.

‘You can tell the walls around you were milled just down the road from the house’s conception.’ 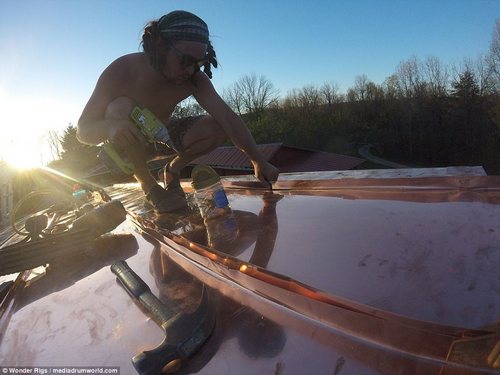 Stevie fixes the roof of his cabin as the sun sets. He said: We had just graduated from university and knew we wanted something more than days jobs and rent’

The most luxurious glamping spots in the world revealed 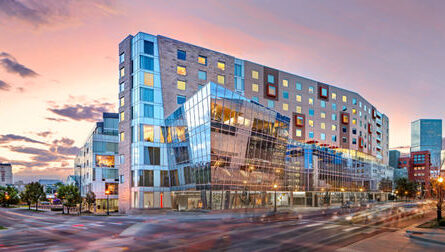