You wouldn’t know it from her modelling snaps – but this Swede has a daredevil streak.

And it nearly cost her her life.

Melissa Miller nearly died during a mountaineering mishap, contracting hypothermia on a gruelling winter expedition in Norway’s mountains. And now the 31-year-old, from Borlange, Sweden, has issued a stark warning to fellow thrill-seekers about the dangers of extreme adventuring. 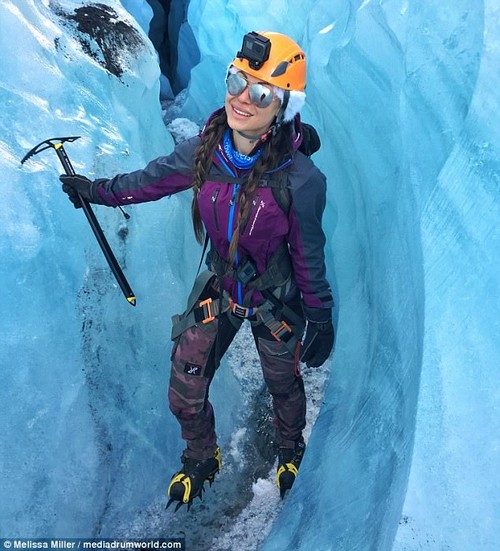 In action: Dressed in her climbing gear, Melissa pictured  in the middle of a dramatic ascent on the Solheimajokull glaciers in Iceland 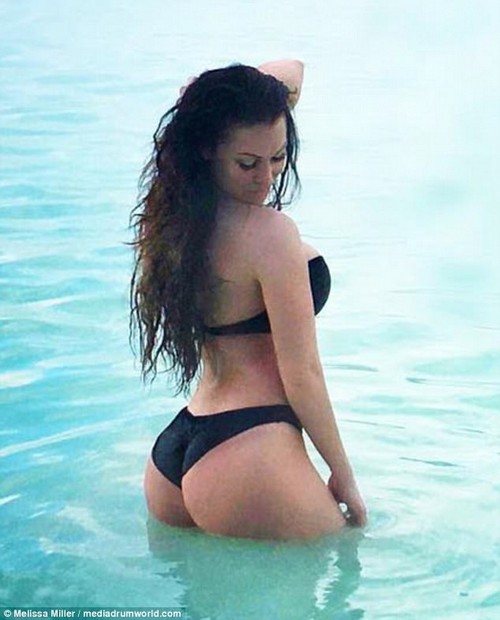 Popular: The Swedish-born beauty was struck-down with hypothermia on a daring mission 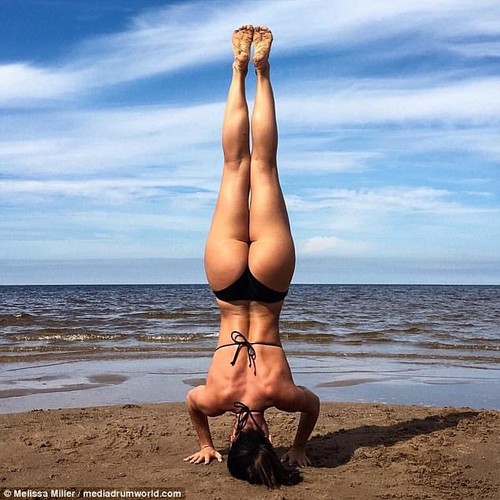 Beach body-ready: The 31 year-old flaunting her assets on the golden sands of a Thai beach 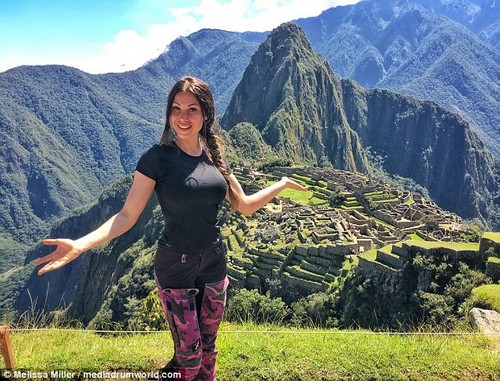 World-traveller: The brunette beauty seen posing for a snap at the entrance to Machu Picchu 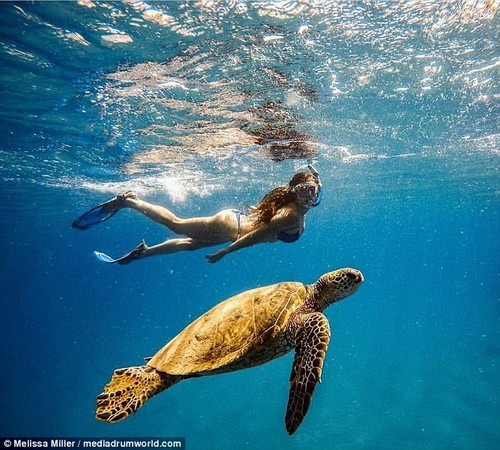 Making a splash: The bikini-clad adventurer gliding smoothly through the clear-blue sea in Bali, Indonesia, where she’s joined by a turtle

Miller – whose glamorous snaps have given her a huge Instagram following – spent months travelling the world in search of new experiences, everywhere from Thailand to Bali, before settling in Norway to scale the snow-capped peaks.

‘I was studying to become a mountain guide and it was the first winter I had experienced in seven years. Well, you can say that I learned my lesson,’ she said.

‘Me and the group I was with were traveling by touring skis with skins and sleds, going uphill a lot. A few days in to the expedition we got caught in a white out, we could hardly see our hands in front of us.

‘The wind was hard and the temperate dropped quickly. This forced us to stop and orientate a lot, checking the map and compass to make sure we didn’t go in circles.

‘At the time, I wasn’t used to these cold and rough weather conditions, as I had spent seven years abroad in warm countries, which resulted in me doing my first mistake. I didn’t temperate adjust.’ 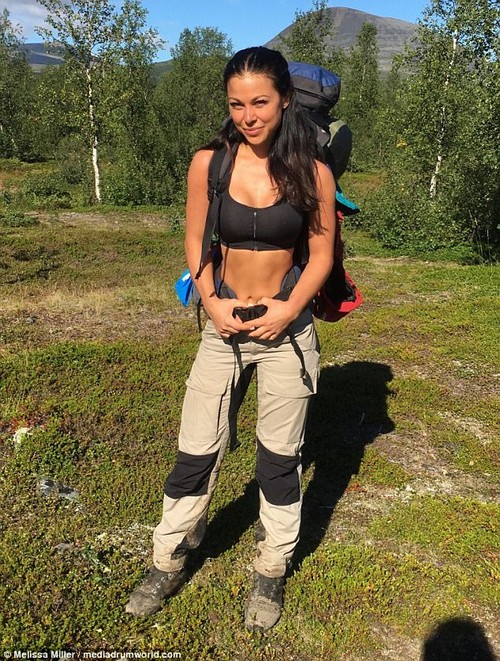 Risk-taker: Melissa almost lost her life during an expedition in the Norwegian mountains 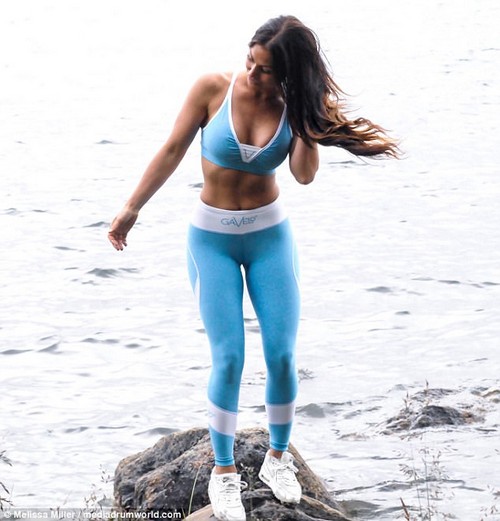 Body beautiful: The Instagram star has amassed plenty of fans thanks to her fit figure 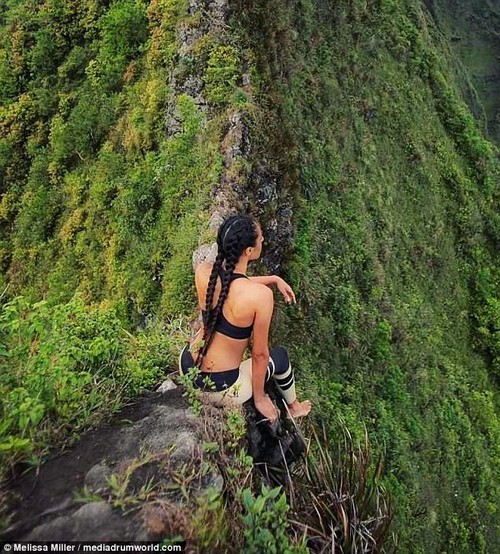 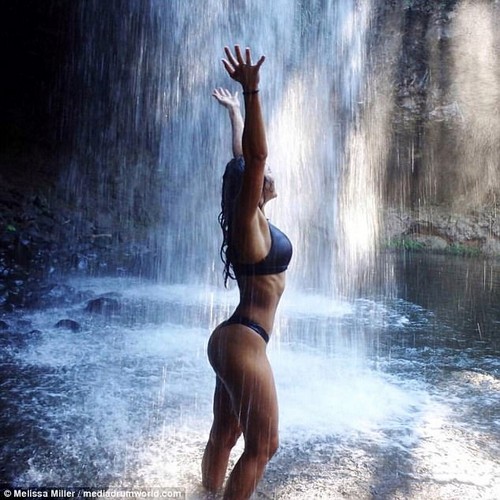 Loving life: Standing in a black bikini beneath a waterfall in Bali with her arms stretched out 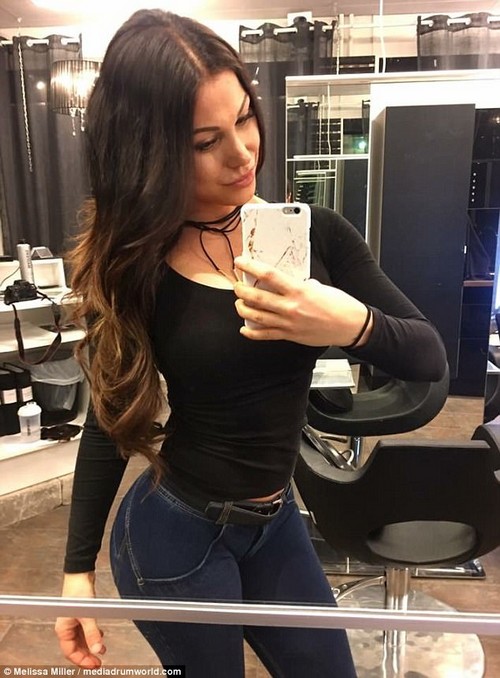 Strike a pose: After travelling the world, Melissa went to Norway to become a mountain guide 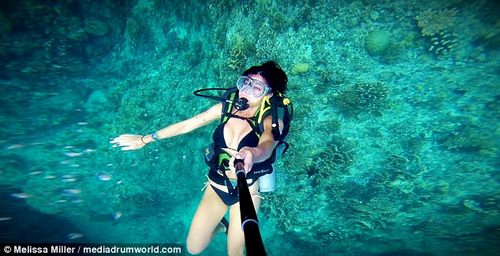 Selfie-esteem: The Borlange-born traveller still managed to pose for a photo while diving

She said: ‘I became sweaty when we skied uphill with our heavy sleds, and when we stopped to navigate I became cold due to the wet clothes. Then I made mistake number two, I didn’t change my sweaty clothes to dry ones.

‘Eventually we had to stop and dig emergency pits to wait out the storm in. As I was sitting in the pit with my friend, with the red tarpaulin shaking from the wind over us, my body started to shut down.

‘I remember how scared I was. I couldn’t get warm. Suddenly my shivering and shaking stopped, which is a late sign of hypothermia. I thought about my mum, my dad and strangely I started to feel better, almost warm.

‘I started to open my jacket, leaning back. My friend told me that my last words before losing consciousness was that I was getting hot and that I was going to sleep a little.’

Thankfully, her friend recognised this as a warning sign and slipped into emergency rescue mode.

‘Luckily my friend reacted to this and immediately took action. He shook me, dragged me out of the pit, dressed me with all the clothes he would find and the whole group started the rescue,’ she added. 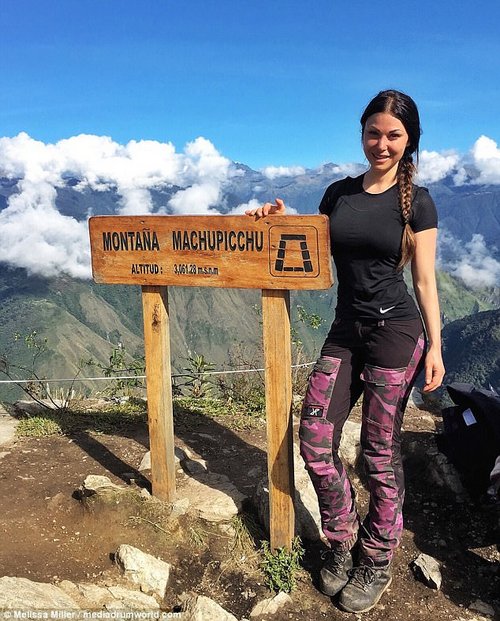 Take a hike: Enjoying a photo opportunity high in the Andes mountains of Peru 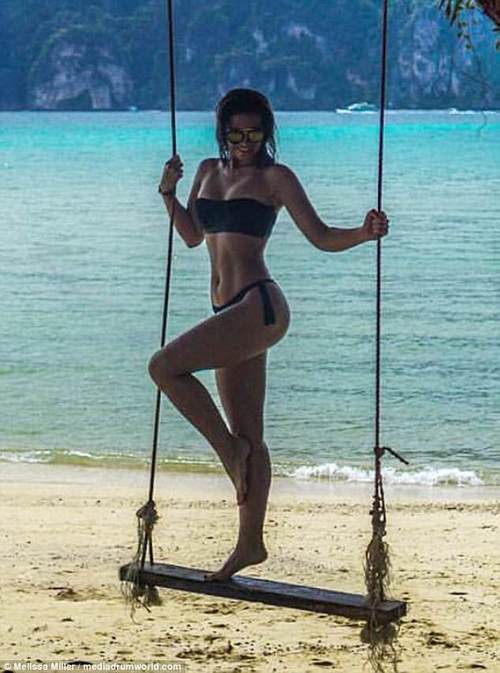 Life’s a beach: The stunning social media fave poses up a storm on a seaside swing 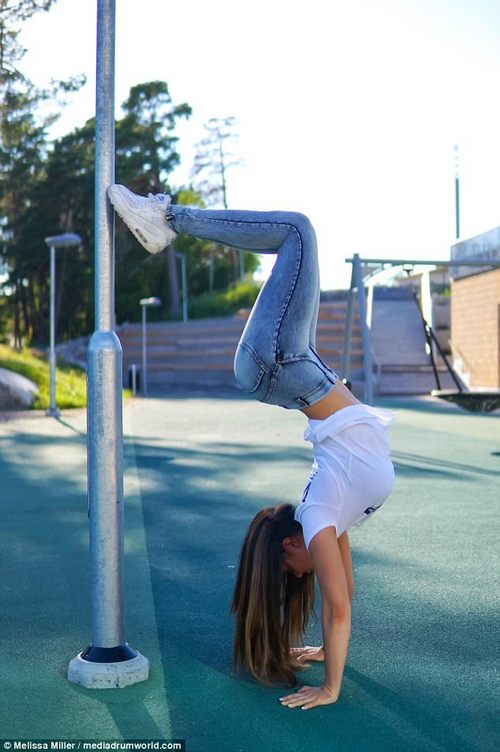 If you’ve got it, flaunt it! Melissa delights her myriad followers with another impressive snap 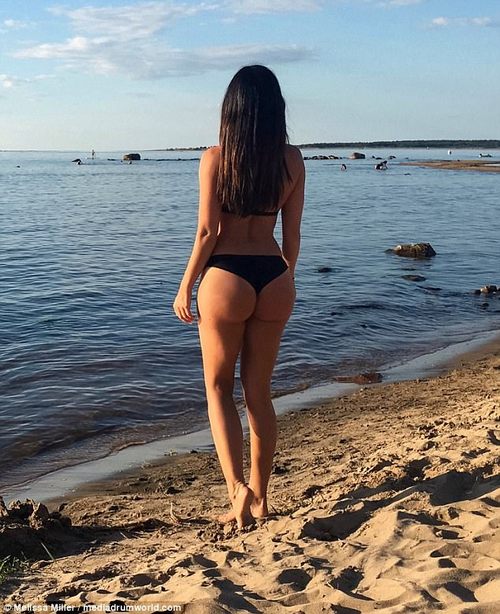 The curvaceous adventurer is currently studying fitness and health

She works as a model, an influencer and a blogger and is currently studying fitness and health.

She has worked in 11 countries and on her travels she’s taken part in a range of adventurous activities including river rafting, sea kayaking, diving with sharks, snorkelling, bungee jumping and has even driven a quad bike on a volcano.

‘I feel very grateful, blessed and lucky. But also, I know that I’ve worked hard to get to where I am today, for everything I’ve accomplished and done, so I’m also proud of myself,’ she added.

‘I feel rich in the way money can’t compete with and I’m so grateful for my family and my amazing friends.

‘Well, I’ve done and experienced a few things so when meetin
g new people, I don’t lay it all out there at once. But the things I tell people about usually inspire them, I hope.

‘I want to inspire people to live their life fully and completely, the way they want to, whatever that may be.’ 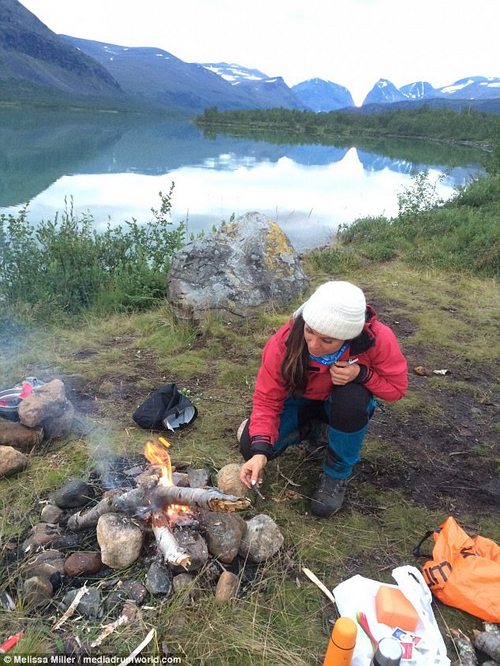 Life in the great outdoors: Melissa tries to offset the cold Norwegian weather by lighting a fire 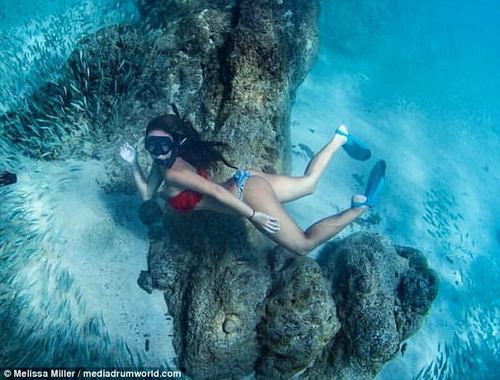 Taking the plunge: Snorkelling deep beneath sea level while surrounded by fish 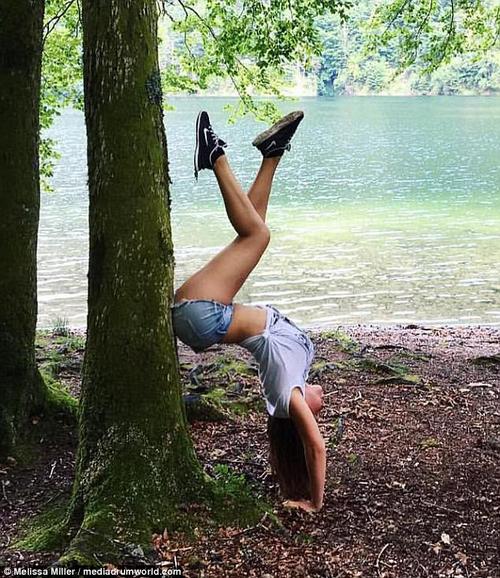 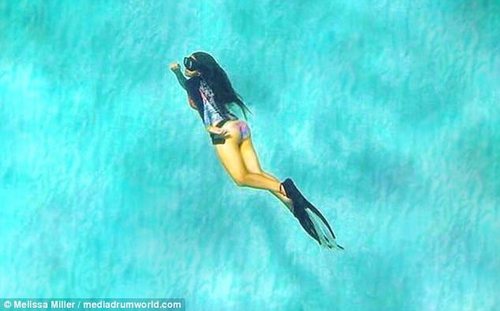 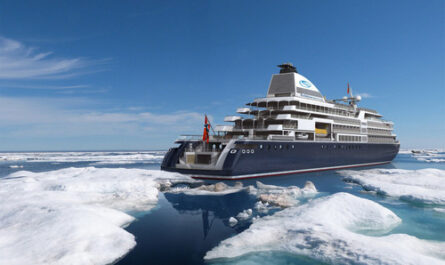 Want to be on a nearby deckchair with a star? Tell where celebrities relax this summer! 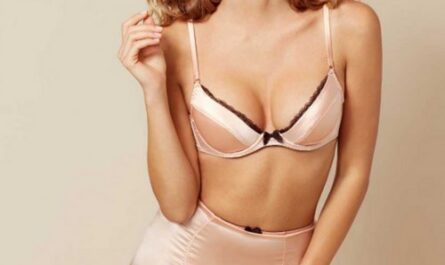 Where to go without a visa? 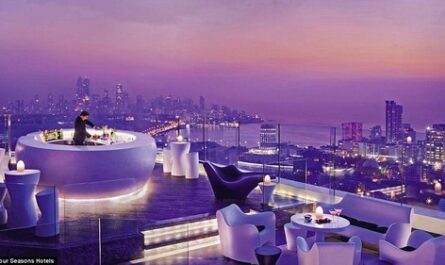 New book reveals the best bars to hit on every continent