The group were stuck on the bus without any news on when they were due to start moving again and only a measly £3.50 food voucher from Ryanair in way of immediate compensation.

One passenger fumed on Twitter: ‘Stuck on a bus & can’t leave no communication saying what’s going on but it’s ok Ryanair gave us £3.50 for food.’

A bus carrying Ryanair passengers diverted to Stansted amid a huge bomb hoax broke down on its way to another airport.

Weary travellers were forced to endure another frustrating leg to their already prolonged journey when their coach pulled up on the way to Luton.

One Ryanair passenger fumed on Twitter: ‘Stuck on a bus & can’t leave no communication saying what’s going on but it’s ok Ryanair gave us £3.50 for food’ 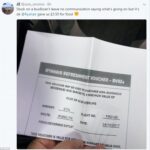 As the incident unfolded, he added: ‘Now been taken off bus back into hold area #shambles.

Before exclaiming: ‘We’re OUT thanks the Lord WE’RE OUT!!’

The passengers had been forced to board the coach after a prankster’s bomb threat saw their flight intercepted by two RAF fighter jets and escorted into Stansted in Essex.

Typhoons screeched across the sky at 720mph and caused a sonic boom as they were dispatched to the Suffolk coast to meet the 189-seater Boeing 737 flying to Luton from Kaunas, Lithuania at around 8.30am.

Passengers told to leave their hand luggage at the back of the plane for searches were escorted off by armed police after the jet was taxied to a ‘safe zone’ designed for use in hijackings and terror attacks.

Ryanair said the plane was diverted to Stansted because of a ‘hoax security alert’ but passengers claimed the threat was made before they left Europe.

Jonathan Zulberg revealed the flight had been delayed for up to 40 minutes in Lithuania and admitted he ‘was pretty surprised the plane was allowed to take off’.

He was on board the plane when he found out after asking an air stewardess why the plane was being diverted.

‘Apparently threat was made while we were still in Kaunas,’ he said, adding: ‘When she told me I told her I preferred that I had not known’.

He said a stewardess told him there had been a bomb threat made in Lithuania but other passengers learned that only when the captain made an announcement after the plane had landed in Britain.

He said: ‘First (the) pilot told us of diversion. Then only once landed after about 5-10 mins pilot made announcement of bomb threat. When I heard I was pretty surprised the plane was allowed to take off.’

Mr Zulberg added: ‘Everyone had to drop hand luggage at the back of the plane.’

After the plane landed, he tweeted: ‘Was on the flight just been escorted off by armed police… Everyone now on buses. Escorted off plane by armed police all standing in line. Around 20-25 fully armed officers. Sniffer dogs going round the luggage now.’

Fellow passenger Indre Aulaseviciene said: ‘On the airplane no one said nothing, they just said we are in Luton airport and we were going in circles.

‘Something happened in Kaunas and someone said there was a bomb.

‘When we landed we saw a man with guns lots of police and that is it.

‘I was just glad we landed.’

Another passenger, who did not want to be named, said: ‘Before we landed we were told we were going to Luton for some reason, it was not funny.

‘It was very nervous on board, there were plenty of passengers with babies.

‘We couldn’t go outside very quickly and after that we left on the land.

‘When I found out it was a bomb scare it was just terrifying.’

The Typhoon fighters shadowed the airliner over East Anglia as it was diverted from its destination of Luton and ordered to land in Stansted Airport, Essex.

The aircraft was quickly surrounded by armed police after it landed safely and passengers were told to leave their luggage behind and get on a waiting bus.

Police experts examined the plane at the side of the runway but found ‘nothing suspicious’.

A Ryanair spokesman said: ‘This flight from Kaunas to London Luton was delayed ahead of take-off after Lithuanian authorities received a suspected hoax security alert.

‘Police carried out a security search and cleared the aircraft to return to service, customers boarded and the flight departed to Luton.

‘While on approach to Luton, upon the request of UK authorities, the aircraft diverted to London Stansted in line with security procedures, and landed normally at Stansted, where customers disembarked and were transferred to Luton by coach. Local police carried out a further search and cleared the aircraft to resume service once more’.

But in Lithuania senior officials were today dismissive over any peril to the aircraft.

The director of the Lithuanian civil aviation administration Joris Gintilas said: ‘There is only an assumption, but that’s from unofficial source, that Kaunas airport service got a message about a bomb either in the airport or in a plane.

‘The information didn’t check out, it was decided that it was a faulty message, not serious, and the plane was allowed to depart.’

Asked about the incident, Laurynas Naujokaitis, Investigator-In-Charge of Aircraft Accidents and Incidents in the country’s Justice Ministry, replied: ‘Nothing happened in Kaunas in my opinion.’

An RAF spokesman said: ‘The RAF can confirm quick reaction alert Typhoon aircraft were launched this morning from RAF Coningsby to intercept a civilian aircraft.

‘The aircraft was escorted to Stansted airport. Typhoon are authorised to transit at supersonic speed for operational reasons.’

A spokesman for the airport, in Essex, said police were on the scene after the passenger plane was diverted from its route between Kaunas, Lithuania, and Luton Airport, in Bedfordshire.

He added all flights had now resumed after being held for about ten minutes from 8.55am on Wednesday.

The spokesman added: ‘Flights were briefly held while RAF Typhoons escorted the plane in. All flights are now operating as normal. It was literally a momentary pause.’

The sonic boom was heard across East Anglia at 8.36am, especially over Suffolk, where windows rattled, people fell out of bed and others feared there had been an explosion in the sky.

The Typhoons flew from their Lincolnshire base to the coast between Felixstowe and Aldeburgh in around three minutes before following the Ryanair plane into Stansted in Essex.

The roar was so loud it registered on the British Geological Survey’s earthquake sensors.

Police with rifles, helmets and bullet-proof vests accompanied ground crew to the plane

Molletts Farm tweeted: ‘My wife was driving near Little Glemham and thought something had hit the roof of the car #sonicboom #Suffolk

Ruth Bolton‏ tweeted: ‘My house shook too. It was enormous. Birds have all taken to the skies #sonicboom

And @countrymousie wrote: ‘I had one foot in the bath at the time… nearly one in the grave within 5 mins… #sonicboom’.

Britain’s rapid reaction team: How mid-air emergencies are dealt with

The so-called Quick Reaction Alert is said to be a routine part of the RAF’s role in defending UK airspace.

Aircraft responding to QRAs are kept on high alert and can take off ‘within minutes’, the air force said, and are often used to intercept unidentified planes.

Typhoon pilots at RAF Coningsby and RAF Lossiemouth are on standby 24 hours a day to defend UK airspace.

Stansted is a designated airport for dealing with hijacks and major security alerts.

Such incidents are normally dealt with in a remote part of the airfield to the north-west of the terminal building.

An airline spokesman at the time said UK authorities had ‘received some vague security threat through an anonymous phone call’.

Essex Police said that the incident was ‘not believed to be a hijack situation or terror matter’. 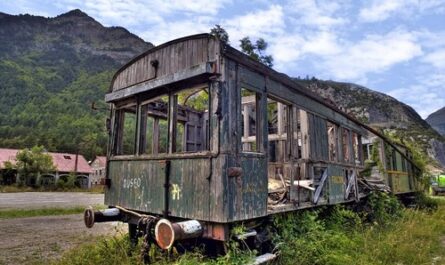 Abandoned Canfranc station in the Pyrenees set to reopen 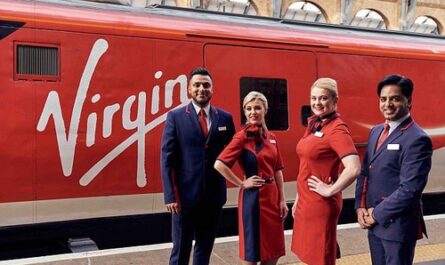