Skip to content
19.10.2020
Travel
How to get there from a hundred rubles to Vladivostok
Olga Tsynskaya

The author of the book “The Hitchhiker’s Guide to Russia” Natalya Korneva traveled 150,000 kilometers by hitchhiking. In an interview with RIA Novosti, she told how to behave in the cars of strangers, what to take on the road and what dangers lie in wait for a girl traveling alone.

Hitchhiking – free movement on a passing vehicle with the consent of the driver.

This is a whole philosophy, and not just a move from point A to point B.

Already in the third year of the institute, I dreamed of traveling around the world.

But I wanted to not only wander the continents, but also work in different countries, from the inside getting acquainted with local traditions and mentality. The dream came true: I left for China for six months, worked in a children’s theater performance.

Returning to Russia, I decided to travel around my native country. I did not read the hitchhikers forums, I did not find out anything, just went shopping – I bought a sleeping bag, a backpack, awning, a dress, an atlas of Russia and several packages of instant cereals. 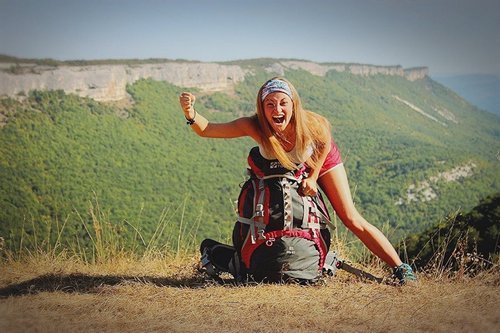 On the day of departure in my pocket, I was only 100 rubles, but there was a determination to overcome any obstacles. And only one thought in my head: “I believe that people in Russia are the most hospitable and friendly. I’ll get to Vladivostok and everything will be fine! “So it turned out.

The most important thing in traveling is people and their relation to the place where they live.

When a person with love talks about his homeland, you involuntarily and yourself fall in love with her. 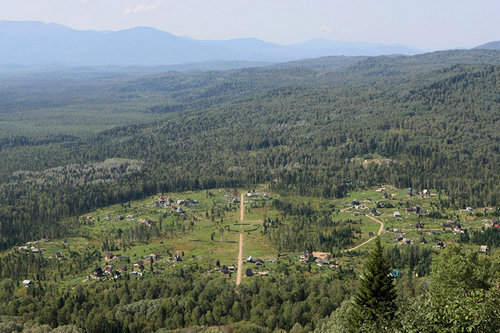 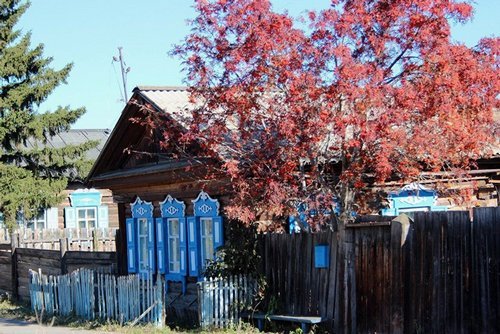 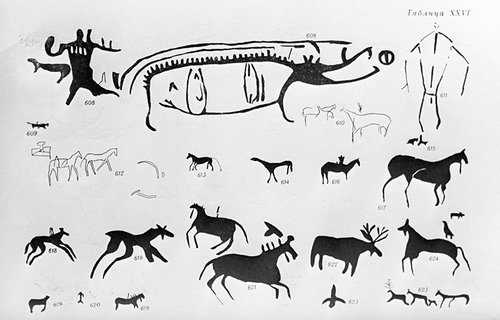 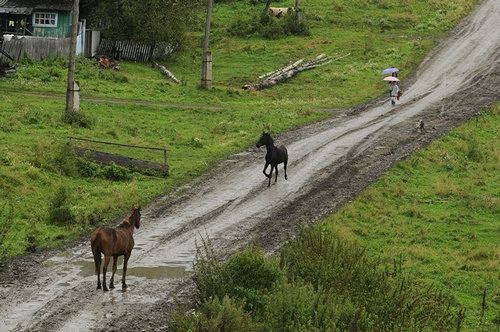 The rock drawing made 15 thousand years ago is a find of archeologists of the Institute of the History of Philology and Philosophy of the Siberian Branch of the USSR Academy of Sciences in the Shishkinsky Rocks area on the bank of the Lena River, the site of ancient people’s sites.

In the backwoods of the Irkutsk region, I met a local writer and historian. Despite his advanced age, he gave me a tour of the rocks of Shishkinsky Pisanits. I gave my book.

And eight years later I returned to visit him and handed my book “The Hitchhiker’s Guide to Russia”, where our first meeting was described.

In the Krasnoyarsk Territory, I plunged into the life of the Sayan community, practically cut off from the civilization. A month was preparing the meal for the boys in the monastery and working on the household with the local residents. Another faith, a different way of thinking is fascinating, and I’m always ready to open up to everything new, but with caution. Such an experience is priceless.

In 2013 I went to Magadan. The harsh, uninhabited nature of the north-eastern part of the country also leaves a deep impression, especially if you read Varlam Shalamov before the trip. On the sides opened endless valleys of death, and I cringed from the stories of road workers about their findings in the permafrost. On Kolyma, I never wanted to be silent.
For me, hitchhiking is a way to go your own way.

You every second have a choice, where to go, with whom to communicate, where to spend the night. You are not just your own boss, but also a builder of your own life, because everything depends on you, on the ability to get along with people, to get out of a difficult situation.

But hitchhiking is not just a cycle of emotions, new acquaintances and changing landscapes outside the window.

First of all, this constant dialogue with the driver, and if he wants to sleep, your task is to talk, talk, talk. It happens that you are asked the same questions and it is necessary to repeat the same story from day to day – this is somewhat tiresome. 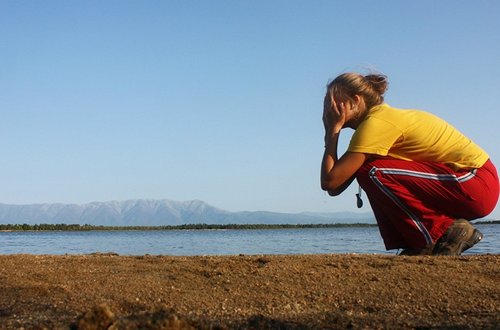 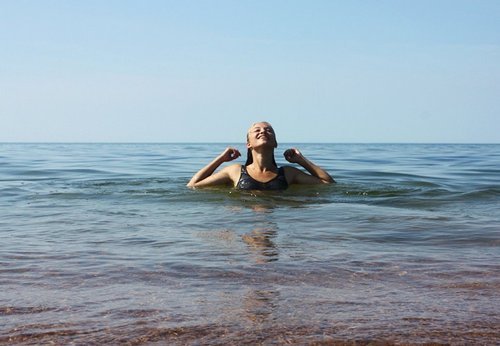 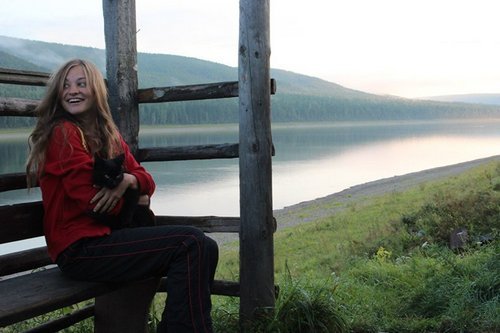 © Photo: from personal archive of Natalia Korneva
Fortunately, our country is so beautiful and unspoiled that it is possible to stay overnight in almost any place.

I like to sleep on the river bank, you can swim in the morning, wash, cook porridge and drink tea. But I’m very afraid of the dark, and I do not always manage to overcome myself, that’s why there were also fur cabins, DPS posts, museums, houses of local residents.

One of the most important things in wanderings is the book.

Once I took the book of the Exupery Citadel. This is something incredible. Sometimes I spent more than six hours catching cars, walking along empty streets and routes – I had a feeling that I was doing something wrong. At such moments I took this book-the Bible and opened it on the first page I came across. 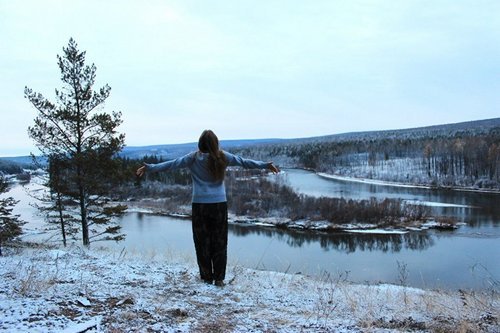 Surprisingly, every paragraph beat right at the target. If God speaks to us in the language of life’s circumstances, then in those moments he spoke to me through the Citadel.

To take with you everything you need, when hitch-hiking, I always close my eyes and visualize possible situations.

For example, I go over in my head different weather options, possible in one or another locality, and I remember about a raincoat, warm thermo-noses.

By the way, when going on a long journey, take with you at least one thing that will connect you mentally with the house.

Sometimes a simple soft toy helps to find coziness and calmness when it becomes sad and lonely.

Although the first trip I went without money, like many hitchhikers, more “at zero” I did not move. In addition, it is always better to take dried fruits, seeds, cereals with you. 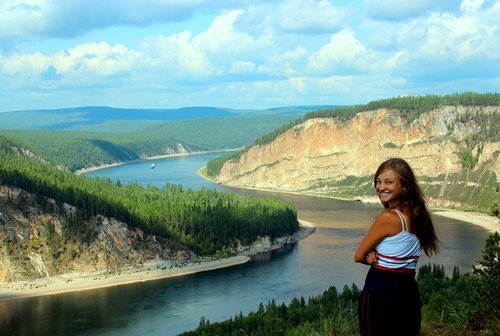 The Lena River, the rocks of Cheek, Irkutsk Region

And to inexpensive and delicious to eat, pay attention to roadside cafes, next to which are parked waggons.

Each ride has its pros and cons.

Legkovushka rides faster, often drivers – local, they can learn something new. Less is still more dangerous. In waggons, you often meet drivers who understand a hitch-hiker from a half-word and have something to talk about themselves. 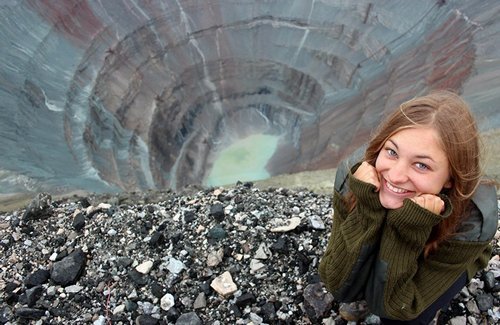 Furas go slower, but if an adequate driver is caught, you can spend the night in the cabin.

The danger must always be remembered.

You should not catch a car on sharp turns, and do not immediately agree to a trip with the driver, who immediately says: “Sit down, I’ll drive!”

In this case, I always ask: “But where are you going?” And if I feel something wrong, I immediately refuse.
I’m a lover of single trips. Only this way you can truly immerse yourself in the moment “here and now”.

But, if we talk about hitchhiking, I recommend everyone, absolutely everyone, have a partner. It’s dangerous for a girl to ride alone!

You never know what kind of person you are driving.

In 2016, near St. Petersburg, there was an incident with me, after which I no longer go hitchhiking alone. I had to get to Valdai. I caught the car under Kolpino, a guy in his 20s in work clothes was sitting behind the wheel. Five minutes later he said that he needed to bring the documents to the plant, but it did not take long. This happened, and I did not hesitate to agree, besides the documents lay right in front of me. Arriving at the checkpoint, the driver got out of the car, looked around, again sat behind the wheel and said that there was closed, we need to drive away. Then I realized: he brought me to the forest. 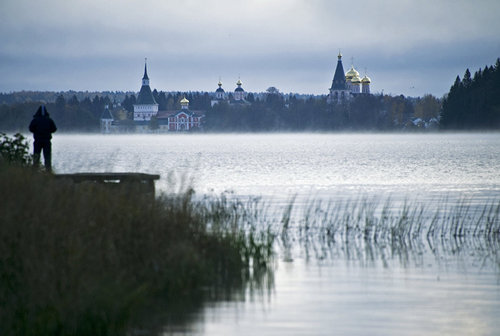 Dawn on the Valdai lake. View of the Valdai Iversky Bogoroditsky Svyatoozersky Monastery.

I jumped out of the car and ran toward the checkpoint, screaming, but there were no people around. And the driver took out an electric shocker and started to beat me in the leg with a current. It was not painful, but I forced myself to cry and fight in cramps – showed that it was pointless to do anything with me. Nevertheless, he still carried me to the forest.

I was lucky, just miraculously managed to get out, causing pity – he did not do anything. Catch it and did not succeed.

I will not advise anyone to hitchhike. It’s not a healthy lifestyle, not a sport, not a vegetarian

This is not the style of life that is worth impose. Here you can only share a positive or negative experience, without embellishing the circumstances, so that the person asked himself: “Do I need this?”

If yes – then go ahead, if not – then I will also shake hands. The main thing is that the decision should be weighed and go from the heart.
Post Views: 69

Young boy is photobombed by a breaching whale off Canada 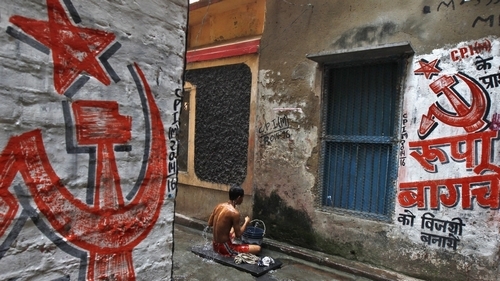 Exclusive PEOPLETALK: how and with whom did you go on vacation Olga Seryabkina?

One thought on “The Hitchhiker’s Guide to Russia”