A light-hearted video has imagined what would happen if straight couples were treated as many gay couples are on holiday.

Inspired by research that revealed half of LGBT+ couples feared being judged while abroad, it sees a straight couple being asked to stop kissing in a restaurant, mistaken for colleagues on a business trip, and reassured by a hotel receptionist that they would be given separate rooms.

The uncomfortable disparity between the experiences of same sex and straight couples on holiday is pointed out in the tongue-in-cheek film, which has been produced by Virgin Holidays and ATTN:. 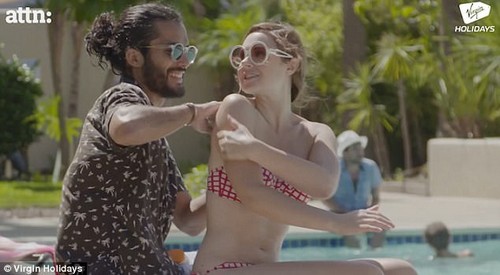 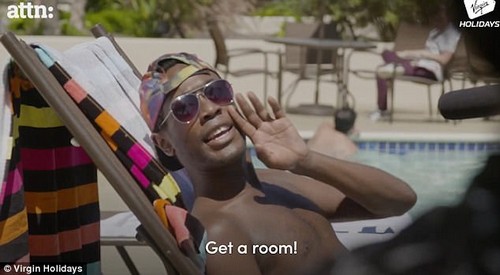 In the clip a straight couple can be seen facing just some of the prejudices LGBT+ couples come up against on vacation such as being told to ‘get a room’ and being told not to kiss in public.

The video was created after research revealed that half of LGBT+ people feared  judgement, mockery and discrimination while abroad.

Furthermore a mere one in twenty same sex couples feel comfortable showing affection in public compared to 84 per cent of straight couples who feel at ease.

The study revealed that sadly, gay couples have reason to feel reluctant to show open affection with 58 per cent admitting to previously being stared at 35 per cent laughed at and a third (29 per cent) had been verbally abused.

Shockingly one in ten of the LGBT+ couples studied revealed that they had been threatened with psysical violence while on holiday. 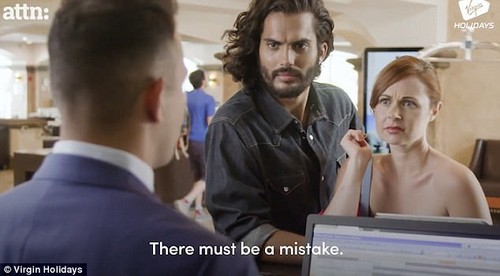 LGBT+ couples said the discrimination was evident in tourists from around the world (40 per cent) with one in four saying they had been discriminated by other British holidaymakers.

However, hoteliers played a big role in the issue with a third agreeing they feared judgement from hotel staff and more than half have had their relationship status questioned, including being offered single hotel rooms and having their beds separated by housekeeping staff. 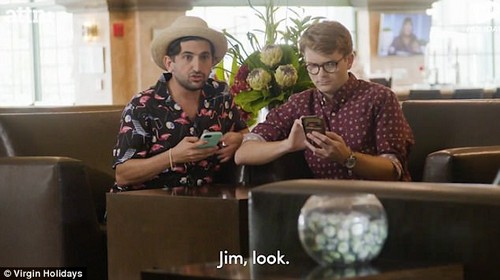 The video was created after research revealed that half of LGBT+ people feared judgement, mockery and discrimination while abroad 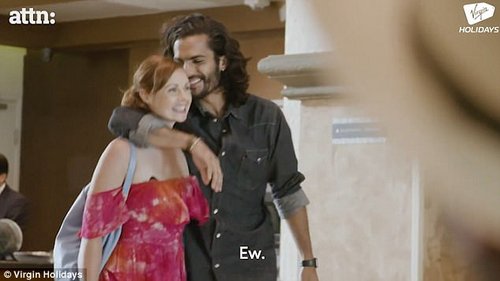 Matt Cain, Editor-in-Chief of Attitude, Europe’s largest gay magazine, added: ‘The statistics to come out of this survey are truly shocking but confirm what we at Attitude have been aware of for a long time.

‘We’re glad that a popular holiday company like Virgin Holidays is now drawing attention to the enduring, uncomfortable truth about how gay people are treated when travelling to so many destinations around the world.

‘It’s important that we keep the conversation going to tackle overt and underlying discrimination so that gay men no longer expect to encounter homophobia on holiday – and don’t have to put up with it.’ 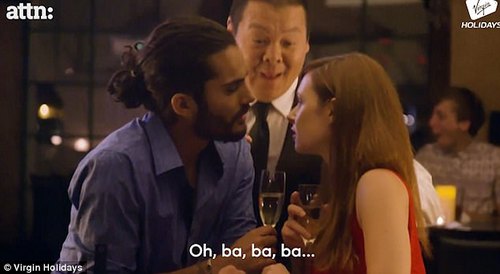 In 2016 Virgin Holidays unveiled a three-year plan to become one of the friendliest LGBT companies in travel with a plan that focused on empowering staff, educating customers and influencing suppliers.

This year the tour operator has focused on using its influence to advance LGBT+ equality in conservative regions such as the Caribbean.

At the Caribbean Hoteliers and Tourism Association Conference in Miami the travel company convened close to 100 of the most influential industry stakeholders, and laid out the argument for LGBT inclusion.

Despite the Caribbean having some repressive laws, the Association has agreed to establish its first-ever working group to address LGBT issues in the region.

The most recent partnership with issues-driven content publisher ATTN: has been released as part of the overall business objective to better educate customers about the issue, and encourage positive change to tackle discrimination. 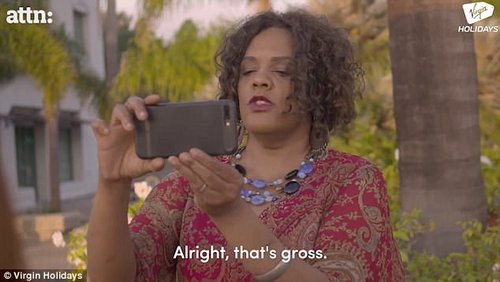 Sir Richard Branson commented: ‘At Virgin Holidays, we believe everyone, regardless of their sexual orientation or gender identity, has the right to be whoever they are, wherever they are.

‘That’s why it is shocking that in today’s society some of us can’t even enjoy a simple holiday without fear of discrimination. It’s fantastic that Virgin Holidays are raising awareness around this important issue.’

‘We want everyone to take on the world and that’s why we’re working with one of the biggest issues driven publishers to continue to raise awareness of the issues faced by LGBT+ travelers on holiday, and to work with our partners abroad, to give customers the best experience possible.’

One woman’s gaffes that ruined her holiday in Rome