President Recep Tayyip Erdogan says the offensive – which began with air raids on Tuesday – is aimed at removing Kurdish-led forces from the border area and creating a “safe zone” so millions of Syrian refugees can be returned.

Turkey has launched a major military operation in northeast Syria.

The move came after the United States announced it was withdrawing its troops from the region, leaving the Syrian Democratic Forces (SDF), its main ally in the battle against the Islamic State of Iraq and the Levant (ISIL or ISIS) armed group, without US military support.

Heavy clashes abetween Turkish forces and the SDF are under way in the Syrian border towns.

The SDF, led by the Kurdish People’s Protection Units (YPG), has appealed to the US and its allies for a “no-fly zone” to protect it from Turkish air attacks. Turkey considers the YPG a “terrorist” group.

“The ambassador in France was summoned in the early afternoon,” the source said on the second day of the Turkish operation against Syrian Kurdish forces.

The Turkish president said Ankara will send the 3.6 million Syrian refugees in Turkey to Europe if European countries label the country’s military operation in Syria as an occupation.

“We will open the gates and send 3.6 million refugees your way,” Erdogan said in speech to his AK Party.

“Since the operation started, it seems Ankara is not happy about what the international public opinion has been, because the rhetoric in media is thought to be against Turkey,” she said. 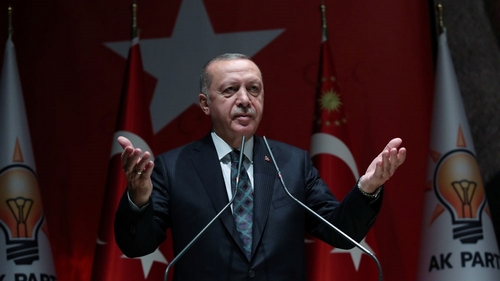 “Erdogan wanted to clear the grey areas for the international public opinion because many media outlets have been saying Turkey is about to invade or plans to invade Syria,” she continued. “Today Erdogan made it clear that this is not an invasion, and the operation is to clear the area from what Ankara calls terrorist groups.”

The Turkish president defended Turkey’s incursion into Syria after a wave of international criticism, saying the military operation would support Syria’s territorial integrity by confronting Kurdish control of the country’s northeast.

“They are not honest, they just make up words,” Erdogan said of Turkey’s critics, singling out Saudi Arabia and Egypt. “We, however, create action and that is our difference,” he told members of his AK Party in Ankara.

Russia will push for Turkey-Syria ‘dialogue’ on Kurds: Lavrov

“We will strive for the necessity of dialogue between Turkey and Syria,” he said.

Turkey has “legitimate concerns about the safety of its borders” but had not been able to properly raise them with Damascus as this was “made difficult by the actions of the Americans and the coalition” east of the Euphrates river, he said.

Iran called for an immediate halt to Turkey’s offensive on Kurdish-ruled northeastern Syria, citing concern for the dangers to civilians in the conflict zone.

“Iran… emphasises (the need for) an immediate halt to the assault and the departure of Turkish military units from Syrian territory,” the foreign ministry said in a statement.

Iran is a close ally of the Syrian government, which has sought to exploit the Turkish offensive against Kurdish forces that were the mainstay of the US-led campaign against ISIL in Syria to win the region back to central government control.

Turkey’s offensive against Kurdish forces in Syria is “unacceptable”, Italian Foreign Minister Luigi Di Maio said on Thursday, calling for an immediate end to the fighting.

“As a government we think that the Turkish offensive initiative is unacceptable. We condemn it… because military action in the past has always led to more terrorism,” Di Maio, who is head of the co-ruling 5-Star Movement, said on the sidelines of a conference in Rome.

“We call for an immediate end to this offensive which is absolutely not acceptable given that the use of force continues to endanger the life of the Syrian people, who have already experienced tragedy in recent years,” he said.

Turkey-backed Syrian rebel fighters are on their way to battle fronts in northeastern Syria in support of Turkish troops who have crossed the countries’ border, a spokesman for the rebels said on Thursday.

The fighters of the Syrian opposition National Army are moving towards the two main towns in the area, Tel Abyad and Ras al-Ain, he said.

Heavy clashes are under way in Syrian border villages between advancing Turkish forces and Syrian Democratic Forces (SDF) soldiers, an official in the Kurdish-led SDF said on Thursday.

“Fierce clashes are continuing in the villages that (Turkish forces) are trying to enter,” said Marvan Qamishlo, an SDF media official.

The Kurdish-led administration in northern Syria accused Turkey of shelling a prison holding ISIL fighters of more than 60 nationalities, calling this “a clear attempt” to help them escape.

The shelling on Wednesday night targeted part of Chirkin prison in the city of Qamishli, the Kurdish-led authorities said in a statement.

A Kurdish-led group and Syrian activists claimed that despite the heavy barrage, Turkish troops had not made much progress on several fronts they had opened over the past hours.

But their claims could not be independently verified and the situation on the ground was difficult to assess.

Al Jazeera’s Zeina Khodr said the Turkish military is using air raids as well as artillery bombardment to target the defences of the Kurdish-led Syrian Democratic Forces (SDF), mainly along the border.

“We still don’t know how much of an advance Turkish soldiers and their local allies – the opposition Free Syrian Army – have made, but according to officials and defence ministry sources, the operation is moving ahead smoothly,” Khodr said, speaking from the Turkish border town of Akcakale.

The SDF, Khodr explained, are out-numbered and out-gunned, and the flat terrain will make it easy for the Turkish army to advance. The first phase of the operation is concentrated on the 100-kilometre stretch of territory between two Syrian border towns: Tal Abyad and Ras al-Ain.

Turkey’s Defence Ministry shared a brief video of its commandos in action, and said Turkish jets and artillery had struck 181 targets east of the Euphrates River in Syria since the operation began.

No go-ahead on Turkish operation: Pompeo

US Secretary of State Mike Pompeo said Washington did not give Ankara “a green light” for a military offensive into Syria.

“That’s just false,” he said in an interview with PBS channel, but did not elaborate other than to say that Turkey has a “legitimate security concern”.

“They have a terrorist threat to their south,” Pompeo said. “We’ve been working to make sure that we did what we could do to prevent that terror threat from striking the people in Turkey while trying to achieve what is in America’s best interest: the threat from radical Islamic terrorism emanating from Syria.”

Pompeo said the US was leaving Syria because it had achieved its goal of eliminating ISIL’s control of the territory, which the SDF had played an instrumental part in.

“We’ll continue to be in a position to do what we need to do to keep the American people as safe as we possibly can from this threat,” he said.

The Turkish lira was steady against the dollar early on Thursday after Turkish troops and their Syrian rebel allies launched a ground operation against a Kurdish militia in northeast Syria overnight.

The lira was little changed at 04:21 GMT compared with a day earlier when it closed at 5.8679. It had weakened 0.5 percent on Wednesday when the operation began with air raids.

US Air Force Major Jason Baker – who flew combat missions and provided support to Kurdish-led ground forces in the fight against ISIL in 2016 – wrote in an opinion piece in USA Today that the SDF was crucial in defeating the armed group in northern Syria.

“The Kurds have proved time and again their capability as a disciplined, effective fighting force and their commitment to the kind of stable, moderate governance that is sorely lacking in the region … The US administration’s plan of abandoning them now would not just be a reversal of long-established policy, it also would be a betrayal of one of America’s few reliable regional partners.”

Australian Prime Minister Scott Morrison said on Thursday he had been in contact with the Turkish and US governments overnight, but admitted to being worried about the situation in Syria following Ankara’s announcement of a military operation.

“We are very concerned about what this could potentially mean for the Kurdish people,” he said.

“We’re concerned about what this could mean for the potential for the resurgence of Daesh,” he added, using the Arabic acronym for ISIL.