Turkey launched the cross-border assault on Kurdish fighters last Wednesday after Trump withdrew some US troops from the region, drawing sharp criticism from fellow Republicans who accused him of abandoning allies who had fought against Islamic State of Iraq and the Levant (ISIL or ISIS).

US President Donald Trump on Monday imposed sanctions on Turkey over Ankara’s military operation in northeast Syria, and called for an immediate ceasefire.

Trump said he would send Vice President Mike Pence and national security adviser Robert O’Brien to Ankara as soon as possible in an attempt to begin negotiations.

“President Trump communicated to him very clearly that the United States of America wants Turkey to stop the invasion, implement an immediate ceasefire and to begin to negotiate with Kurdish forces in Syria to bring an end to the violence,” Pence said.

The sanctions apply to individuals, entities or associates of the Turkish government involved in “actions that endanger civilians or lead to the further deterioration of peace, security and stability in northeast Syria”, US Secretary of State Mike Pompeo said in a statement.

In his sanctions announcement, Trump said he was halting negotiations on a $100 billion trade deal with Turkey and raising steel tariffs back up to 50 percent. The president also imposed sanctions on three senior Turkish officials and Turkey’s defence and energy ministries.

In a statement announcing the move, Trump said he was “fully prepared to swiftly destroy Turkey’s economy if Turkish leaders continue down this dangerous and destructive path”.

According to the US Treasury, Turkish Minister of Defence Hulusi Akar, Interior Minister Suleyman Soylu, and Energy Minister Fatih Donmez were placed on the department’s sanctions blacklist, freezing their assets in the United States and banning US or US-related transactions with them.

“I have been perfectly clear with Turkish President Recep Tayyip Erdogan: Turkey’s action is precipitating a humanitarian crisis and setting conditions for possible war crimes,” Trump added in his statement.

“Turkey must ensure the safety of civilians, including religous and ethnic minorities, and is now, or may be in the future, responsible for the ongoing detention of ISIS terrorists in the region.”

Treasury Secretary Steven Mnuchin said the sanctions would hurt an already weak Turkish economy and Pence warned the US would continue to ramp up the sanctions unless Turkey “was willing to embrace a ceasefire, come to the negotiating table and end the violence.”

American troops consolidated their positions in northern Syria on Monday and prepared to evacuate equipment in advance of a full withdrawal, a US defence official said.

The official, who was not authorised to be quoted by name, said US officials were weighing options for a potential future campaign to counter ISIL, including the possibility of a combination of air power and special operations forces based outside Syria, perhaps in Iraq.

US Secretary of Defense Mark Esper said on Sunday that the withdrawal would be done carefully to protect the troops and ensure that no US equipment was left behind. He declined to say how long that might take.

Bulent Alireza, a Director and Senior Associate at the Turkey Project of the Center for Strategic and International Studies in Washington, told Al Jazeera that the latest Trump moves were “almost embarrassing to watch” and that Pence’s planned trip to Ankara was a “mission impossible”.

“The Turks will react with scorn,” he said. “It’s a total misunderstanding of the Turkish psyche.”

In Washington, politicians have been increasing the pressure on the administration to take action over Turkey’s military operation, now in its sixth day.

Withdrawing US forces from Syria “would re-create the very conditions that we have worked hard to destroy and invite the resurgence of ISIS,” he said in a statement.

“Such a withdrawal would also create a broader power vacuum in Syria that will be exploited by Iran and Russia, a catastrophic outcome for the United States’ strategic interests.”

Erdogan has said the offensive is aimed at removing Kurdish-led forces from the border area and creating a “safe zone” to which millions of Syrian refugees can be returned.

Trump reiterated he would pull the remaining US troops out of Syria, apart from a small group in the southern part of the country, and said they would be redeployed elsewhere in the region to monitor the situation.

Republican Lindsey Graham, who is usually a Trump supporter,  said late on Monday that he “strongly” supported Trump’s sanctions, adding that he intended to “give them reasonable time and space to achieve our mutual goals”.

Last week, Graham said he was planning on introducing a bill with Democratic Senator Chris Van Hollen that would impose sanctions on the Turkish military. 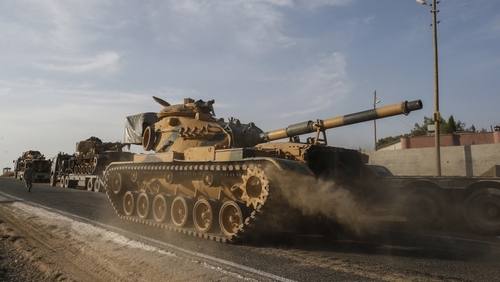 A Turkish forces tank is driven to its new position after was transported by trucks, on a road towards the border with Syria in Sanliurfa province, Turkey Emrah Gurel/AP Photo

Another top Republican, Representative Mike McCaul, said, however, that the sanctions announced on Monday were insufficient.

“We appreciate the administration’s planned sanctions, but it does not go far enough to punish Turkey for it egregious offences in Syria,” McCaul’s office said in a statement.

A statement from Senate Democratic leader Chuck Schumer and Democratic Senators Robert Menendez and Jack Reed said the only person who is able to “immediately stop this tragedy unfolding is the president himself.”

“The first step when Congress returns to session this week is for Republicans to join with us in passing a resolution making clear that both parties are demanding the president’s decision be reversed,” they said.

Esper said on Monday that he would ask NATO allies to take “collective and individual diplomatic and economic measures in response to these egregious Turkish actions”.

Meanwhile in Syria, Turkish-backed rebel Syrian forces launched an operation to seize the strategic city of Manbij from Kurdish forces.

Monday’s drive came as Syrian government troops started moving towards the country’s border with Turkey after Damascus forged an agreement with the Kurdish-led Syrian Democratic Forces (SDF) to fend off Ankara, in a Russia-brokered deal that once again re-shaped alliances in Syria’s multi-layered conflict.

The agreement with the Syrian government marked a major reversal for the Kurdish forces, a long-time ally of the US that was now seen as moving closer to Iran and Russia, Syrian President Bashar al-Assad’s main military backers. 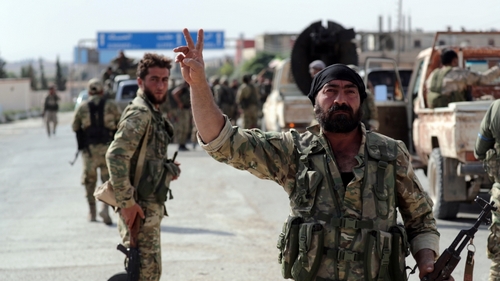 A Turkey-backed Syrian rebel fighter gestures to the camera at the border town of Tel Abyad, Syria Khalil Ashawi/Reuters

The return of Syrian government forces to the region – where the SDF has sought to create an autonomous federation – could further cement al-Assad’s hold over the country, and raise the risk of a direct clash confrontation between forces loyal to him and Turkish-led troops.

“For the first time since 2013, the government (of Syria) is back in the northeast,” Al Jazeera’s Zeina Khodr said from Sanliurfa on the Turkey-Syria border. “They came in. There was no fight. They were invited.”

Khodr said that while the situation on the ground was dangerous, negotiations were going on behind the scenes.

Erdogan, meanwhile, played down suggestions that his troops and allies would go to war with Russian-supported Syrian government forces, citing on Monday Moscow’s “positive approach”.

He added, however, that Turkey’s operation against Kurdish forces would intensify, naming Manbij as the next target of the offensive.

How long will Turkey remain in northeast Syria?