Soon after Turkish troops launched the cross-border operation on October 9 – aiming to “eliminate” Kurdish fighters it considers “terrorists” from the region – European members of the United Nations Security Council called for an immediate cessation of hostilities. In a joint statement, they said Ankara’s actions could destablise the Middle East and displace even more people.

European powers have moved quickly to censure Turkey over its long-threatened military offensive in northeast Syria.

The condemnation was followed swiftly by bans on arms sales to Turkey.

Europe’s top weapons exporters – France, Germany, United Kingdom, Spain and Italy – all said they would halt the export of arms that Turkey could use in its military operation in Syria.

The swift response on Turkey stands in stark contrast to the resistance most of them showed this time last year, when human rights groups had called for similar penalties against Saudi Arabia over the killing of Jamal Khashoggi.

The journalist’s murder on October 2, 2018 – carried out by Saudi agents inside the kingdom’s consulate in Istanbul – shocked the world and prompted renewed scrutiny over Riyadh’s actions in Yemen, where a Saudi-led coalition has waged a years-long campaign against Houthi rebels.

That conflict has killed tens of thousands of people and pushed the Arab world’s most impoverished country to the brink of famine.

As the outcry over Khashoggi intensified, Germany responded with a six-month long arms ban on Saudi Arabia, but the other four countries continued to ignore calls for action.

France and Britain, in fact, criticised Berlin after it extended the arms ban earlier this year, with London expressing “grave concerns” about the effect the freeze was having on the supply chains of the European defence industry.

The UK was ultimately forced to suspend weapon sales to Riyadh in June when an appeals court said it had broken the law by allowing arms exports that might have been used in Yemen’s war. The British government, however, plans to appeal the ruling.

France, Spain and Italy refused to follow suit. That’s despite a recent United Nations report saying countries that sell arms to Riyadh may be complicit in war crimes in Yemen.

“When you compare Turkey to Saudi Arabia, we see an element of hypocrisy in the position of European and other Western countries,” said Marwan Kabalan, Director of Policy Analysis at the Arab Center for Research and Policy Studies in Doha.

“This is because countries are less concerned about principles or consistency when it comes to foreign policy. They are mainly seeking their own interests.”

The “double-standard” in policy towards Ankara and Riyadh, according to Kabalan, mainly comes down to the volume of weapons each country imports.

Saudi Arabia is the world’s top arms importer and spent $16.9bn buying weapons in the period between 2014 and 2018, according to the Stockholm International Peace Research Institute (SIPRI), a defence think-tank. At least $4.9bn of that amount was spent on European arms.

In contrast, Turkey spent $3.4bn on weapons imports in the same period, SIPRI said, half of which went to European countries. 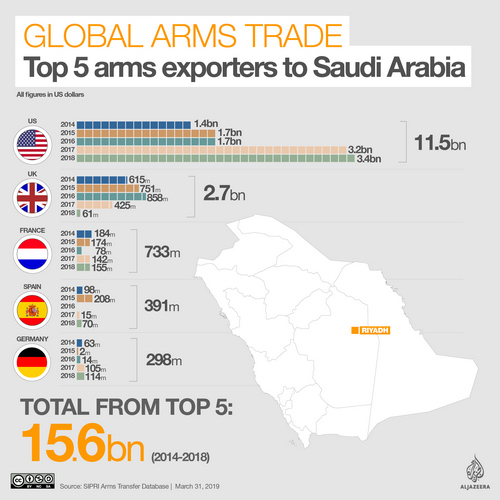 “So it is more difficult for them economically to take that step,” he said, noting the European move against Turkey was “not a blanket ban on all military materials” as it only applied to items that could be used in Ankara’s ongoing cross-border operation.

The measure is further weakened, said Andrew Smith, spokesman for the UK-based Campaign Against Arms Trade, as it did not apply to Europe’s existing defence contracts with Turkey.

“This is largely symbolic and is unlikely to make any difference militarily,” he said.

Indeed, the move appears to have done little to deter Ankara.

Turkish President Recep Tayyip Erdogan has promised to continue with the offensive in Syria until the Kurdish fighters laid down their arms.

“Those who think they can make Turkey turn back with these threats are gravely mistaken,” he said on Monday, referring to the weapons bans.

In an editorial on the same day, the pro-government Daily Sabah newspaper said the European moves “have no impact or is very limited on the defence capabilities and inventories of the Turkish military”.

Turkey produces 70 percent of the arms it needs, the newspaper said, and the development of “homegrown air, land and marine platforms has secured Turkey’s success in anti-terror operations both at home and abroad … without relying on imported defence products”.

The desire for self-sufficiency in defence, according to Daily Sabah, was driven by a US arms embargo against Ankara in 1974 when Turkish troops seized the northern third of Cyprus in response to a Athens-inspired Greek Cypriot coup seeking union with Greece.

Under Erdogan, Turkey’s defence exports have boomed, according to figures published by SIPRI.

Ankara’s arms sales have increased by 170 percent in the last four years, with its top buyers being the United Arab Emirates, Turkmenistan and Saudi Arabia.

Despite the allegations of double standards in Europe’s policies on arms exports, the Centre for Economics and Foreign Policy Studies’ Ulgen said there were important differences in Europe’s considerations when it came to Syria and Yemen.

Europe’s main concern over Syria, he said, was that the renewed fighting could revive the Islamic State of Iraq and the Levant (ISIL, or ISIS) and result in those displaced trying to seek refuge in Europe, as they did in 2015.

“Yemen is too far away for Europe as well as the US, in terms of their security landscapes. Syria is much closer,” he said.

“The fight against the Islamic State, the refugee issue – all of these things has a much bigger bearing for those countries, also in terms of their domestic politics.”

Russia and Turkey: Partners or opponents in Syria?