Speaking to reporters in Istanbul, Erdogan said the Kurdish forces must withdraw “without exception” from a swathe of land 30km (18.6 miles) deep inside Syria, running 440km (273.4 miles) along Turkey’s eastern border with Syria.

The ceasefire in northeast Syria got off to a rocky start on Friday, as Turkish President Recep Tayyip Erdogan warned he would resume a full-scale operation against Kurdish forces if they do not withdraw from a border “safe zone”.

“If the promises are kept until Tuesday evening, the safe zone issue will be resolved,” Erdogan said.

“If it fails, the operation… will start the minute 120 hours are over.”

Ankara considers the Kurdish forces to be “terrorists” linked to Kurdish rebels inside Turkey and wants the fighters pushed back from its border. It says the “safe zone” it wants to create inside Syria would also make room to settle up to two million Syrian war refugees – out of the 3.6 million it is currently hosting.

Donald Trump, president of the United States, meanwhile, said Erdogan told him there had been “minor sniper and mortar fire” in the region “that was quickly eliminated”.

The Turkish leader assured him in a call that “he very much wants the ceasefire, or pause, to work”, Trump said on Twitter, adding that the Kurdish-led Syrian Democratic Forces (SDF) also want the deal to work. 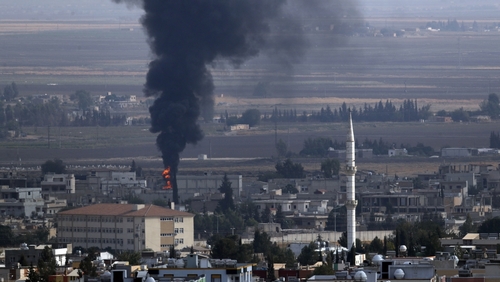 In this photo taken from the Turkish side of the border between Turkey and Syria, in Ceylanpinar, Sanliurfa province, southeastern Turkey, smoke billows from a fire in Ras al-Ain, Syria, Friday, October 18, 2019. Lefteris Pitarakis/AP

There was no sign of any pullout by the Kurdish-led forces, however.

In a statement, the SDF said the deal only covers a 12km stretch (7.5 miles) – a much smaller section of the border than that Erdogan announced – and did not commit to pulling out from anywhere.

Columns of smoke were seen over the border town on Friday morning, and the UK-based Syrian Observatory for Human Rights and the Rojava Information Center said fighting continued into the afternoon as Turkish-backed Syrian fighters clashed with Kurdish forces in villages on the town’s outskirts.

Earlier in the day, Mustefa Bali, a spokesman for the SDF, accused Turkey of violating the ceasefire deal reached during a visit to Ankara by US Vice President Mike Pence on Thursday.

“Despite the agreement to halt the fighting, air and artillery attacks continue to target the positions of fighters, civilian settlements and the hospital” in the border town of Ras al-Ain in northeast Syria, he said.

The United Nations Office for the Coordination of Humanitarian Affairs described the situation in northeast Syria as “reportedly calm in most areas, with the exception of Ras al-Ain, where shelling and gunfire continued to be reported” earlier on Friday.

The ceasefire, brokered by Washington, was aimed at easing a crisis that saw Trump order a hasty and unexpected US retreat, which his critics say amounted to abandoning Kurdish fighters who fought alongside US troops to defeat the Islamic State of Iraq and the Levant (ISIL or ISIS).

It also prompted a security alert over thousands of ISIL fighters held in Kurdish jails.

Biometric Identifies You in a Heartbeat

Mark Esper, US defence secretary, said on Friday that “no US ground forces will participate in the enforcement of the safe zone.

“However, we will remain in communication with both Turkey and the SDF,” he said, adding that the US was continuing its “deliberate withdrawal from northeastern Syria”, he told reporters.

After the US decision to pull its 1,000-strong contingent from Syria, the Kurds agreed with Russia to allow Syrian President Bashar al-Assad’s forces to deploy along the border with Turkey to halt Ankara’s offensive.

Erdogan is to meet Russian President Vladimir Putin in Sochi, Russia, on Tuesday, the day the halt in fighting runs out. Moscow and Iran are Assad’s main military allies.

Donald Tusk, president of the EU council, said it was “not a ceasefire, it is a demand for the capitulation of the Kurds” and called on Turkey to immediately halt its operation in northeast Syria.

In Washington, US senators who have criticised the Trump administration for failing to prevent the Turkish assault in the first place said they would press ahead with legislation to impose sanctions against Turkey, a NATO ally.

How long will Turkey remain in northeast Syria?