Donald Trump has hailed his decision to withdraw US troops in Syria, paving way for a Turkish offensive, as “strategically brilliant”, declaring that the Kurds he had abandoned were “much safer now” and were anyway “not angels”. 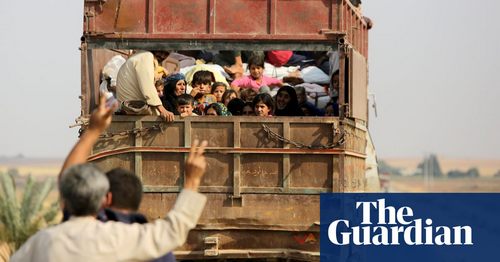 The president’s remarks contradicted the official assessment of both the state and defence departments that the Turkish offensive was a disaster for regional stability and the fight against Isis.

It also undercut a mission to Ankara by the US vice-president, Mike Pence, and the secretary of state, Mike Pompeo, aimed at persuading Turkey’s president, Recep Tayyip Erdoğan, to halt the offensive or face US sanctions.

Erdoğan insisted on Wednesday that he would “never declare a ceasefire” and his spokesman, Ibrahim Kalin, said Turkey was preparing retaliatory sanctions against the US. Kalin said that Ankara had told the US administration it would not stop the offensive, and would not negotiate with Kurdish forces.

At one point on Wednesday, the Turkish president suggested he would not even see Pence and Pompeo, but his communications director later confirmed the meeting would go ahead.

Erdoğan launched the offensive a week ago to create a 30km-deep buffer zone between Turkey and territory held by the US-backed Syrian Democratic Forces (SDF), a group that Ankara regards as proxies for the Kurdistan Workers party (PKK) that has waged a 35-year insurgency against the Turkish state.

Pompeo said he would be telling the Turkish president: “He needs to stop the incursion into Syria.”

“We need them to stand down, we need a ceasefire, at which point we can begin to put this all back together again,” Pompeo told Fox Business Network.

However, US efforts to restore some leverage in the region in the wake of the hasty retreat of its troops from the Turkish-Syrian border were dramatically undermined by the president’s comments on Wednesday, during a visit by the Italian president, Sergio Mattarella.

“I view the situation on the Turkish border with Syria to be, for the United States, strategically brilliant,” Trump said. “Our soldiers are out of there, they’re totally safe.”

The claim was untrue. There are reported to be hundreds of US troops still in the border area, where they have come under fire from Turkish-backed forces. US commanders were quoted by Fox News as describing their extraction as “extremely dangerous”. The president seemed unaware or in denial of the precarious and volatile situation in the region for US troops and the Kurdish inhabitants.

As for the Kurds, Trump showed no remorse for abandoning local partners who had lost 11,000 soldiers fighting under US direction against Isis.

“Our soldiers are not in harm’s way, as they shouldn’t be as two countries fight over land. That has nothing to do with us,” Trump said. “The Kurds are much safer right now, but the Kurds know how to fight. And as I said they’re not angels, they’re not angels.

At one point, the US president declared the Kurdish insurgents in Turkey (the PKK), strongly linked to Kurdish forces in Syria, were “more of a terrorist threat than Isis”. His remarks closely mirrored Ankara’s talking points, but were starkly at odds with US intelligence and defence assessments which identify Isis as a direct threat to US security.

The president insisted that the US had no business being in the region.

Trump had no words of criticism for Erdoğan or the Turkish military, despite the fact that the administration imposed sanctions on Monday, aimed at forcing an end to the offensive. Those sanctions have been criticised as toothless by members of Congress, who are preparing their own sanctions package.

The Republican senator Lindsey Graham, normally a staunch Trump ally said on Twitter: “I firmly believe that if President Trump continues to make such statements this will be a disaster worse than President Obama’s decision to leave Iraq.”

“I fear this is a complete and utter national security disaster in the making and I hope President Trump will adjust his thinking,” Senator Graham said.

Pompeo insisted that “the world has underappreciated the severity of those sanctions and how much impact they will ultimately have on the Turkish economy”.

“But our goal here isn’t to break the relationship with Turkey. They are a member of Nato. We have important security interests connected to Turkey,” the secretary of state added. “It is to deny Turkey the capacity to continue to engage in this behaviour.”

The Turkish campaign against Kurdish fighters has strengthened Moscow’s hand in the region and signalled the diminishinginfluence of the US.

A day after the US withdrew much of its 1,000-strong force in north-eastern Syria, Russian and Syrian soldiers were inside the city of Manbij, with both countries’ flags seen flying from some government buildings and military convoys.

The Kremlin said it plans to host the Turkish leader in the coming days to discuss hostilities between Turkey and Syria. The Russian military is patrolling between the two countries’ forces to prevent an escalation.

Fighting between Kurdish forces and Turkey and its allies continued in the border city of Ras al-Ayn.

Turkey claims it has captured the city, but the Syrian Observatory for Human Rights said Kurdish fighters had launched “a large counter-attack” on Tuesday and reported “fierce combat” in the west of the town as well as in another city, Tel Abyad.

The French foreign minister, Jean-Yves Le Drian, said on Wednesday that camps where about 11,000 Islamic State fighters were being detained were not currently under threat from the Turkish onslaught.

Turkey also wants to destroy Kurdish hopes of an autonomous state that could serve as a launching pad for attacks in the country, as well as resettle at least 1 million of the Syrian refugees Ankara is hosting.

The mostly Kurdish SDF partnered with the US in 2015 to clear north-eastern Syria of Isis fighters and successfully liberated Baghuz, the last city under the militant group’s control, earlier this year.