Akcakale, Turkey – On one side, the concrete border wall topped with barbed wire winds down the street, its faded white painted facade relatively free from graffiti. However, opposite the section where “Neymar” – after the Brazilian football player – is sprayed on the wall, a number of Syrian refugee children spill out from the empty storefronts that are their homes.

One such store is home to Abu Madyan and his wife, Hurriyeh, who fled Syria’s Tal Abyad five years ago when a Kurdish militia invaded the Arab majority town.

“I can see my house in Tal Abyad from the rooftop of the store I am living in,” he said, tears welling up in his eyes. “Imagine seeing your house and not being able to go home.”

But the 37-year-old may have to wait awhile.

Turkish President Recep Tayyip Erdogan said the zone would stretch 440km along the Turkey-Syria border and run 30km deep into Syrian territory. He said it would allow the return of atleast two million of the 3.6million Syrian refugees Turkey currently hosts on its soil.

But the military action drew global concern, with aid groups sounding the alarm over a new humanitarian crisis as more than 200,000 people took flight from the Kurdish-controlled border region.

European countries, meanwhile, warned the fighting could revive the Islamic State of Iraq and the Levant (ISIS, or ISIL), which was defeated in Syria in March by the United States-backed YPG-led Syrian Democratic Forces (SDF).

As international criticism of the operation mounted, Erdogan on Thursday agreed to a five-day pause in fighting to allow the SDF to withdraw from the “safe-zone”. Two days later, the truce appeared to be largely holding, despite continued fighting between Kurdish forces and Turkey-backed Syrian rebels in the border town of Ras al-Ain.

The SDF has pledged to abide by the ceasefire deal, but its forces are yet to withdraw from the border region, however.

There was disagreement over the length of the “safe-zone”, with SDF saying it only covered a 120km stretch between the towns of Tal Abyad and Ras al-Ain. On Saturday, Erdogan issued a stern warning, saying Turkey will “crush the heads” of Kurdish fighters if they fail to pull back from the “safe-zone”.

Darwish Khalifa, a writer from Tal Abyad, said Turkey was adamant in implementing the safe zone, which it has been calling for since the end of 2012.

“The battle of Aleppo at that time resulted in huge numbers of Syrian refugees entering Turkey’s border,” he said. “Turkey wants to secure its frontier, and Erdogan has clearly stated that if the YPG does not withdraw from the territory, then Turkey will continue its offensive, for internal and external reasons.” 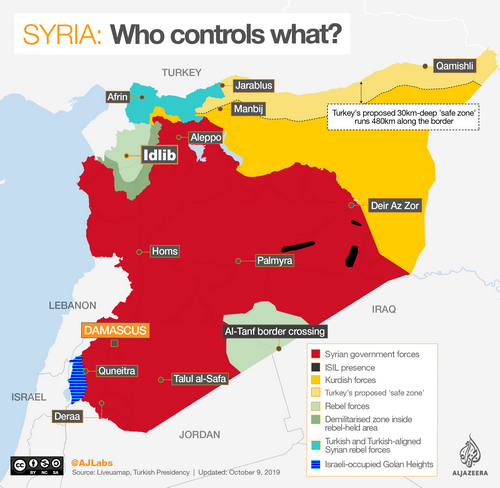 On the domestic front, Darwish explained, the ruling AK Party, which lost some major cities to the opposition in recent municipal elections, wants to appease rising discontent by pointing to the fact that Turkey is battling on several fronts in Syria to keep its borders secure.

“Ankara is also serious about returning a good chunk of the Syrian refugees it currently hosts,” he said. “The presence of the refugees has created friction with Turkish society especially on the economical aspect.”

Turkish citizens will vote for a party that is able to guarantee them social and financial benefits and security, he added.

On the external front, “Turkey’s strong presence in northeast Syria – especially east of the Euphrates River, which is rich in natural resources and is the breadbasket for the country, will buy it leverage in the international area,” he said. The influence will give Turkey an increased say in Syria’s domestic politics, he said, noting Ankara’s role in choosing opposition members for Syria’s constitutional committee, which the United Nations hopes will come up with a political solution to end the country’s eight-year-war.

Turkey will maintain its presence in Syrian territory until the country becomes “an independent, unified country with a legitimate government”, said Darwish.

“This can only happen if all parties involved in the Syrian conflict adhere to UN Resolution 2254, which calls for a Syrian-led political transition that can draft a new constitution and hold elections under UN supervision,” he said. 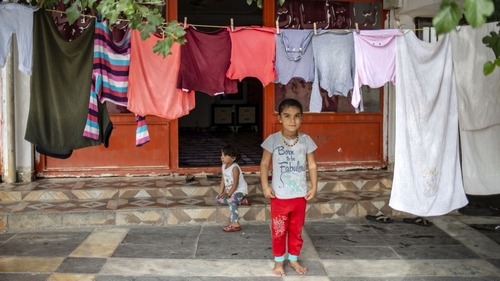 Critics of Turkey’s operation accuse Ankara of trying to change the demography of northeast Syria at the expense of Syrian-Kurds.

“The Syrian-Kurdish territories have been subjected to ethnic cleansing and demographic change for decades, since the Baath regime,” said Hussein Jabali, a Syrian-Kurdish lawyer from Qamishli, who now resides in Germany.

The Syrian government has never conducted a census based on ethnic or religious groups, Jabali said.

“So even though Tal Abyad and Ras al-Ain are predominantly populated by Syrian Arabs, the strip of land between them, those 120 kilometres, have historically been populated by the Kurds.

“Before 2011, the number of Syrian Arabs in the area where Turkey wants to create its ‘safe zone’ did not reach two million,” he said. “That’s the number Erdogan said he wants to return, not just those who had fled their homes from the area.”

Turkey, however, has denied the claim, with Ibrahim Kalin, spokesman for Erdogan, accusing the YPG of “changing demographics east of the Euphrates by entering and invading Arab towns and villages”.

Jabali said there were still gun battles and skirmishes in northeast Syria, but not at the level of heavy military operations.

“I don’t think things will calm down,” he said. “In the long run, Turkey will remain in northeast Syria but it won’t expand its military control. It will probably resort to offering logistical support and intelligence for its allied Syrian rebels.

“As for the SDF, they will end up joining the Syrian government forces,” he said, referring to a recent alliance between the SDF and President Bashar al-Assad’s government.

This, according to Jabali, could lead to a scenario where the Syrian army and Syrian rebel fighters will face off until one of them gets defeated – a scenario that could mean many more months of fighting, and one that thwarts the hopes of those Syrians who wish to return to their homes.