American troops have begun withdrawing from northeast Syria ahead of a Turkish invasion that Kurdish fighters say will overturn the victory over the Islamic State of Iraq and the Levant (ISIL or ISIS) armed group. 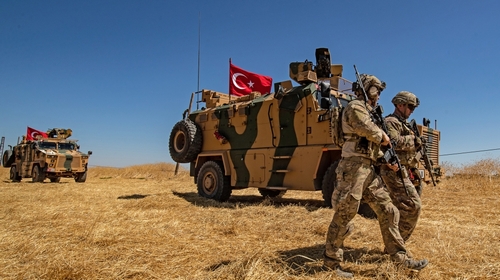 US decision was reached following a call between President Trump and President Erdogan File: Delil Souleiman/AFP

US forces “will not support or be involved in the Turkish operation” and “will no longer be in the immediate area”, White House Press Secretary Stephanie Grisham said in a statement.

It was not clear whether that meant the United States would withdraw its 1,000 or so troops completely from northern Syria.

“Turkey will soon be moving forward with its long-planned operation into northern Syria,” said the statement.

A US official told Reuters news agency American forces had on Monday evacuated two observation posts at Tel Abyad and Ras al Ain in northeast Syria, along the Turkish border. Other US troops in the region were still in position for now, the official said.

The withdrawal marks a major shift in US policy and effectively abandons an American ally in the battle against ISIL, which took over swathes of Syria before being defeated a year ago.

Turkish President Recep Tayyip Erdogan said on Monday his army was ready to launch operations against Kurdish fighters in Syria at any moment following the US announcement.

“There is a phrase that we always say: we can come any night without warning,” Erdogan told reporters in televised remarks. “It is absolutely out of the question for us to further tolerate the threats from these terrorist groups.”

Such an operation would reverse years of successful Kurdish-led operations to defeat the armed group and allow some of its surviving leaders to come out of hiding, the Syrian Democratic Forces (SDF) said in a statement.

The Kurdish-led force also denounced Washington for the pullout.

“The American forces did not fulfill their commitments and withdrew their forces from the border areas with Turkey, and Turkey is now preparing for an invasion operation of northern and eastern Syria,” the SDF said.

“The Turkish military operation in northern and eastern Syria will have a huge negative effect on our war against” ISIL, it added.

“We will not hesitate for a moment in defending our people” against Turkish troops, the Syrian-Kurdish force said, adding it has lost 11,000 fighters in the war against ISIL.

“We are determined to ensure our country’s existence and security by clearing terrorists from this region,” Cavusoglu wrote on Twitter.

“From the start of the Syria war, we have supported that country’s territorial integrity and will continue to do so from now on. We will contribute to bring serenity, peace and stability to Syria.”

The UN said Monday it was “preparing for the worst” in northeast Syria.

“We don’t know what is going to happen,” the UN’s humanitarian coordinator for Syria, Panos Moumtzis, said in Geneva, stressing there were “a lot of unanswered questions” about the consequences of the operation.

Grisham said following a call between President Donald Trump and Turkish President Recep Tayyip Erdogan, Turkey is to take custody of foreign fighters captured in the US-led campaign against ISIL, who have been held by Kurdish forces supported by the US.

France, Germany, and other European nations have refused US requests to take back nationals who fought for ISIL.

Turkey previously warned it would carry out military operations east of the Euphrates River, but put its plans on hold after agreeing with the US to create a “safe zone” inside Syria’s northeastern border with Turkey, which would be cleared of the Kurdish People’s Protection Units (YPG) armed group.

Kurdish forces bore the brunt of the ground campaign against ISIL but are considered “terrorists” by the Turkish government.

The White House statement was silent on what would happen to the Kurds.

During the phone call with Trump, Erdogan expressed his frustration with the failure of US military and security officials to implement the agreement between the two countries, the Turkish presidency said.

Ibrahim Kalin, Turkey’s presidential spokesman, said on Monday the safe zone in northern Syria had two aims: to clear “terrorist elements” from the border and to return refugees safely to Syria.

Kalin said Turkey was not after territorial gain in any country. “Turkey is powerful and determined,” he added.

Turkey is home to 3.6 million Syrian refugees. Their presence has become a political issue as the country’s economy struggles to emerge from recession.

After eight years of war in neighbouring Syria, Ankara and NATO ally Washington agreed to establish a zone along 480km (300 miles) of the border that Turkey wants to be 30km deep (19 miles).

Under the Turkish plan, up to two million Syrian refugees would be settled in the area that would be cleared of the YPG.

Turkey views the YPG as an extension of the Kurdistan Workers’ Party, or PKK, which has waged an insurgency against Turkey for 35 years. An estimated 40,000 people have been killed.

Ankara and Washington consider the PKK a “terrorist” group but they diverge on the issue of the YPG, which forms the core of US-backed Syrian forces against ISIL.

Since agreeing to set up the zone in northern Syria, Turkey has repeatedly warned of unilateral military action if efforts do not meet its expectations, saying it would not tolerate any attempts by the US to stall the process.

The ties between the allies have also been pressured over Turkey’s purchase of Russian S-400 defence missiles and the trial of local US consulate employees in Turkey.

Marwan Kabalan, from the Doha Institute of Graduate Studies, said Trump is desperate to secure any foreign policy success after failing on Afghanistan and Iran, and with fading progress on North Korea.

“In order to pullout from Syria someone else must come in and fill the vacuum there so Turkey might be that party to do that mission. We have to look at the domestic needs of President Trump on one hand, and also the pressure the Turks are putting on the Trump administration,” said Kabalan.

He said the US’ handling of Iran after the attacks on Saudi Arabia’s oil infrastructure has changed perceptions about American military power in the Middle East.

“Everybody is seeing the United States in a weak position right now since they were not willing to start any confrontation in the region,” Kablan told Al Jazeera.