Just imagine if J.K. Rowling had invented her Harry Potter universe to entertain her son, also called Harry. Imagine if she had incorporated all his childish enthusiasms into her books, such as a love of magic and the contents of his dressing-up box.

And consider how damaging it might have been for him if she had then conspired to turn little Harry into a global celebrity in his own right, forcing him to give interviews and sign autographs while he also watched his own childhood memories being sequestered by millions.

Domhnall Gleeson and Will Tilston in Goodbye Christopher Robin (2017)

There is a lot of dappled sunlight in this film. And when the sun doesn’t dapple, it streams through windows, casting a golden glow on everything it touches

Well, that’s what happened 90-odd years ago to Christopher Robin Milne, the son of Winnie-the-Pooh creator A.A. Milne. And that’s the story told in Goodbye Christopher Robin, which opens on a sun-dappled glade in what a caption tells us is Ashdown Forest in East Sussex – the inspiration for Hundred Acre Wood, home to Pooh, Piglet, Tigger, Owl, Eeyore and co.

There is a lot of dappled sunlight in this film. And when the sun doesn’t dapple, it streams through windows, casting a golden glow on everything it touches.

A.A. Milne is married to the beautiful, fun-loving Daphne (Margot Robbie, a fine Australian actress whose cut-glass English accent, alas, is somewhat chipped around the rim)

Apart from one scene in which there is snow on the ground, deep and crisp and even, the England that director Simon Curtis (My Week With Marilyn) conjures up is one of perennial summer. But the sunshine is deliberately misleading, no more reflecting a nation recovering from the horrors of World War I than it does the superficially gilded life of A.A. Milne (Domhnall Gleeson). Alan Alexander Milne is a celebrated playwright and humorist, one of the literary stars of his generation. He is married to the beautiful, fun-loving Daphne (Margot Robbie, a fine Australian actress whose cut-glass English accent, alas, is somewhat chipped around the rim).

Alan’s famous wit enlivens many a London soiree. But his experiences on the Somme have left him with what we know now as post-traumatic stress disorder.

The only person who understands what he is going through is another war veteran, his friend and illustrator E.H. (Ernest) Shepard (Stephen Campbell Moore). Even at the best of times, Alan is unable to express emotion. After his father’s death, Christopher observed that the great A.A. Milne had spent his whole life with ‘his heart buttoned up inside his chest’.

The line is not in the film, but it very much informs Gleeson’s portrayal, which never quite surmounts the difficulty of how to play stiff without giving a stiff performance.

In the mid-Twenties, with his creative juices drying up, Alan moves his wife and son (cherubically played as a child by Will Tilston and as an older boy by Alex Lawther) out of London to the Sussex countryside. He is intent on writing a powerful anti-war polemic.

‘I’ve had enough of making people laugh, I want to make them see,’ he cries, self-importantly, hardly imagining that his name would instead become synonymous with an excitable tiger, a gloomy donkey and a bear of very little brain. He and Daphne have an affectionate pet name for little Christopher – Billy Moon – but that’s pretty much where their affection stops.

Alan begins making up stories, based on the child’s cuddly toys. Christopher Robin Milne is pictured as a child

Daphne, in particular, is incorrigibly spoilt and selfish behind her perfect smile. The boy’s main source of love is his adoring nanny, Olive (Kelly Macdonald), whom he calls Nou.

Only when Nou leaves to be with her sick mother, and with Daphne also away, flightily gallivanting in London, do father and son hesitantly start to bond.

Alan begins making up stories, based on the child’s cuddly toys. Sweetly, if at times fancifully, the script by Frank Cottrell Boyce and Simon Vaughan explains the origins of some of the world’s favourite children’s characters. Winnie-the-Pooh is inspired partly by a Canadian bear in London Zoo called Wi
nnipeg, but also by Alan’s fondness for names with ‘the’ in the middle: William the Conqueror, Richard the Lionheart, Joanna the Mad.

And Pooh was originally the name he and Billy Moon gave a swan, because if it didn’t respond, they could just pretend they were saying ‘pooh’. All this is delightfully intimate and whimsically charming, but as with all the rays of sunshine, appearances are deceptive.

Following the publication of two spectacularly successful volumes of poetry, When We Were Very Young and Now We Are Six, and of two books of stories about Winnie-the-Pooh, Christopher Robin becomes the most famous boy in the world.

Sackfuls of fan mail arrive by the day. In modern parlance, everyone wants a piece of him. Of course, we are far better equipped now to understand the unsettling ramifications of such celebrity. The Milnes aren’t.

They play along with the media circus long before anyone would have called it that, exhibiting a lack of judgment that even their naivety hardly excuses.

Although a final caption reassures us that Christopher Robin found personal happiness in the end, it’s hardly surprising that he never really discovered the honey in his relationship with his parents.

So in a way this is a film, though set in an England that looks like an Art Deco museum, with a very modern message: namely, that extreme fame can be extremely corrosive. Anyone expecting a celebration of Winnie-the-Pooh and friends will be disappointed, perhaps even mildly traumatised. But it is a tale worth telling, all the same. 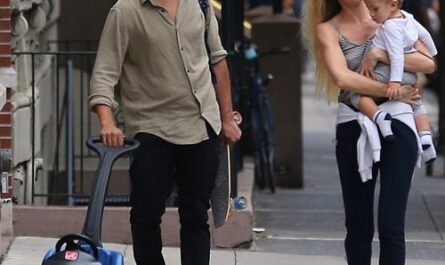 TOWIE’s Frankie Essex shows off her curves in Marbella