This debut English-language feature from Dutch writer-director Martin Koolhoven is a powerful and at times upsettingly gruesome film, a western with horror elements and a performance by Guy Pearce as a spooky preacher that will accompany you all the way home.

The film is divided into four chapters, of which the first three are told in reverse. Dakota Fanning plays Liz, a mute midwife living among religious Dutch settlers in 19th-century America. When Pearce’s preacher arrives in town, she is instantly terrified, for reasons that slowly unfold over the course of the next two and a half hours: Koolhoven is a good storyteller, but not a concise one.

The Bible-thumping reverend soon puts the fear of God into his new flock, who meekly offer him the respect he demands. Only Liz understands that he is really the personification of evil – and she can’t tell anyone.

But gradually you realise that there’s actually a very human story going on here, darker in its way than any horror film. Prostitution and even paedophilia rear their ugly heads.

Amid all this, Koolhoven gets a little over-excited with his religious imagery. There is one scene when Liz’s apparent saviour, played by Kit Harington, stands in a doorway carrying a saddle, and the brilliant sun behind him makes him look like an angel with wings.

When I first saw Brimstone at last year’s Venice Film Festival, that spectacle elicited a spontaneous round of applause. It is deft and heavy-handed at the same time, and in a sense that applies to the film as a whole.

But it works compellingly as a story of twisted hatred, retribution and survival, even if, at times, you might want to watch from behind your fingers. 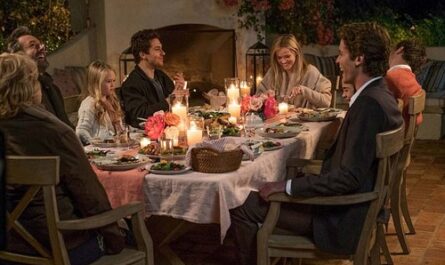 Laura Simpson puts on a leggy display in London