Most Americans know the history of the Berlin Wall as a story of triumph over division. Cold War struggle poured into concrete, dividing Western freedom and Eastern repression. 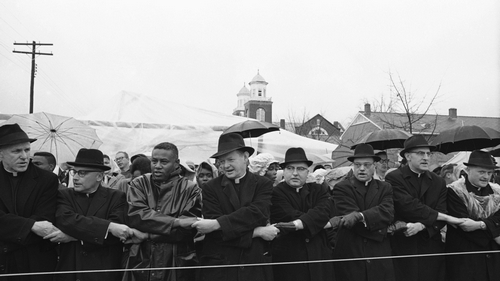 While the Wall divided Germany from 1961 to 1989, the US’s relationship with Berlin resonated through landmark declarations including President John F Kennedy’s 1963 phrase “Ich bin ein Berliner” and President Ronald Reagan’s 1987 declaration “Tear down this wall”.

Such words rang far beyond the allied American sector of West Berlin, a militarised Cold War front line and diplomatic hotspot pitted against a Soviet-supported East. Hollywood spy dramas, late-night variety shows and pop music reinforced the idea that one side of the wall was free, the other oppressed.

This week, as we reach the 30th anniversary of the wall’s dismantling, the dominant story plays out across the country in highlight reels of history and cultural programmes across the US, including “mock Berlin Wall” reenactments at high schools and universities.

But the other stories – those produced by African American activists, artists and writers who looked to divided Berlin – are also integral to the history of the Cold War. These narratives have always served a dual purpose: They challenge easy narratives of a “right” or “wrong” side of history and shed light on the founding paradox of American freedom and racism.

In an era of urgent debate and action about our own border walls and monuments, these narratives urge us to see border crises as arbitrarily constructed and that the walls we use to contain them will inevitably fall.

In the autumn of 1961, within days of the Wall’s construction, public speeches from prominent black Americans, such as State Department official Carl Rowan and NAACP president Roy Wilkins, related civil rights struggles to the construction of the Berlin Wall. African American newspapers, including the Chicago Defender and Pittsburgh Courier, published editorial cartoons and letters connecting Jim Crow segregation and the Berlin Wall.

In other instances, particular racially segregated streets were singled out and characterised for their Berlin Wall-like effect: : Peyton Road in Atlanta, Parker Street in Boston, Alameda Road in Los Angeles and South State Street in Chicago. Elsewhere, in cities such as Birmingham, Detroit, Philadelphia, Selma, St Louis, Arlington, Newark, individuals called out the specific barriers along the “colour line”, such as pernicious “common sense” boundaries that divided redlined housing districts from other residential areas or hindered mobility for black citizens.

Back then, such rhetoric boomeranged back and forth across the Atlantic, pushing white politicians to grapple with the parallels. The New York Times, for example, reported on Attorney General Robert Kennedy’s trip to divided Berlin in February 1962, a year before his brother’s visit to the city. Kennedy outlined how West and East Berlin configured into an aspirational landscape of American democracy with a caveat: “For a hundred years, despite our protestations of equality, we had, as you know, a wall of our own – a wall of segregation erected against Negroes. That wall is coming down.”

African American cultural figures contemplated the dynamics of geopolitical division and sometimes challenged existing power structures in the West. In 1964, on a state visit to West Berlin, Dr Martin Luther King passed through the border from West to East Berlin to preach at the Marienkirche. US officials had confiscated his passport, so he used his American Express Card.

When jazz legend Louis “Satchmo” Armstrong played a 1965 concert in East Berlin’s Friedrichstadt Plaza, he managed to cross the border to West Berlin without proper credentials after East German and American border guards alike recognised and embraced him as “Ambassador Satch”. In a press conference, he shared: “I ain’t worried about the wall“, disavowing the question.

Other critical Berlin stories can be found in the writings and travels of Paul Robeson, Langston Hughes, Dick Gregory, Angela Davis, Audre Lorde, Adrian Piper, Stew, and many more. The divided city of Berlin, while the Wall was up and now in the decades since, continues to be a place for Americans to grasp transnational racial justice.

The long-standing presence of African American critical and creative voices at the Wall, registered through their own observations, can also be from the two to three million African Americans (GIs, their families and civilians employed by the military) who lived in West Germany during the Cold War, as well as the experiences of Afro-German, Turkish, and other people of colour on both sides of the Wall.

By valuing their experiences, we gain additional insights into post-Holocaust Jewish trauma, the German student movement and other radical political collectivities, global sites of apartheid, and, eventually, German reunification in the face of a new-world, post-Soviet order.

Whether in the city as an expatriate or a visitor through networks of official and unofficial cultural diplomacy, being on the ground in divided Berlin offered a close-up view of the Wall’s complex geopolitics. The US did not build the Wall. But the construction of a fortified border in divided Berlin by East Germany not only bisected the city but also ran within footsteps of its occupied American sector and (symbolically, if not politically) US soil.

Generations of engaged African American artists and activists approached the Berlin Wall as a site to think through, over, and pivot towards other boundaries of freedom.

MAGA Dale is not a good guy