At some point over the last generation, even the conservatives who hate today’s civil rights came to love yesterday’s civil rights. Martin Luther King Jr was no longer a Commie revolutionary but a beloved national icon. Segregation and the Klan’s reign of terror was as obviously, stunningly immoral as Nazism.

In those quaint days of yore, an experienced politician might have steered well clear of anything that smacked of being on the wrong side of civil rights.

Until today, and until Donald Trump. You may not have known this, but Trump is himself a victim, no different from the poor souls who were publicly tortured and murdered by the Klan and its mobs. Despite his German roots, and his family’s business history of race discrimination, Trump thinks he’s suffering just as much.

“So some day, if a Democrat becomes President and the Republicans win the House, even by a tiny margin, they can impeach the President, without due process or fairness or any legal rights,” tweeted the president who has no recollection of a predecessor called Bill Clinton.

“All Republicans must remember what they are witnessing here – a lynching. But we will WIN!”

Trump is strange, but he’s not a strange fruit. And so it came to pass that the only people who can stop Trump’s conviction at his forthcoming impeachment trial were forced to spend the day talking about lynching.

To do so, you need to suspend a little reality and a lot of self-respect. You need to become a human shell that blurts out words with no meaning, that sparks thoughts with no intelligence. To wit: one Hogan Gidley, who holds the hallucinatory role of deputy press secretary in Trump’s West Wing. 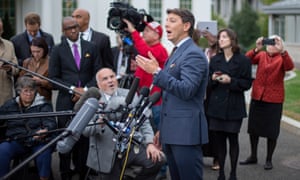 ‘“The president’s not comparing what’s happened to him with one of our darkest moments in American history. He’s just not,’ Hogan Gidley told reporters.’ Photograph: Erik S Lesser/EPA

“The president’s not comparing what’s happened to him with one of our darkest moments in American history. He’s just not,” Gidley told reporters, ignoring Exhibit A in the day’s proceedings: the president’s tweet that did just that.

“I understand there are many people in the media who don’t agree with his language. He has used many words to describe the way he has been relentlessly attacked.”

He has indeed used so many words, to such remarkable effect. Much like the hapless Hogan himself. They flow like endless rain into a paper cup.

As a defence of the president’s position, Hogan’s explanation is the equivalent of going back to bed to pull the covers over your head. There’s a reason why there are no White House press briefings any more: because you literally can’t make sense of the boss without getting fired, indicted, or shamed into permanent unemployment.

Other Republicans not employed by the White House found it easier to express what they thought. Both Mitch McConnell and Kevin McCarthy, the Republican leaders in the Senate and House, said they disagreed with Trump’s choice of words.

Adam Kinzinger, an Illinois Republican, went even further by saying that Trump should retract his comments immediately. “May God help us return to a better way,” he tweeted.

The almighty ought to be busy in Syria right now, so this unusually orange challenge rightly falls into the lap of Republicans like Kinzinger himself.

Like a fatberg blocking the sewers of Capitol Hill, Trump’s sense of victimhood and love of lying is creating unbearable pressure in a system designed to flush away an extraordinary volume of political waste material.

So Republicans were talking about Trump’s self-styled lynching instead of defending Trump from the blockbuster impeachment evidence of his current ambassador to Ukraine.

Until now, Trump has drawn what he might call a “red line in the sand” around the notion that there was no quid pro quo in Ukraine – no withholding of military aid in exchange for political dirt on the Biden family. 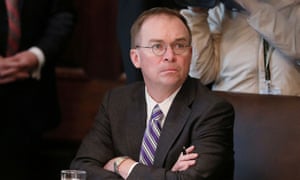 But ambassador William Taylor flatly contradicted Trump’s defence, much like his chief of staff Mick Mulvaney did last week – before Mulvaney was forced to swallow his words and regurgitate them back into the public square in an unspeakable puddle.

Never mind all that quidding and quoing now. It’s time to run for the vomitorium.

How did the party that gave the world freedom fries find itself locked in this Trump-shaped prison? The simple answer is that they built it themselves. Trump didn’t invent it; he’s not nearly enough of a very stable genius.

In the days after the 9/11 attacks, Republicans looked at the world and decided to see its enemies: an amorphous group of freedom-haters. Only Republicans could protect America from such global threats.

But in the absence of a torrent of al-Qaida insurgents at America’s borders, the party rapidly switched to protecting America from Latinos. Once you unleash the politics of fear, you create the space for your own fear-peddling president.

In memory of a literary gangster

Where you once pretended to be strong on terrorism, you now follow a president who just conspired with Turkey and Russia to revive Isis from near-death in Syria.

Where you once claimed Obamacare was an abuse of the constitution, you now support a president who claims that some part of the same founding document is phony.

Where you once claimed to defend freedom, you no longer have the freedom to speak your mind or your values. Unless you call yourself Pierre and join the cheese-eating surrender monkeys on Twitter.

Until now, Trump has assumed he can get away with murder because Republican senators will acquit him in an impeachment trial. That may be a reasonable assumption, even for someone as smart as Trump.

But there’s one thing that Republican senators value, and it’s not Trump’s leadership or his personal charm. It’s survival.

At some point, Mitch McConnell will look at the polls and his projected losses in the Senate and realise that there’s something even worse than Trump unleashing his tweetbots in a Republican primary.

For now, the GOP is clinging on to a half-baked Trumpian deal: supporting their leader in exchange for him holding his fire and fury. But nobody seriously believes that Trump can stop the projectiles that barrel out of every orifice. Never mind the quid pro quo: this status quo is untenable.