The fast-moving brush fire ignited early in the morning on Monday near the Getty Center museum, an area in the hills east of Los Angeles. The blaze, which broke out around 1:30am (8:30GMT), has since grown to consume more than 202 hectares (500 acres) of the hills surrounding a major highway, Interstate 405.

A fire in Los Angeles has forced thousands to flee their home, the most recent blaze to spark in the US state of California, where firefighters are battling over a dozen wildfires, including a mass inferno in a region known for its wine.

Commuters posted videos of slopes aglow with orange flames close to the road’s edge on Monday.

At least five homes had burned down but there were no reported injuries, Mayor Eric Garcetti told reporters at a news conference, warning that he expected the number to rise.

“This is a fire that quickly spread,” he said while urging residents in the evacuation zone, which encompasses more than 3,300 homes, to get out quickly.

Mount St Mary’s University said it evacuated 450 students from its Chalon campus near the Getty Center arts and cultural complex. The Getty was built with special fire protection features, and Los Angeles fire Captain Erik Scott said it was not threatened. 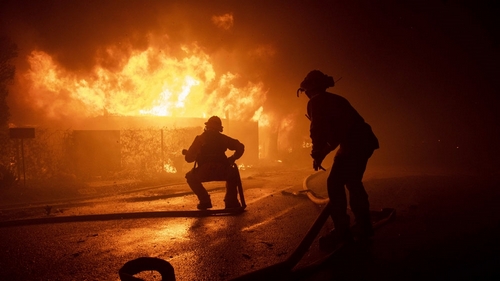 Firefighters tried to save homes after a fire broke out near Los Angeles. Christian Monterrosa/The Associated Press

Overnight, helicopters made water drops on the burning hills. They were replaced with so-called “Super Scooper” turboprop aeroplanes that scoop up water from lakes and reservoirs and drop them on the wildfires. Converted jets also unleashed loads of bright pink retardant on the flames.

Dry conditions with high winds across the state have made California a “tinderbox”, said Jonathan Cox, a spokesman for the California Department of Forestry and Fire Protection.

Of the state’s 58 counties, 43 were under warnings for high fire danger on Sunday, with flames driven by gusts that reached more than 164kph (102mph). The winds were expected to abate Monday, but were projected to pick up again later in the week.

The conditions lead Governor Gavin Newsom to declare a state of emergency over the weekend, while California’s biggest utility, Pacific Gas & Electric (PG&E), cut off power to an estimated 2.5 million people in the northern part of the state in yet another round of blackouts aimed at preventing windblown electrical equipment from sparking more fires. 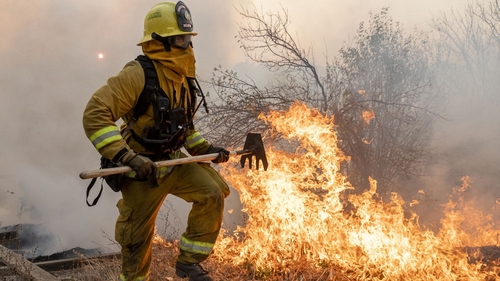 The company expects to issue a “weather all clear” for safety inspections and restoration work to begin early Monday morning for the northern Sierras and North Coast regions, the company said.

The governor has been sharply critical of PG&E, saying corporate greed and mismanagement kept it from upgrading its infrastructure while wildfire hazards have steadily worsened over the past decade.

The largest evacuations in the state were in Sonoma County, an area north of San Francisco known for its vineyards, where the Kincaid Fire, which sparked last week, has charred more than 267sq kilometres (104sq miles), destroyed 94 buildings, including 40 homes, and forced 190,000 people to evacuate. About 80,000 more structures are at risk of burning, according to authorities.

While about 3,000 people were battling the Kincade Fire, only about five percent of the blaze was contained early on Monday after crews lost ground the day before.

Two years earlier, a fire that swept through the area killed 44 people.

‘I just want to be home’

At an evacuation centre at Napa Valley College, Francisco Alvarado, 15, said he, his two younger brothers and parents decided to leave their Calistoga home in advance of evacuation orders. The family fled during the fires two years ago, as well.

“I’m pretty mad that we have to keep evacuating,” Alvardo told the Associated Press news agency. “I just want to be home. I’m trying to leave here tomorrow. I want to sleep in my bed.”

Hundreds of people had also arrived at the Sonoma County Fairgrounds in Santa Rosa, where more than 300 people slept in an auditorium filled with cots and wheeled beds. Scores of others stayed in separate buildings with their pets. 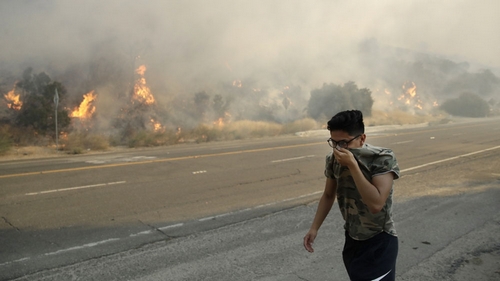 Among them was Maribel Cruz, 19, who packed up her dog, four cats and fish as soon as she was told to flee her trailer in the town of Windsor, about 100km (60 miles) north of San Francisco. She also grabbed a neighbour’s cat.

“I’m just nervous since I grew up in Windsor,” she told the Associated Press. “I’m hoping the wind cooperates.”

Investigators have not yet said what they believe caused the blaze, although it ignited near a broken wire on a PG&E transmission tower.

US House panel to vote to formalise impeachment procedures