Washington, DC – Immigrants who arrived in the United States as children protested outside of the Supreme Court on Tuesday, as justices heard oral arguments against terminating a programme that gave hundreds of thousands of young undocumented migrants job permits and protection from deportation.

On a wet and chilly morning, hundreds of recipients of the Deferred Action for Childhood Arrivals (DACA) programme and their supporters chanted, banged on drums and held signs reading “home is here”. Organisers estimated that about 200 DACA recipients rallied outside the court. Many had camped outside of the court overnight, while another group marched for days in an effort to bring attention to the case.

Gustavo, 28, a sociology graduate who works as a paralegal in New York City, said his life depended on Tuesday’s Supreme Court case.

“When I got DACA, I was able to get a job that would allow me to use my degree,” said Gustavo, who was born in Mexico and brought by his parents to the US at age 10.

“Most of us, if not all, believe that we are American in every way, except on paper. We are here, we want to be here our home is here and I believe that the Supreme Court will rule in our favour,” he told Al Jazeera.

Former President Barack Obama introduced DACA in 2012 as part of an executive action, arguing that recipients had little connection to their birth countries.

The action came after Congress failed to pass the “Dream Act”, which would have granted many undocumented young people a path to citizenship.

The DACA programme shields about 660,000 people, known as “Dreamers”, from deportation and gives them work permits. But it does not provide a pathway to citizenship and must be renewed every two years. 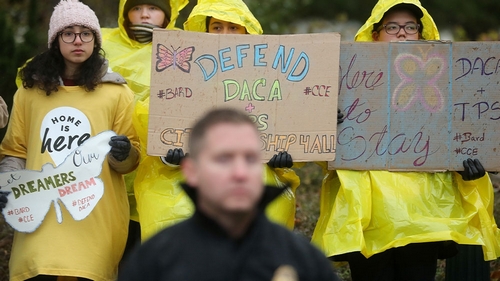 Demonstrators rallying outside the US Supreme Court as justices were scheduled to hear oral arguments in the consolidation of three cases before the court regarding the Trump administration’s bid to end the DACA programme in Washington, DC, US Jonathan Ernst/Reuters

Trump orders an end to DACA

President Donald Trump, who made a tough stance on immigration one of his core policies, moved to end DACA in 2017, arguing that it was an overreach of presidential power. Since then, no new applications to the programme have been accepted. But challenges in the lower courts have allowed people who already have the status to renew until the Supreme Court issues a final ruling.

The Supreme Court case is centred on whether the Trump administration’s approach to ending the programme complies with federal law.

A decision is not expected until June of next year, but local media reported that conservative justices appeared to favour Trump during Tuesday’s arguments. The Supreme Court has a 5-4 conservative majority and includes two judges appointed by Trump.

The US president tweeted on Tuesday that if the Supreme Court rules in his favour, a “deal will be made with the Dems for them (DACA recipients) to stay!” So far, however, repeated attempts to find a legislative solution have not led to a deal, with Democrats blaming Trump for using the young immigrants as pawns in efforts to implement stricter immigration policies.

Genesis, a DACA recipient who came from El Salvador at age seven said that although she believes that the programme has enabled her to study and work, it has also brought a great deal of uncertainty into her life.

“Being a DACA recipient has been a struggle because it is not permanent and you never know whether they’re going to take it away at any time,” she said.

“I am here because I want us to be heard,” she told Al Jazeera. 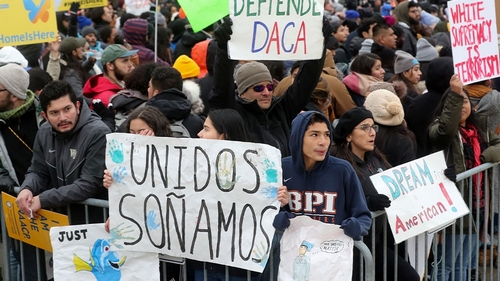 Demonstrators rallying outside the US Supreme Court  Jonathan Ernst/Reuters

In a statement on Tuesday, Ken Cuccinelli, the Trump administration’s acting director of the US Citizenship and Immigration Services agency, said that DACA is “a de facto amnesty programme for hundreds of thousands of illegal aliens”.

“If Congress wants to shield these aliens from deportation and provide them a legal status, that is its prerogative,” Cuccinelli said.

Megan Elman, an immigration lawyer who came to show her support outside the Supreme Court on Tuesday, said that recent policies have created an atmosphere of fear among migrants.

“In immigration courts across America there is truly an attack against anyone entering the immigration legal system,” Elman told Al Jazeera.

“It’s rare that you feel that an immigration judge is neutral arbiter, it often feels like a unified front between the Department of Homeland Security trial attorney and the immigration judge,” Elman said.

“There is an absolute lack of empathy right now,” she said.

Angelica and her husband, both DACA recipients, have five children who are US citizens.

“DACA gave me wings, before DACA I lived in the shadows,” she said as she proudly showed off family photos on her cellphone.

“I am here to show the face behind the story, I am as human as anyone else. I am not just a number, I am a real person and I am a part of this community.”

Editor’s note: Al Jazeera withholds surnames of undocumented immigrants who ask to only go by their first names.