UN envoy Martin Griffiths said on Tuesday all fighting sides and the international community support a United Nations peace deal brokered in Sweden last December and are making progress towards achieving it. 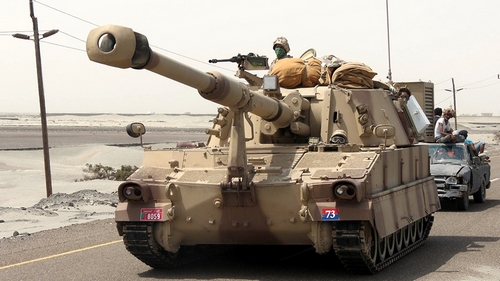 Since 2015, tens of thousands of people – mostly civilians – have been killed in the conflict Khaled Abdullah/Reuters

The war in Yemen can be stopped because the warring parties recognise a military solution is unattainable after four years of conflict and are working to pullback troops from a key port city.

“I believe that this war in Yemen is eminently resolvable,” Griffiths told reporters in Geneva.

“Both parties continue to insist that they want a political solution and the military solution is not available, they remain committed to the Stockholm agreement in all its different aspects.”

Yemen has been in the grip of a devastating power struggle between the Saudi-Emirati backed government and Iran-aligned Houthi fighters since late 2014.

The conflict has intensified since 2015 when the Houthis advanced on the ousted government’s temporary base in the city of Aden, prompting Saudi Arabia and its allies to start a military campaign against the group.

Griffiths said while the Stockholm agreement was taking some time to be implemented, both sides saw it as a gateway to opening up negotiations on a political solution, and the international community supported the deal.

Last week a meeting between the warring sides, on the neutral ground of a UN ship in the Red Sea, brought a surprise breakthrough, with agreement on technical aspects of a ceasefire deal in the flashpoint port of Hodeidah.

Griffiths said those talks had made more progress than he expected, reaching operational agreements on troop withdrawal plans under the Stockholm deal, which envisages a UN-backed team taking over management of the port as the two armies pull back.

Several issues remain unresolved, including how to handle the port’s revenue and governance, and how to handle local security forces, Griffiths said.

He said he also took heart from the movement of coalition forces out of Yemen.

Griffiths said it was a deliberate push towards a commitment to peace.

But the peace process was still vulnerable to a “detonation” such as attacks on Saudi infrastructure that could open up a regional conflict, he said, adding he was attempting to de-escalate things before they reached that point.

Meanwhile, a senior Emirati official, Anwar Gargash, said the UAE and “the rest of the coalition are not leaving Yemen”, in an opinion piece published on Monday.

The Saudis fear the Houthis will give their regional rival, Iran, a strategic foothold in the Arabian Peninsula.

The warring sides have fought to a stalemate, and several rounds of UN-sponsored talks, the last held in Sweden in December, have failed to implement any deal to end the war.

After four years of fighting, the Houthis still control much of the country, including the capital, Sanaa.

Since 2015, tens of thousands of people – mostly civilians – have been killed in the conflict.

The fighting has triggered what the United Nations describes as the world’s worst humanitarian crisis, with 3.3 million people displaced and 24.1 million – more than two-thirds of the population – in need of aid.

Gordon Sondland: ‘Was there quid pro quo? The answer is yes’