Washington, DC – Impeachment proceedings in the United States House of Representatives picked up speed this week as the full House voted to open a new phase of public hearings in the inquiry.

At the centre of the probe is whether President Donald Trump abused the power of his office and jeopardised US national security by withholding nearly $400m in US military aid from Ukraine in exchange for an investigation into his political rival.

An intelligence community officer filed a whistle-blower complaint in August that Democrats say outlined “a shadow campaign” by Trump’s personal lawyer Rudy Giuliani to side-line career US diplomats in pressuring Ukraine to open investigations of former Vice President Joe Biden and the Democrats.

So far, eight current and one former State Department officials have testified despite Secretary of State Mike Pompeo’s initial assertion they would not immediately cooperate. Three White House officials and one Defense Department official and two White House National Security Council officials have testified behind closed doors to the House impeachment inquiry. More have been scheduled for next week.

Trump has repeatedly denied he did anything wrong in the phone call with Zelenskyy and characterises the House investigation as a partisan “witch-hunt”. The White House released a summary transcript of Trump’s call with Zelenskyy that the president claims showed there was “no quid pro quo” (Latin for “favour for a favour”) in the conversation.

Here are key developments from this week.

In a major political development, the Democrat-led House passed a resolution on Thursday setting rules for public hearings in the House’s ongoing impeachment inquiry.

The resolution was approved by a 232-196 vote, largely along party lines with all but two Democrats voting in favour, and every Republican voting “no”. It is only the fourth time in US history that the House has formalised impeachment proceedings against a sitting US president.

The resolution provides that the Intelligence Committee will deliver a report of its investigation of Trump to the Judiciary Committee, which has authority under House precedents to recommend articles of impeachment to the full House. 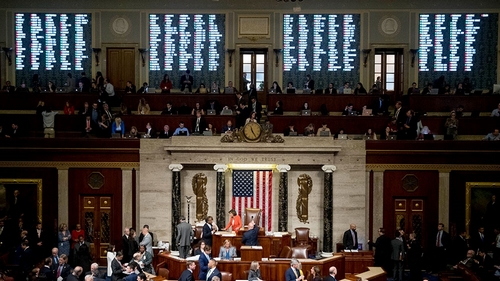 “No president, no official can demand that an ally of the United States do anything in particular to help his or her political ambitions as a condition of receiving help from our country,” said Representative Jerrold Nadler, the Democratic chairman of Judiciary.

“If after a fair and thorough inquiry, the allegations against Trump are found to be true, they would represent a profound offence against the Constitution and against the people of this country,” Nadler told reporters on Thursday.

She added that any case to impeach Trump “has to be ironclad”.

2. Focusing on substance over process

As the impeachment inquiry moves to a new phase of public hearings, Democrats say the president and his Republican defenders in the House will be forced to address the substance of the claims against him.

“Congress on a bipartisan basis allocated $391m to Ukraine in military and economic assistance because we deemed it in our national security interest,” said Representative Hakim Jeffries, a top member of the Democratic leadership team in the House.

“The United States may very well be the only thing standing between Vladimir Putin and Ukraine being completely overrun by Russia as part of his fantasy to reconstruct what he views as the glory days of the Soviet Union,” he said.

Speaking to reporters after House vote on Thursday, Keven McCarthy, the number-one Republican in the House, said “in all the hearings, there’s nothing compelling, nothing overwhelming, so the speaker should follow her own words that bipartisan vote on that floor and end the sham that has been putting the country through this nightmare.”

Appearing behind closed doors for 10 hours, Vindman provided some of the most damaging testimony to House investigators by directly rebutting Trump’s repeated claims there was no “quid pro quo” on the call.

“I was concerned by the call,” Vindman told investigators in his six-page opening statement provided to US media.

“I did not think it was proper to demand that a foreign government investigate a US citizen, and I was worried about the implications for the US government’s support of Ukraine,” Vindman said. 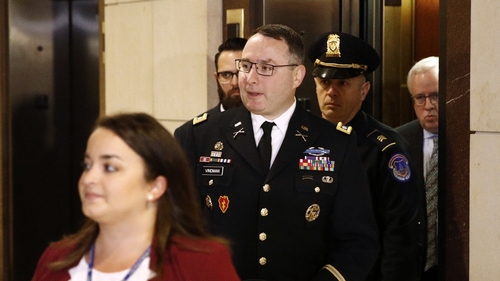 On the call, Trump asked Zelenskyy to open a state investigation into the role of Joe Biden’s son, Hunter, on the board of Burisma, a natural gas company in Ukraine.

“I realised that if Ukraine pursued an investigation into the Bidens and Burisma, it would likely be interpreted as a partisan play which would undoubtedly result in Ukraine losing the bipartisan support it has thus far maintained,” he said.

Vindman said he twice protested Trump’s handling of the Zelenskyy exchange to a senior White House lawyer, according to his prepared remarks.

During his testimony, Vindman said the White House transcript left out a specific mention of the Bidens by Trump, and Burisma by Zelenskyy that he sought to have corrected, according to reports. White House spokeswoman Stephanie Grisham disputed Vindman’s account of gaps in the transcript.

Separately, the Washington Post reported that a White House lawyer later moved the transcript of the Trump-Zelenskyy call improperly to a top-secret computer system after Vindman had raised concerns about the call within the White House.

Conservative commentators on FOX News attacked Vindman’s immigrant background – he was born in Ukraine and moved to the US at the age of three – and suggested Vindman had engaged in “espionage”.

Trump also tweeted his disregard for Vindman’s testimony, calling him a “Never Trumper”, an official who has vowed to never support Trump.

The attacks on a decorated Army officer sparked outrage in mainstream media and even pushback from leading House Republicans. Vindman had served in the infantry in Iraq where he was wounded by an IED (improvised explosive device) and was awarded a Purple Heart, one of America’s highest military honours given to soldiers injured in combat.

Vindman “is a professional, competent, patriotic and loyal officer. He has made an extraordinary contribution to the security of our nation in both peacetime and combat,” retired General Joseph Dunford, former chairman of the Joint Chiefs of Staff, told CNN.

Trump’s former National Security Adviser John Bolton and two top White House lawyers were asked by House investigators to testify next week. Democrats want to question Bolton about Giuliani’s role in the US’s dealings in Ukraine, which Bolton is said to have opposed. Democrats also summoned White House lawyer John Eisenberg and his deputy Michael Ellis, who was special adviser to the president, on Monday.

It is unclear whether Bolton will appear on Thursday as requested. His lawyer Charles Cooper told the Associated Press his client would not agree to testify voluntarily and would not appear without a subpoena. Bolton was pushed out of his top White House job by Trump in September. 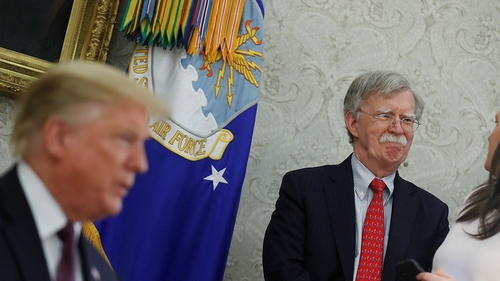 Bolton listens during a meeting with South Korean President Moon Jae-in in the Oval Office of the White House File: Oliver Contreras/EPA

Charles Kupperman, who was a deputy to Bolton, failed to appear for a scheduled deposition on Monday. Instead, Kupperman who is also represented by Cooper, went to federal court seeking a judicial ruling whether he should comply with a House subpoena over White House assertions of “immunity from congressional process”.

“This is deeply regrettable,” Schiff said after Kupperman’s no-show. “A private citizen cannot sue the Congress to try to avoid coming in when they are served with a lawful subpoena.”

This week, Timothy Morrison, a former Republican congressional staffer and a top adviser on Russia to Bolton, confirmed acting Ukraine Ambassador William Taylor’s earlier testimony that US military aid to Ukraine had held up by the president.

Morrison told investigators he had a “sinking feeling” when he learned that Trump was asking the Ukrainians to publicly announce an investigation of Biden and the Democrats, according to the Associated Press.

Morrison said he would be leaving his NSC job soon but that it was for reasons unrelated to his decision to testify.

Anderson told investigators, that through June and July, while military aid was being held up by Trump, the Ukrainians were very focused on securing a White House visit for Zelenskyy, “seeing such a visit as a critical step in empowering Zelenskyy in his negotiations with the Russians,” according to Anderson’s prepared testimony provided to US media.

Anderson said Bolton had cautioned that Giuliani “was a key voice with the present on Ukraine which could be an obstacle to increased White House engagement” with Zelenskyy, according to reports.

Deputy Secretary of State John Sullivan, the number-two at the State Department who has been nominated by Trump to be the US ambassador to Russia, appeared in a public hearing before the Senate Foreign Relations Committee on WEdnesday.

Under questioning from Democrats, Sullivan said he was told by Pompeo former Ukraine Ambassador Marie Yovanovitch had been recalled because Trump “had lost confidence” in her. Yovanovitch had been working against Giuliani’s attempts to get Ukraine to investigate the Bidens.

Sullivan confirmed that Giuliani had been running a smear campaign against Yovanovitch. Sullivan also said a president using his office to solicit investigations into political opponents was not “in accord with our values”.

Six things that happened this week