The United States and Guatemala signed a migration deal on Friday just days after US President Donald Trump threatened to impose tariffs on the Central American country if it did enter into a so-called “safe third country” agreement. 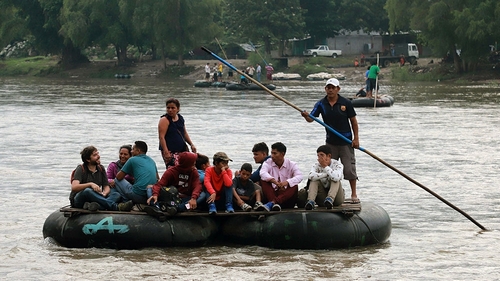 Locals and Central American migrants use a makeshift raft across the Suchiate river from Tecun Uman in Guatemala, to Ciudad Hidalgo in Chiapas State, Mexico Quetzalli Blanco/AFP

The Guatemalan government said the deal would apply to citizens from Honduras and El Salvador. It did not say whether it had signed a safe third country agreement.

But Trump, speaking to reporters, described the agreement as such, saying it would “provide safety to legitimate asylum seekers and stop asylum fraud”.

Any safe third country agreement would require migrants, including Salvadorans and Hondurans, who cross into Guatemala on their way to the US to apply for protections in Guatemala instead of at the US border. But immigrant rights groups have said that Guatemala is not equipped to take asylum seekers, especially as thousands of Guatemalans flee poverty, unemployment and violence in the country for the US.

According to US government data, Guatemala has the highest number of migrants and asylum seekers apprehended at the US southern border.

Guatemala and the US had been negotiating such an agreement for months, and Trump threatened Wednesday to place tariffs or other consequences on Guatemala if it did not reach a deal.

It’s not clear how the agreement will take effect. Guatemala’s Constitutional Court granted three injunctions preventing its government from entering into a deal. The court said Morales could not sign the safe third country agreement without prior approval from Congress, which is on a summer recess.

Guatemala’s President Jimmy Morales cancelled a trip to Washington, DC, earlier this month after the Court’s ruling. Trump then said he was considering a “ban”, tariffs and remittance fees on Guatemala.

After the threat, Guatemala blamed “national actors” for damaging relations with the US and said they would be responsible if Trump put tariffs on the Central American country.

On Friday, Guatemala’s government said the migration deal will apply to Honduran and Salvadoran citizens. It said the deal aimed to counter social and economic repercussions by the US.

It also said that in the coming days an accord would be signed to grant temporary visas for Guatemalans to work in certain US sectors, including the construction and service.

Speaking to reporters at the White House during a signing ceremony, Trump said the agreement would allow easier access to farmer workers for US farms and ranches.

He said that as part of the agreement, the US would increase access to the H-2A visa programme for temporary agricultural workers from Guatemala.

Trump has made restricting immigration a cornerstone of his presidency and re-election campaign. He has pushed Guatemala, Mexico and other countries in the region to act as buffer zones and take in asylum seekers who would otherwise go to the US.

Friday’s agreement comes after a court in California blocked Trump’s most restrictive asylum effort to date, one that would effectively end protections at the southern border.