Britain’s Prime Minister Boris Johnson has addressed the lower house of UK’s parliament, saying his government’s mission is to deliver Brexit on October 31 and urging the European Union to renegotiate the divorce deal. 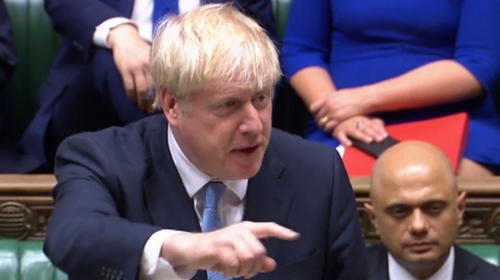 Speaking to MPs on Thursday, a day after he took Britain’s top job, Johnson said the step was needed “for the purpose of uniting and re-energising our great United Kingdom and making this country the greatest place on Earth.”

He also vowed to restore British people’s trust in democracy, saying that leaving the EU on the October 31 deadline was one way of achieving that.

“I and all the ministers are committed to leaving the EU on this date whatever the circumstances. And to do otherwise would cause a catastrophic loss of confidence in our political system,” Johnson said.

“I would prefer to leave the EU with a deal, I would much prefer it. I believe that it is possible even at this late stage and I will work flat out to make it happen.”

He said the withdrawal agreement negotiated by his predecessor Theresa May “signed away” the UK’s economic independence and self-government as it allowed a free-flowing border between EU member Ireland and Britain’s Northern Ireland, known as a backstop.

“A time limit is not enough if an agreement is to be reached. It must be clearly understood that the way to the deal goes by way of abolition of the backstop,” he said, urging the EU “to rethink” their current refusal to renegotiate the Brexit deal.

“If they do not, we will, of course, have to leave the EU without an agreement. The UK is better prepared for that situation than many believe,” Johnson said.

Johnson also confirmed that Britain would not nominate anyone to the European Commission which takes office on November 1.

Addressing the parliament after Johnson, Labour leader Jeremy Corbyn said his party would oppose any Brexit deal brought forward by Johnson if it does not protect jobs, workers rights and the environment.

“Labour will oppose any deal that fails to protect jobs, workers’ rights or environmental protections, and if he Johnson has the confidence to put that decision back to the people, we will campaign to ‘Remain’,” Corbyn told MPs.

Earlier on Thursday, Johnson chaired the first meeting of his cabinet made up of a mix of social conservatives and Brexit hardliners.

The Labour opposition-backing Mirror newspaper called it “Britain’s most right-wing government since the 1980s”.

Johnson argues that his threat of a chaotic “no-deal” divorce will force EU leaders to relent and give Britain better terms that would let it pursue trade deals with powers like China and the United States.

Johnson’s solution for the frontier revolves around proposals that have been rejected as either unworkable or insufficient by both EU and Irish leaders.

Irish Prime Minister Leo Varadkar – his heavily trade-dependent nation standing to lose most from a messy EU-UK split – bluntly told Johnson on Wednesday that he needed to compromise.

“Any suggestion that there can be a whole new deal and negotiated in weeks or months is totally not in the real world,” he said.

A YouGov survey found Johnson’s approval rating in Britain as a whole at just 31 percent.