Southern California has been rocked by a magnitude-6.4 earthquake, the US Geological Survey (USGS) said, with authorities warning that the tremor, the largest in two decades, might not be the day’s last.

The powerful earthquake struck near the city of Ridgecrest, about 175km northeast of Los Angeles USGS

The powerful earthquake struck near the city of Ridgecrest, about 175km northeast of Los Angeles, on Thursday. Emergency responders did not immediately report mass injuries or any deaths, but USGS seismologist Rob Graves said that “this earthquake is large enough that the shaking could have caused damage”.

The Kern County Fire Department said on Twitter it was working on “nearly two dozens incidents ranging from medical assistance to structure fires in and around the city of Ridgecrest, CA.”

This included “buildings with minor cracks; broken water mains; power lines down; rock slides on certain roads” but no injuries or fires.

Ridgecrest Mayor Peggy Breedon said the city was dealing with fires and broken gas lines, as well as falling objects that hit people, as the city endured many aftershocks.

“We are used to earthquakes but we’re not used to this significance,” she told MSNBC.

The quake is the largest in Southern California since the 1994 magnitude-6.6 Northridge earthquake, which was centred in a heavily populated area of Los Angeles and caused billions of dollars of damage, USGS geophysicist Paul Caruso said. 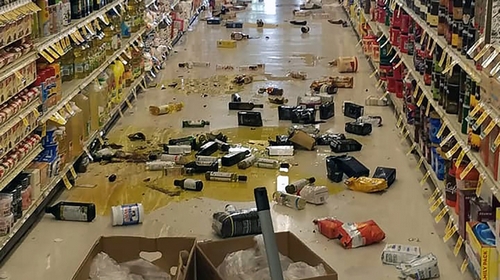 Broken bottles and other goods in a store in Lake Isabella, California after the quake hit Southern California. HO/AFP

Breedon said she had never felt an earthquake “like this long rolling” tremor, adding she was driving in her car when it happened and immediately pulled up her emergency brake.

She said the city of Ridgecrest had asked residents to look after others, especially the elderly, which form a large part of the city’s population.

The USGS said the quake was very shallow – only 8.7km – which would have amplified its effect.

The earthquake was felt throughout Los Angeles, as far north as Fresno, and as far east as Las Vegas, Nevada. It was even felt south of the border in Mexico, where buildings were evacuated in Tijuana and Mexicali, according to Baja State officials.

European earthquake agency EMSC said the quake was felt in an area inhabited by 20 million people.

“We were just panicked trying to get out of the house because everything was just falling out of the cabinets, off the shelves, off the walls, pictures… They were flying like missiles off the shelves,” resident April Rodriguez in Trona, California, south of Ridgecrest, said on CNN.

The epicentre was very close to Ridgecrest, a town with a population of more than 27,600 in the high desert. The area is associated with the Eastern California Shear Zone and has suffered earthquake swarms in the past, including a series of some 2,500 tremors over the course of five weeks in the summer of 1995.

According to poweroutage.us, there were some 5,851 customers without power in Kern County.

Temperatures in the area were expected to climb to nearly 37.8C on Thursday, with extremely low humidity, the Weather Channel said.

USGS seismologist Lucy Jones said on CNN the area would be hit by many more aftershocks in the coming days, and could even be hit by a larger quake.

US House will start well-designed impeachment inquiry of Overcome

What is US impeachment? Six things to know