This June, like so many over the past three decades, small armies of graduate students, high school teachers and college faculty descended upon US cities throughout flyover country to score four million Advanced Placement exams in 38 subjects. Or, in recent years, score exam essays and other components from a computer off site, likely at home or in an office. 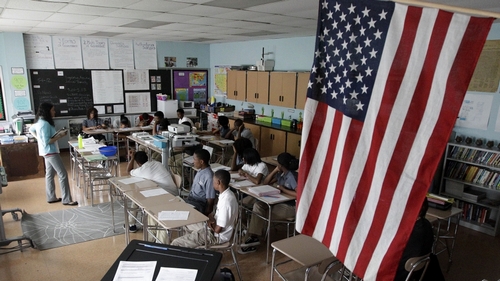 Over one million high school students in the US take Advanced Placement exams every year File: AP

The job of these readers is to help the College Board through the algorithmic powers of the Educational Testing Service (ETS) to determine whether over one million US high school students will earn credits towards their college degrees.

Not so sadly, I was not among them this year. When it comes to a culture of inadvertent racism, my disappointment with scoring AP US and World History exams for the College Board and the ETS knows no bounds.

The testing bias is so strongly Anglo-American and Eurocentric that it lags behind what I taught in my US and World History college courses a quarter-century ago. The AP curriculum leaves many high school instructors ill-equipped to teach about historical nuances that would allow advanced high school students to make a comprehensive college-level history argument, especially on issues related to racism.

Many of the teachers who have scored these exams themselves have displayed their own racism over the years, as they did on t-shirts as part of an event sanctioned by the College Board and the ETS in 2014.

In June 2018, I and a large group of AP World History exam readers scored hundreds of thousands of short answer essays based on a passage from Rudolph Rummel’s Death by Government (1994). “At the extremes of power, totalitarian governments slaughter their people,” while “many democracies can barely…execute even serial murderers,” reads part of the excerpt.

After this passage, there was a three-part short answer question. Part two of the question read: “Explain ONE historical example of a democratic state committing mass violence that would challenge Rummel’s argument regarding democracies and mass violence.”

Many of the 1,200 essays I scored online did not meet the difficult hurdle of raising and explaining cogent examples of democratic states condoning mass violence. Some of the essays I scored, though, came from students who had used America’s involvement in the Transatlantic slave trade (via Article I, Section 9 of the US Constitution) or in slavery in general as an example of democratically-sanctioned mass violence.

By the second day, however, my scoring leader relayed the message that readers could not assign students credit for successfully identifying and explaining slavery in this way. The reason? “It has to be framed in terms of state policy – in the US case, federal police,” my scoring leader said.

The College Board and the ETS had created a nearly impossible hurdle for students because a “federal police” force did not exist in any significant form prior to the 1850s. At the same time, scorers received the message that students who used the US internment of Japanese-Americans under President Franklin D Roosevelt’s Executive Order 9066 as an example were to receive full credit.

I raised the hypocrisy of not giving students credit for slavery’s mass violence versus the relative non-violence of Japanese internment as an issue with my scoring leader. “We debated this issue quite a bit and we are constantly discussing how ‘mass’ mass violence needs to be among ourselves over here. We came down on this one by suggesting that the act of internment was a governmental act of mass violence,” was what my scoring leader said in an exchange.

By “we” my scoring leader meant herself, the other scoring leaders, and the supervising question leader in charge of managing the scoring of student responses for this specific essay question. They would have all been part of the debate over what constituted a “governmental act of mass violence”.

Question leaders, in turn, report such issues like this to their superiors, the chief reader and the exam leaders for the AP World History exam. The College Board categorises chief readers and exam leaders as “AP Program Representatives”. To be clear, my scoring leader could not have acted on her own to recalibrate how readers like me rated students’ short-answer responses, because someone further up the chain of supervision would have noticed.

For the powers in charge of the AP World History exam’s scoring, then, slavery did not count as government-sanctioned mass violence. Perhaps they chose to ignore the Fugitive Slave Act of 1793, which required officials to report and capture runaway slaves to authorities anywhere in the United States, and the Missouri Compromise (1819), the Compromise of 1850, the Kansas-Nebraska Act (1854), and the Supreme Court’s Dred Scott decision (1857).

All of these documents expanded slavery to all territories under US control. All of them meant that even the freedom of thousands of free blacks in states and territories that had outlawed slavery could be in jeopardy. Solomon Northup’s 12 Years a Slave comes to mind as but one example of this chilling, government-sanctioned reality.

The Fall 2017 AP World History curriculum framework, though, does not mention the role of governments as something teachers ought to consider when teaching on the expansion of slavery in the Western Hemisphere. “The growth of the plantation economy increased the demand for slaves in the Americas” is as close the framework’s authors get to saying that slavery was a state-sanctioned labour system, not once addressing it as a form of mass violence.

Such a vague reference to the centrality of slavery in the modern world can allow students and teachers to make ill-informed historical assumptions or traffic in racist stereotypes. Any history teacher who has students able to raise American slavery as an example of mass violence but who are unable to explain their assertion has not taught their students how to make proper historical intuitive leaps.

If educators cannot agree that the US government sanctioned slavery, and that this sanctioning legitimised mass violence toward millions, then what are America’s allegedly best history teachers really teaching their students?

The problem with so much of the work of The College Board and the ETS is the politics of American education and the assumptions of Western progress embedded within. For the exam’s designers, the rise of democratically-led nation states in the West and the move towards a less-violent, globalised world was their trope for this question. Chattel slavery will always serve as a complicating counternarrative to The College Board’s trope of the West’s continual social and political progress.

Last fall, The College Board released its full scoring guidelines, samples, and commentary on the 2018 Advanced Placement World History exam. For those on the outside looking in, there was no controversy. But as someone who has scored both AP World and US History exam essays seven times in the past decade, I know this release sanitised the implicit racism built into the scoring process of these exams. The whitewashing of American slavery as not state-sanctioned violence serves as but one example.

The College Board’s recent decision to add 250 years back to the revised AP World History curriculum that they have scheduled for implementation in 2019-2020 is another example of its educational politics.

The bulk of the curriculum (which begins around 1200 CE) still focuses on how the West came to dominate the rest of the world and avoids the rise of Islam and the development of major civilisations in Africa, Asia, and the Americas. The earlier revisions had the course beginning in 1450 CE, making it barely discernible from AP European History.

I have been reluctant to speak up about such things publicly because I have been a not-quite full-time college professor who has depended on my ETS cheques to get through the summer months.

But I have now decided I will not ever score for the College Board and the ETS again, despite potential financial need I might have moving forward. One of my jobs as a historian is to dispel myths and speak the truth for the marginalised. I have never been more at odds with an educational endeavour.