This packed committee room on Capitol Hill, with its high ceiling, wood panelled back wall and gold-framed portraits of politicians past was, some hoped, to be the scene of Donald Trump’s downfall as Mueller talked through his report on Russian election meddling, point by devastating point. “We want Bob Mueller to bring it to life,” the House intelligence committee chairman, Adam Schiff, had said.

Cameras stood ready. Photographers crouched. Reporters sat elbow to elbow with laptops on knees. Congressmen and women waited in their seats expectantly. And in he came: Robert Mueller, the former special counsel dubbed “America’s straightest arrow”, a man whose silent mystique was such that it took Robert De Niro to play him on TV.

But once Wednesday’s seven-hour House committee hearings got under way, the welcoming smiles froze on Democratic faces, like a theatre audience realising they bought expensive tickets to the wrong show. It slowly dawned that Mueller was neither going to offer a pugnacious defence of his findings nor bring them into focus for the American public with piercing clarity. Instead the 74-year-old struggled, asking for questions to be repeated, laboriously looking up page references and offering halting, monosyllabic answers.

Invited to deliver punchlines, he pulled his punches instead. When the New York congressman Hakeem Jeffries delivered a stirring soliloquy about defining obstruction of justice – “This is the United States of America! No one is above the law. No one. The president must be held accountable one way or the other” – and looked to Mueller for affirmation, the former FBI director replied: “Let me – let me just say I, if I might: I don’t subscribe necessarily to your – the way you analyse that. I’m not saying it’s out of the ballpark, but I’m not supportive of that analytical charge.”

Soon enough the reviews were in: far from bringing the report to life, it was a dying fall, one that revealed Mueller to be a mere mortal after all. The backlash was swift.

Comedian Bill Maher wrote on Twitter: “I can’t watch this anymore. Go home, guys. You made OJ try on the glove, and it just didn’t work. You can still win the election, but I wouldn’t bet my own money on it.”

Michael Moore, the Oscar-winning documentary film-maker, tweeted: “A frail old man, unable to remember things, stumbling, refusing to answer basic questions…I said it in 2017 and Mueller confirmed it today – All you pundits and moderates and lame Dems who told the public to put their faith in the esteemed Robert Mueller – just STFU from now on.”

What went wrong? Why did Democrats not realise that Mueller would not only be a unwilling witness but seemingly unversed in his own report? And was it, as Republicans gleefully claimed, the kiss of death to both the Russia investigation and demands for Trump’s impeachment?

Some of it was predictable. The former special counsel had cautioned in advance that he had no intention of embellishing the report he published three months ago. Bill Galston, a former policy adviser to Bill Clinton, said: “Mr Mueller made his intentions crystal clear. He was not there to be a player in anyone’s movie. The Democrats may have thought they had little to lose and that Mr Mueller may be goaded by the more pugnacious Republicans into a moment that would go viral.”

Some of it was a shock. The Washington Post reported: “Many felt blindsided that no one warned them how much Mueller had aged – and regretful that they had forced a decorated Vietnam veteran and longtime civil servant into testifying when he was so reluctant in the first place.” 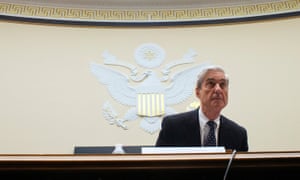 The perceived flop left some suggesting that Democrats are now flogging a dead horse and should change direction. The New York congressman Anthony Brindisi told the Post on Thursday: “Anyone who was looking for the smoking gun yesterday didn’t get it. It’s time to move on and focus on getting some bills passed here that can get signed into law.”

But Democratic leaders argue there is a principle at stake. It is their constitutional duty, they say, to chase down every lead in the Mueller report, call more witnesses and put it all before the public. Failure to do so would imply that Trump is above the law and set the worst possible example for future presidents.

At a press conference, the Maryland congressman Elijah Cummings spoke passionately about the big picture: “Martin Luther King said … ‘There comes a point when silence becomes betrayal.’ And we refuse to betray generations yet unborn and the American people. We’re not going to betray them. We’re accumulating information and doing the best we can … We’re going to do our part to make sure that we have a democracy that’s intact.”

To that end, the hearings did enable Mueller to refute, on camera, Trump’s claim that Russian meddling is a “hoax”, that the investigation was a “witch-hunt” or that it gave him “total exoneration”. In rare expressions of opinion, Mueller described Trump’s praise of WikiLeaks as “problematic” and gravely warned that Russia will continue to attack US democracy. Future historians may judge the transcripts damning for the president.

Bob Shrum, a Democratic strategist and political science professor at the University of Southern California, said: “The point was to get Mueller’s conclusions front and centre with the American people because most folks don’t read a 448-page report. It had a degree of success: more people heard that Mueller did not exonerate the president and a lot of the information got out in a way it hadn’t before. But a lot of the commentariat judged it like a reality TV show and Mueller was low-key and hard of hearing.”

I think the best way to defeat him is at the ballot box. At this point impeachment is a distraction

Nearly a hundred House Democrats favour impeachment and presumably hoped that Mueller’s testimony would be a game-changer. But Shrum said: “I think Wednesday sent a clear signal that’s not the way to go. The president would do everything to resist, put up roadblocks and challenge it in court. I think the best way to defeat him is at the ballot box. At this point impeachment is a distraction.”

It is a view long held by Nancy Pelosi, the House speaker, aware that a recent Washington Post-ABC News poll found 59% of Americans said the House should not begin impeachment proceedings and that the Republican-controlled Senate would not convict in any case. The failure of the hearings to supercharge demands for impeachment therefore worked to her advantage. A ruthless pragmatist, perhaps she guessed all along that the format would fizzle.

Wendy Schiller, a political science professor at Brown University in Providence, Rhode Island, said: “Mueller’s lacklustre testimony likely gave Speaker Pelosi the ammunition to withstand calls for impeachment inquiries, or hearings, from the left flank of her party. She has always maintained it is a losing political proposition even if the House voted to impeach Trump because the Senate will not vote to convict Trump and remove him from office.”

Although Mueller did not generate enough sound bites to be used across media platforms in the election campaign, Schiller added, “the lurking danger for Trump is that among independent voters, who leaned toward him in 2016, there is discomfort with the way he conducts himself.

“For now, the strong economy is insulating Trump against that discomfort, but any downturn in the economy next summer or in fall 2020 might lead those voters to either stay home, or vote for someone other than Trump. And in some swing states, that could be enough to cost him the election.”

The Democrats seeking the presidency have been talking about healthcare, economic inequality and racial injustice and saying much less about Mueller or impeachment on the campaign trail.

Galston, a senior fellow at the Brookings Institution thinktank, said: “I think the candidates on the stump are being politically realistic; the people back in Washington aren’t. Nancy Pelosi, who is a wintry eyed realist, is having none of it: she thinks impeachment is a fools’ errand and I have to say I agree with her.”