The top United States diplomat in Ukraine, testifying on Wednesday in the first televised hearing of the impeachment inquiry against Donald Trump, linked the president more directly to a pressure campaign on Kyiv to conduct investigations that would benefit him politically.

William Taylor was one of two witnesses who testified before the US House of Representatives Intelligence Committee as a crucial new phase began in the impeachment inquiry that threatens Trump’s presidency even as he seeks re-election in 2020.

Both Taylor and Deputy Assistant Secretary George Kent testified about their concerns regarding pressure by Trump and allies to get Ukraine to investigate Democratic political rival Joe Biden in a dramatic hearing that pitted Democratic and Republican politicians against each other.

Although the hearing turned contentious at times – including sniping between committee members – it remains unclear if the testimony given by the two witnesses gave Democrats the ammunition they need to advance their argument that Trump has committed misdeeds worthy of removing him from office.

An important disclosure came from Taylor, acting ambassador to Ukraine, who pointed to the Republican president’s keen interest in getting Ukraine to investigate Biden, a former vice president, and reiterated his understanding that $391m in US security aid was withheld from Kyiv unless it cooperated.

Taylor said a member of his staff overheard a July 26 phone call between Trump and Gordon Sondland, a former political donor appointed as the US ambassador to the European Union, in which the Republican president asked about those investigations and Sondland told him that the Ukrainians were ready to proceed. 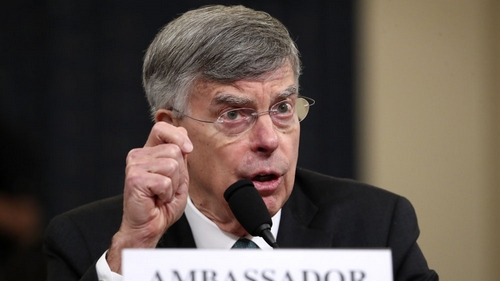 Trump’s personal lawyer Rudy Giuliani had been pushing Ukrainian officials to announce investigations of former Vice President Joe Biden and his son Hunter who had served on the board of Burisma, a Ukrainian gas company. There has been no evidence of wrongdoing by the Bidens.

Following the phone call with Trump, Taylor’s staff member asked what the president thought about Ukraine. Sondland responded “that President Trump cares more about the investigations of Biden, which Giuliani as pressing for,” Taylor said.

Asked about the call by reporters at the White House on Wednesday, Trump said he does not remember it.

Trump has labelled the impeachment inquiry a “witch-hunt” and a “scam”.

Taylor and Kent testified for more than five hours before the Intelligence Committee which is leading the Democrat-led House impeachment inquiry.

“The portrait that their testimony paints was one of an attempt that ran through the president, Acting Chief of Staff Mick Mulvaney, Ambassador Sondland, Ambassador Kurt Volker on down to Rudy Giuliani in which the president sought to advance his personal political interest at the expense of the United States national security,” said Representative Adam Schiff, chairman of the Intelligence Committee.

“The president did that by pressing this vulnerable ally to get involved in the next presidential election in a way that the president thought would advance his reelection prospects,” Schiff told reporters after the hearing. 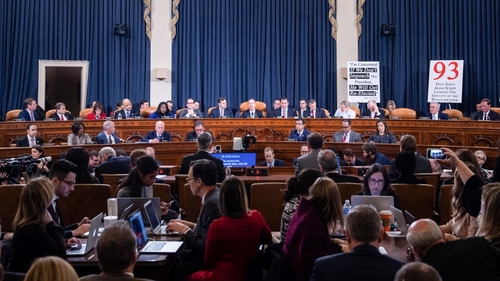 Republicans argued that Taylor and Kent’s testimony did not directly involve the president, but was based on words of others and ultimately gave a false impression of Trump’s actual actions and motives.

“Most of this was about hearsay, he said – she said and I presume,” Representative Mark Meadows, one of Trump’s key Republican defenders in the House, told reporters.

“When you use those qualifiers, the testimony becomes less compelling,” said Meadows, who leads the House Freedom Caucus of conservative Republican members. “Based on my conversations with the president, it was not a directive from the president.”

Democrats, however, found Taylor and Kent to be credible.

“You could tell he is not a political guy. He doesn’t overreach. He took careful notes and he stuck to his notes with regard to calls,” Krishnamoorthi said.

Krishnamoorthi discounted the Republican demands to call the whistle-blower to testify publicly before the committee.

“At this point, we have so many first-hand accounts, it’s akin to trying to figure out who pulled the fire alarm when we are battling the smoke and flames,” he said. “We are dealing with the heart of the scandal. There are so many witnesses coming forward. We have got to listen to them.” 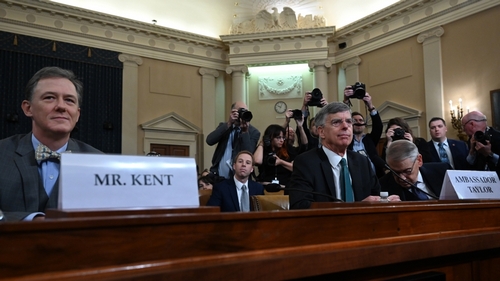 The impeachment inquiry will hear publicly on Friday from former Ukraine Ambassador Marie Yovanovitch, a well-respected career diplomat who was recalled from Kyiv by Trump after a disinformation campaign against her by Giuliani.

Several additional witnesses are scheduled to testify next week, including Army Lieutenant-Colonel Alexander Vindman, a Ukraine specialist and White House national security aide who listened to Trump’s call with Zelenskyy and was alarmed by what was said.

With additional reporting by William Roberts in Washington, DC.

US releases video it claims shows Iran removing mine from tanker

UN General Assembly 2019: Speaker schedule and what to expect