Chicago, Illinois – Chicago Public Schools (CPS) teachers walked out of their classrooms and joined the picket lines on Thursday after the school district and the Chicago Teachers Union failed to reach a contract agreement, after months of negotiations.

Annie Kellogg teaches preschool special education at Brentano Elementary Math & Science Academy in Chicago’s Northwest side. Like many Chicago Teachers Union members, she is demanding the city provide more funding for social services and support staff such as nurses and counselors on site.

“We need more counselors, we need case managers, we need mental health services to help support our students,” Kellogg told Al Jazeera. “A lot of our students and many, many in Chicago are going through severe trauma, and they need the support,” she said. 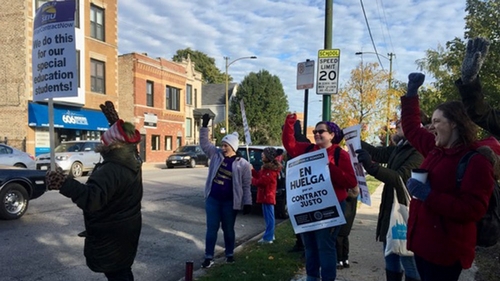 More than 25,000 members of the Chicago Teachers Union (CTU), as well as thousands of school support employees stopped work after 10 months of talks between the city and the union.

Aaron Bingea teaches seventh and eighth grade math at Brentano, where he says he spends $1,000 to $2,000 of his own money every year on school supplies for his classroom.

Chicago Mayor Lori Lightfoot criticised the CTU and said the strike comes at a time when the union and CPS had been making “concerted progress” towards agreeing on new teachers’ contracts.

“CTU hasn’t gotten the message,” Lightfoot said at a news conference on Wednesday. “Agreeing to an extra $2.5bn a year in costs would be completely irresponsible at any time, but especially in the economic times that we face now.”

It has been seven years since teachers last went on strike in Chicago. For years, the CTU and the CPS have been at odds attempting to balance teachers’ needs with city resources and budgetary priorities, with the most recent round of negotiations beginning in January of this year.

CTU President Jesse Sharkey said the teachers are striking to create “the schools our students deserve”, which would include increased support staff such as teachers’ assistants, nurses, librarians and social workers to “address high levels of trauma among students”.

CTU has repeatedly said their priorities are classroom size, better pay and benefits and fully staffed schools. The union also said it is prioritising social justice for students, focusing on affordable housing, sustainability and sanctuary schools for undocumented children.

CPS’s proposed offer to teachers included $400,000 dedicated to hiring support staff, $1m dedicated to reducing classroom sizes and a 16-percent pay rise over five years. Of their proposal, CPS said, “In five years, the average teacher will make about $100,000.”

The teachers’ union rejected the offer, saying the pay increase would “still leave the majority of teaching assistants and school clerks mired in poverty in year five of the contract”. 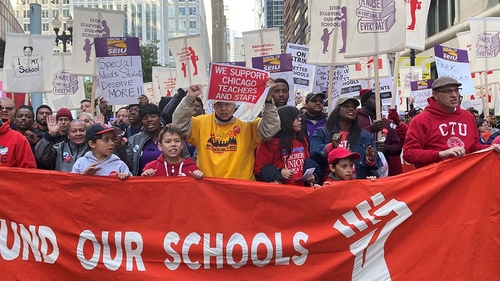 The $400,000 dedicated to hiring additional support staff, the union stated, represents a “fraction of a hundredth of a percent” of the CPS annual $7.7bn budget, and that the $1m in funding offered to address classroom shortages would only allow the district to hire about two dozen teachers and their assistants.

It has been nearly five months since the city presented its counteroffer to the CTU, a point Mayor Lightfoot and CPS CEO Janice Jackson emphasised in the days leading up to the strike.

“Based on the fact that it is now day 145 without a comprehensive written counteroffer, it appears that CTU is refusing to negotiate in good faith, and instead is determined to strike at all costs,” the mayor and the CEO said in a joint statement on October 11.

Cancer trial in Mexico has shrunk an inoperable tumour

CTU, however, maintains that the city must provide explicit language on hard caps for classroom sizes, and that the proposed funding will do little to improve staffing shortages and classroom sizes, which have grown steadily over the past several years.

School buildings will remain open for the more than 360,000 CPS students to spend their days during the strike. The facilities will provide breakfast and lunch for children at those schools, which will be staffed by CPS administrative staff.

Chicago’s strike comes after a wave of similar work stoppages last year across the country over pay, resources and classroom sizes.
The teachers on Wednesday were joined by students and parents.